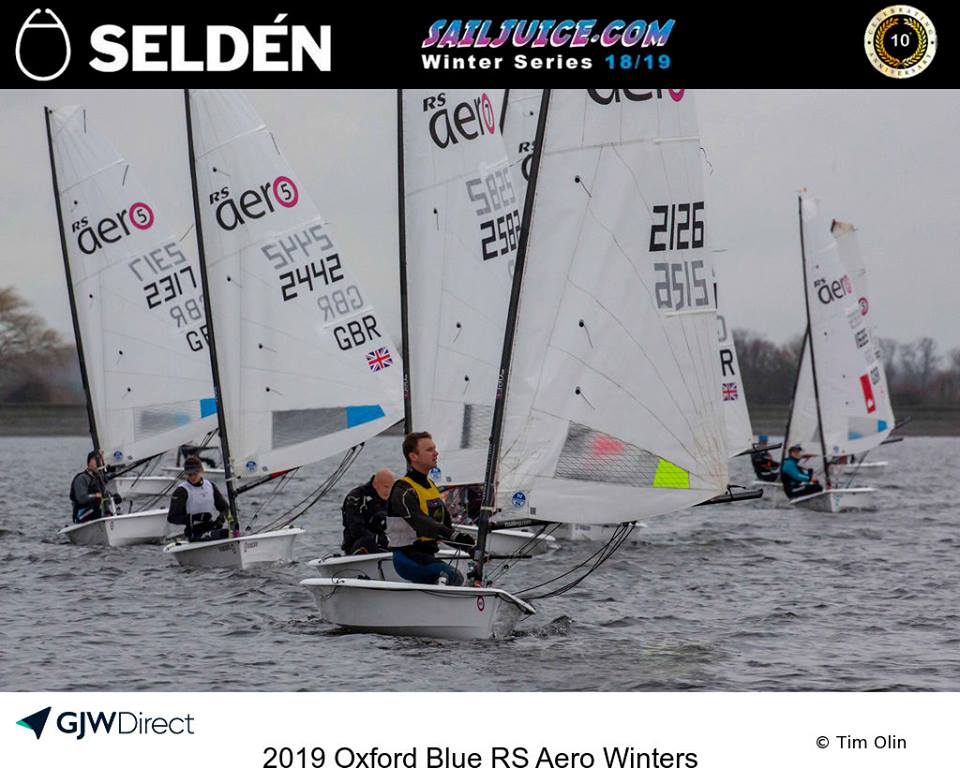 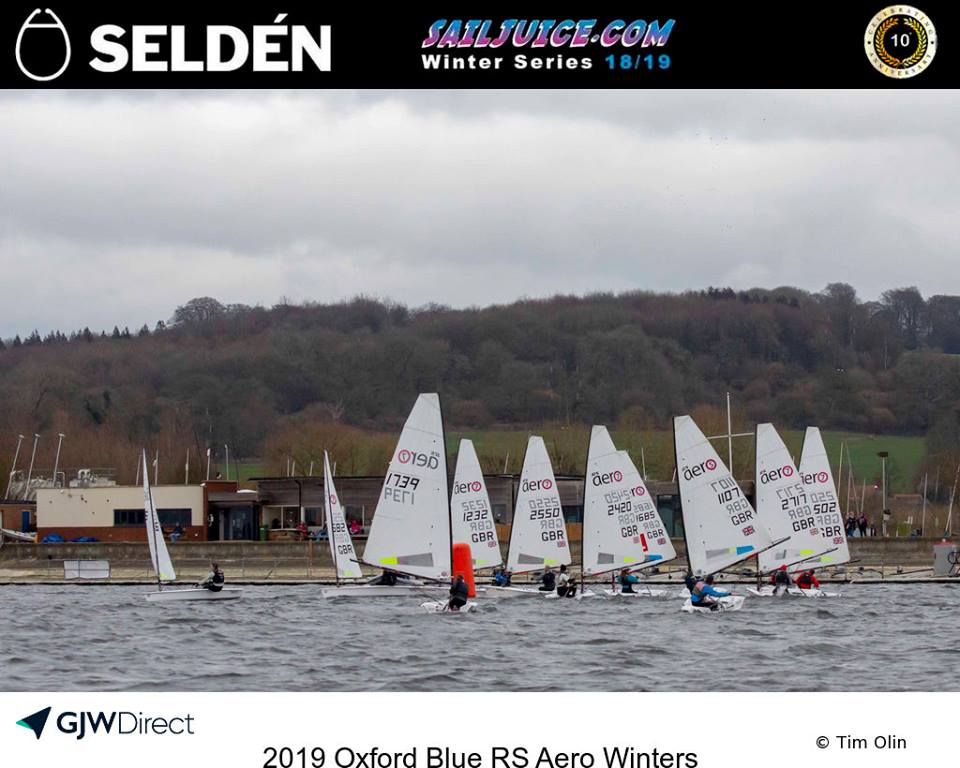 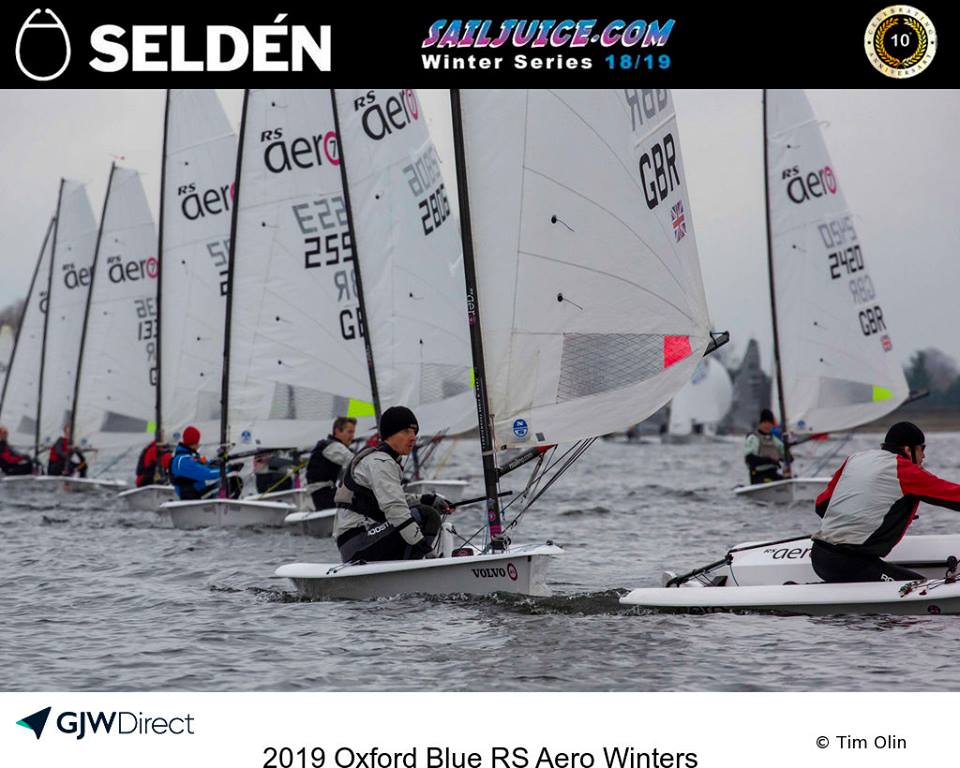 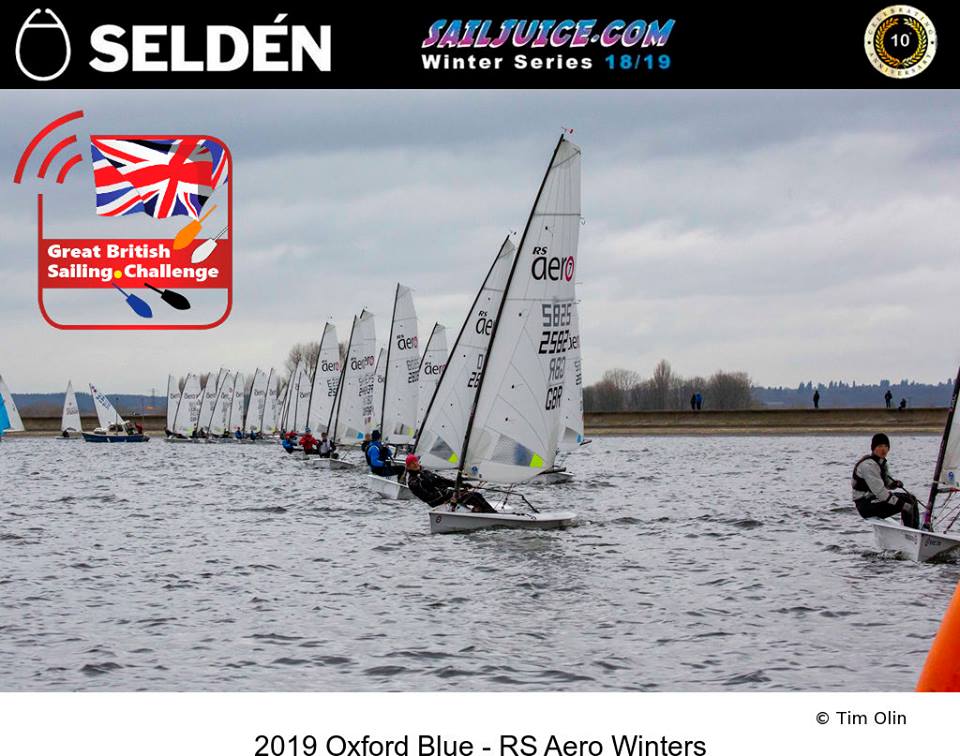 RS Aero UK Winter Championships at The Oxford Blue - 16th Feb
Wow, what a day!
Thanks to Tim Hire for summing up an excellent day's racing at Oxford;
Whilst pleasantly mild the weather for the 2019 edition of The Oxford Blue was challenging, with lightish winds for the 6th edition. The Oxford Blue played host to both the finale of the Selden SailJuice series, but also to the RS Aero UK Winter Championship. With a whopping 48 of the 153 boats taking part being RS Aeros, a third of the entries, we were given a start for the three RS Aero Classes.

Race 1 set the precedent, with inconsistent gusts and shifts being the challenge of the day. As the first race started, the wind was very light. First to the windward mark was Mark Addison in an RS Aero 9 followed the RS Aero 7 of Charlie Roome in his first RS Aero race! The first RS Aero 5, a little way behind, was Jonathan Bailey. The lead RS Aero 9 of Gareth Griffiths was first to cross the line. It was Chris Hatton in a RS Aero 7, who had a great first race taking the RS Aero win on handicap and an impressive 3rd overall after not the best of starts. Jonathan Bailey was the first RS Aero 5.

By Race 2 the wind had picked up a bit, although it was no less shifty! Richard Pye led around the windward mark followed by Tim Hire and Chris Larr (who went on to cross the line first) in his RS Aero 9, with the rest of the pack chasing closely. In the RS Aero 5 race Emily Davis was first around the windward mark followed by Lucy Greenwood and Ben Poe. Peter Barton made huge gains over on the right on the last beat, making up several places to catch the leaders who were now Charlie Sansom and Tim Hire, before effecting the overtaking manoeuvre on the final downwind to take a well-deserved win on handicap. Charlie and Tim were declared a dead heat as they crossed the line. Lucy Greenwood had an excellent race finishing 1st RS Aero 5 and 8th equal RS Aero on handicap.

Race 3 was delayed slightly while the race committee speedily rotated the course. First to the windward mark was Mark Addison in the RS Aero 9 followed by Charlie Roome and Nick Neve in their RS Aero 7s, all charging in from the left. In the RS Aero 5 race, Josie Meredith was first to the windward mark followed by Theodore Deverell and Maisie Bristow. The wind picked up right at the end of the race, allowing those behind to make gains on the leaders on the downwind, producing a tense finale right up to the gun. Gareth Griffiths crossed the line first in the RS Aero 9. Tim Hire managed to hold off Peter Barton for the RS Aero 7 and RS Aero handicap win, with Mark Riddington right behind. Theodore Deverell finished 1st RS Aero 5 and 21st on handicap.

It was great to see so many RS Aero 5s out, the second largest fleet at the event after the RS Aero 7s! It made for great racing for the fleet, with a variety of people showing their faces at the front of the fleet including Alice Lucy who took 3rd RS Aero 5 in Race 1, which was her first ever championship top 3 finish. Lucy Greenwood showed us that consistency was key and took the RS Aero 5 win and Top RS Aero Lady when the results were extracted from the rest of the fleet.

The RS Aeros, in general, placed very well in the overall results for the whole event, with five RS Aeros squeezing into the top 12, the first time we have achieved this in five years - we must be getting faster! After three races, Peter Barton came out on top in the RS Aero7s in 6th overall by half a point to Tim Hire (Top Youth). Chris Hatton was 3rd RS Aero in the Oxford Blue in 9th overall but after the RS Aero results were extracted from the rest of the fleet, Mark Riddington managed to slip past Chris to take 3rd. First RS Aero 9 and Top Master was Gareth Griffiths in 15th overall. Top Youth Lady was Caitlin Atkin from Whitstable SC in her RS Aero 7.
Thanks to SailJuice, SailRacer and Selden for an excellent Selden SailJuice Series and to Oxford SC for being wonderful hosts and running a fantastic day's racing.
Y&Y Overall Oxford Blue Report
Larger Photos by Tim Olin
Facebook Album by Tim Oin
The Prize Giving for the RS Aero UK Winter Series, the UK Winter Champs and the Sail Voucher Prize Draw will take place at the RS Aero UK Spring Champs at Island Barn RSC on Saturday 27th April.

Next up - The last two events on the RS Aero UK Winter Series are the Frensham Frenzy on Sunday 10th March and the Starcross Steamer on Saturday 16th March.
UK Events List