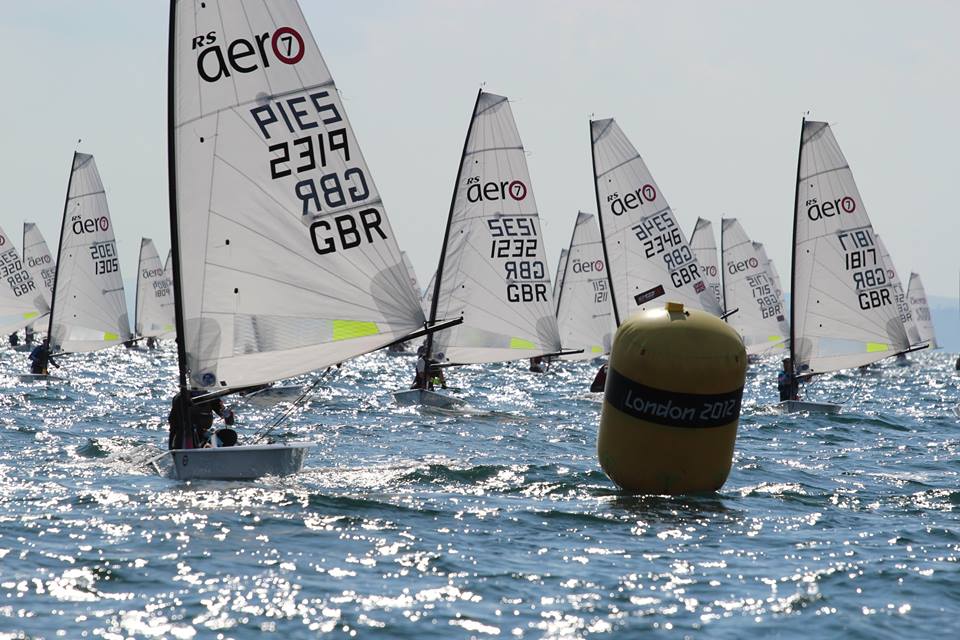 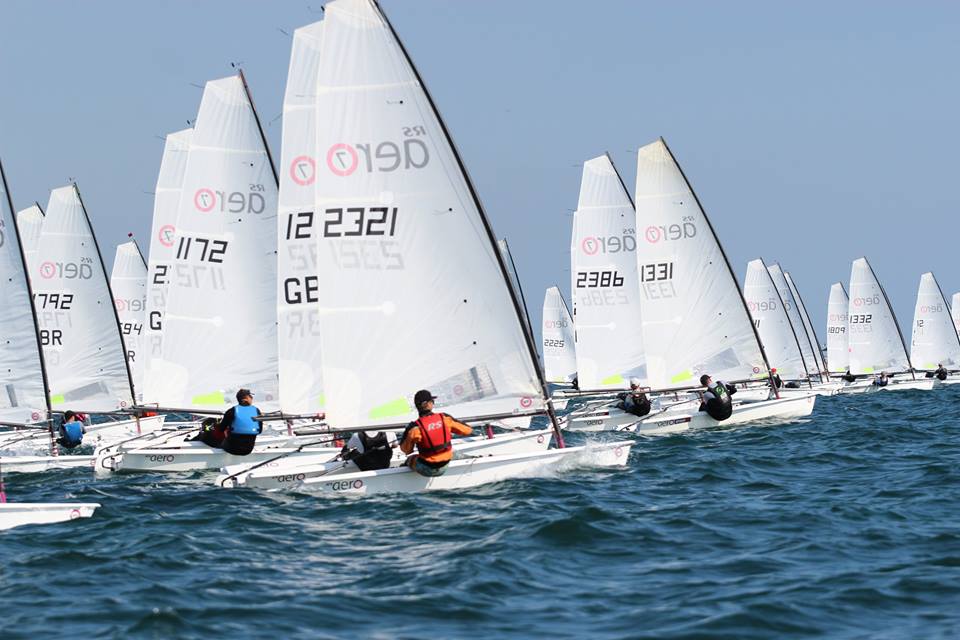 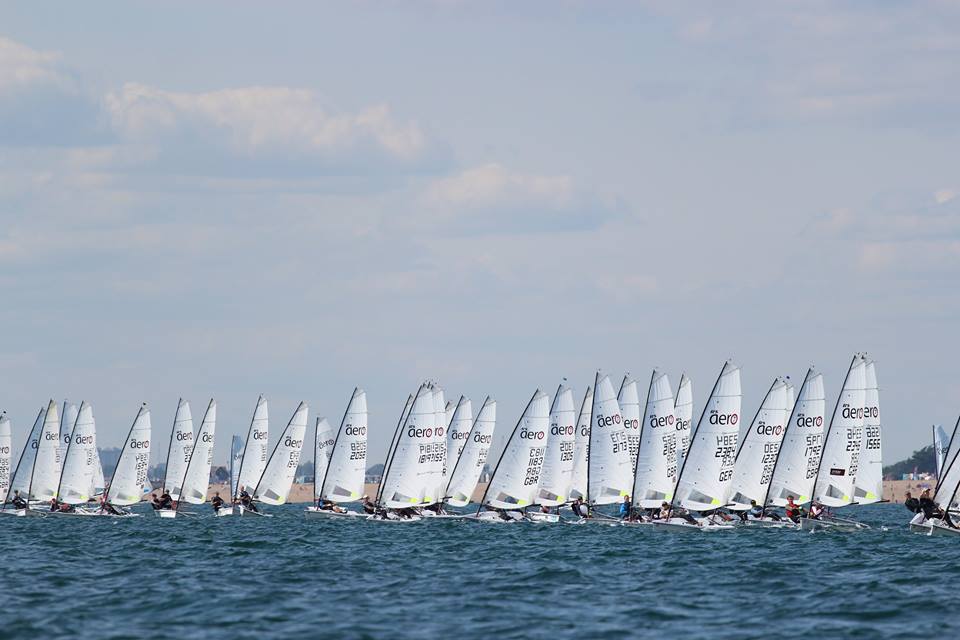 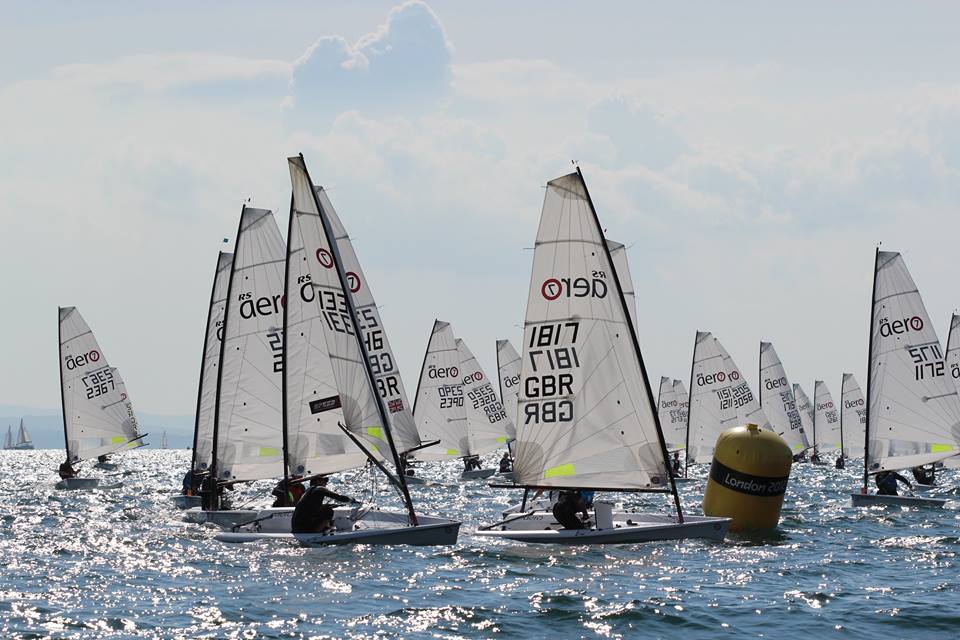 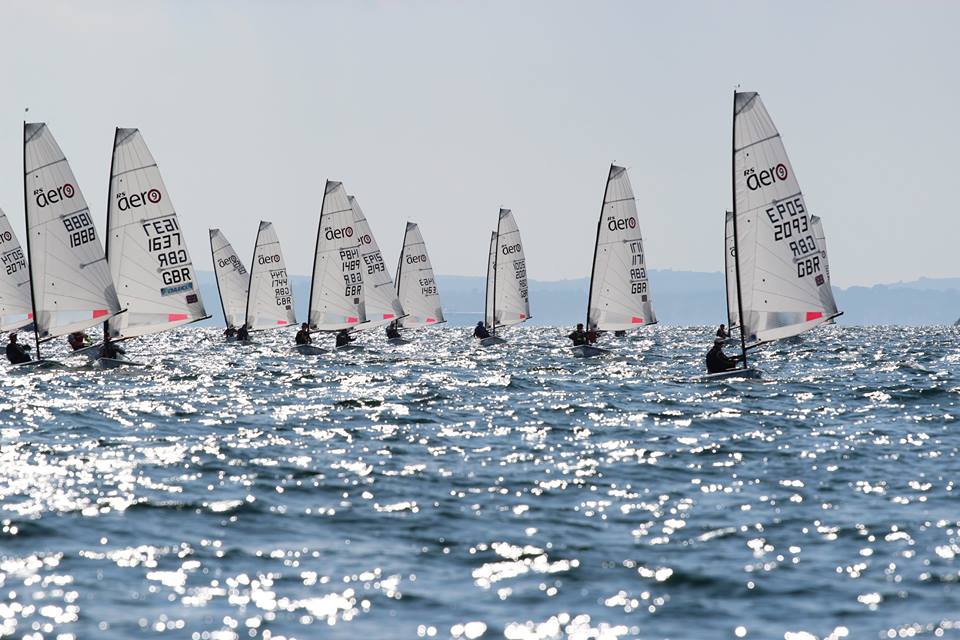 
The 2017 RS Aero UK Nationals hit a whopping 114 entries, over a 50% increase on last year. This feat is all the more incredible considering the event is only five weeks after the Class’ first World Championship in France with similar numbers!

All three rigs are well represented. This year sees a significant growth in the Youth and Ladies categories, both with over 20% of the total entry. International visitors travelled from France, Germany and Estonia to compete.

Day 0
The Champs kicked off on Thursday ‘Day 0’ with training by Sam Whaley and Ben Whaley of the British Sailing Team. A thorough tuning and technique briefing ashore lead into several short sharp races afloat to practice and warm up.

The coaches blew the whistle on the coached races in time for the 15:00hrs ‘All Aeros’ race for the RS Aero Challenge Cup title. 20kn out on the Bay with some fantastic waves proved an exiting warm up to the main event!

A full Report and Results on Day 0 is HERE.

Day 1
The fleet enjoyed sunshine and a light breeze on Hayling Bay for Day 1 of the Champs. An early light northerly was enough to get the RS Aero 9s started, however, this was short lived and called short as it dwindled. A light southerly sea breeze replaced it and the RS Aero 9 fleet achieved three light races in 5-7kn, to the RS Aero 7 & 5s two.

In the 75 boat RS Aero 7 fleet Ben Whaley (Swanage) took both wins and was also top youth!. Kristo Ounap (Estonia) who finished 2nd in last years Europeans taking the 2nds. Third was big brother, Sam Whaley (Swanage) who assures us he will sort out the sibling pecking order when the wind arrives! World Champ Steve Cockerill (Stokes Bay) is staying in touch in 7th and first Lady is Sarah Smith (Hayling) in 10th.

Many thanks to RS Sailing for providing the ‘RS Sailing Firsty Friday’, the refreshment drinks at the tally board - a good motivator for prompt tallying in! The UK Class AGM followed the daily prizes provided by RS Sailing.

Day 2
With a promise of an increasing sea breeze the 110 entries went afloat in the sunshine for Day 2. It turned out to be a stella day - Hayling at its best! Four races were held for each fleet with the breeze steadily increasing from 7kn to 14kn through the day. In the last two of those races the waves on Hayling Bay built to provide great rides downwind with good technique vital to achieve gains.

In the RS Aero 5 Kate Sargent (Lee on Solent) blitzed the first two to make a comeback to equal 1st overall with Andrew Frost (Sutton Bingham). Liina Kolk (Estonia) holds 3rd one point behind going into the final day.

The 75 boat RS Aero 7 fleet were fresh on their start line incurring a couple of recalls and a number of competitors suffering the Black Flag. British Sailing Team member, Sam Whaley (Swanage) sailed in a class of his own winning all four races, mostly with a big lead to. Three points adrift is younger brother Ben Whaley (Swanage). Kristo Ounap (Estonia) lies in third, only another three points back.

Wins in the RS Aero 9 fleet were taken by Ben Charnley (Ouse), Phil McCoy (Emsworth Slipper) and Peter Barton (Lymington), with Peter one point ahead of Chris Larr (Northampton) going into the final day.

Many thanks to Selden Masts for their turn providing ‘Selden Saturday’, the refreshment drinks for tallies! The daily prize giving and annual swards dinner followed and Ken Fowler of RS Aero Race to Scotland fame came to thank supporters, present the awards and give a brief summary of his inspirational adventure. The fleet later returned to the bar to where Olympic DJ Mark Covell was pumping out tunes to party until late with the Hayling members. A few sore legs and tired heads resulted!

Day 3
With 15kn wind set to increase to 25kn and an ebb tide straight into the southerly breeze the sensible decision was made to sail inside the harbour for the final day’s racing. A quadrilateral course was set over the bank enabling two races to be completed in an increasing 15-20kn breeze whilst depth permitted. Each of the fleet’s scores were close and an enthralling final day of tight racing in the harbour provided an exciting grande finale.

RS Aero 7
Sam Whaley (Swanage) started where he left off the day before with two 1sts to take the RS Aero 7 title and the overall Apprentice (under 22) title. He was pushed hard in each race by brother Ben Whaley (Swanage) who was coping well in the stiff breeze as one of the smaller sailors in the fleet, taking two 2nds, 2nd overall and winner of the overall RS Aero Youth Trophy (under 19). Kristo Ounap (Estonia), our Europeans Silver Medallist from last year, had already done enough to take 3rd overall. RS Aero 7 World Champion, Steve Cockerill (Stokes Bay), continued his comeback into 4th overall and 1st Master.

RS Aero 9
Again just one point split the lead in the RS Aero 9s. Chris Larr and defending 9s champ, Peter Barton, were set to duke it out. Chi harbour is anything but sheltered at the top of the tide in a southerly and the onset of the ebb added to the wind and sea state. With 15kn increasing to 20kn during racing it was all on in the big rigs with controls tight and toe straps loose! Peter Barton eeked out a little extra speed to come through to win both races and the title. Chris took both 2nds for 2nd overall. Phil McCoy (Emsworth Slipper), having won Chi Race Week the week before knows the harbour well and took 3rd overall. Top Youth was Ben Charnley (River Ouse) in 4th on his first RS Aero event. Leading Master was Gareth Griffiths (Island Barn) in 6th.
The Club Championship (best 3 sailors) was won emphatically by Team Estonia as they are all from one club, Pirita Svertpaadiklubi! Last year’s winners, Lymington Town, took 2nd. Hayling Island, with their mass team of 15, finished 3rd. Simlilar emphatically brothers Whaley took the top Family prize (best 2) with a 1,2 in the big 75 boat RS Aero 7 fleet. The Batchelor’s from the Isle of Man took 2nd from the Cockerills in 3rd. Harken 'Midfleet speed-booster' McLube prizes of Hullkote hull polish and Sailkote lube went to Cathy Bartram (Chew), Charlie Pearce (Dabchicks) and Ffinlo Wright (Isle of Man).

Over the three day series it was great to experience a very full range of conditions of not only wind strength but sea state and course area also. Thanks to HISC for their wealth of expertise and resource. Thank you to event sponsors Magic Marine, Harken, RS Sailing and Selden Masts for their support, a great selection of prizes, vouchers, gifts and the ‘drinks for tallies’ initiative!

Next up....
Check out the UK Events Page for details on upcoming events including the UK River Champs on the Trent at Nottingham on the 17th September and the UK Inland Champs at Northampton on the 28/29th October. To extend your season with some late sun, join us at the Lake Garda RS Aerocup, 7-10th October!
You can also keep in touch with Everything Aero via the Facebook Group.
PHOTOS
Those above are by Steve Greenwood on Saturday and a full album is available HERE.
For downloads of those please contribute to the Andrew Simpson foundation HERE.
Peter Hickson is a Hayling Island SC member and also took a great number of wonderful photographs, available HERE.
'Contact moderator for downloads'
Also, photos from the increasingly boisterous Thursday, coaching and RS Aero Challenge Cup, by LW Media HERE.
Email Liam with the name/number of the photos you would like and how you would like them (digitally or printed) and he will give you a price.