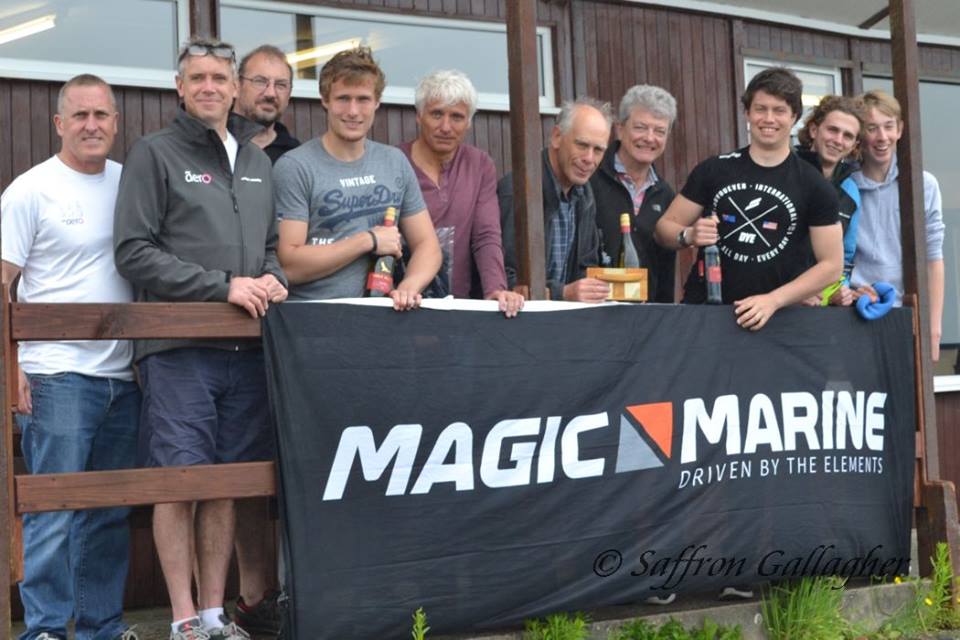 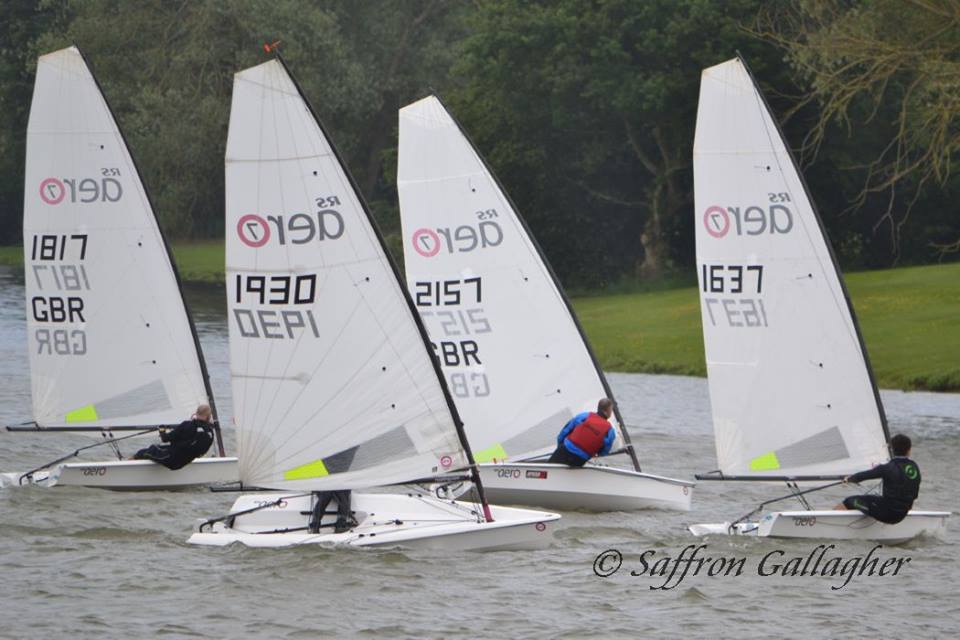 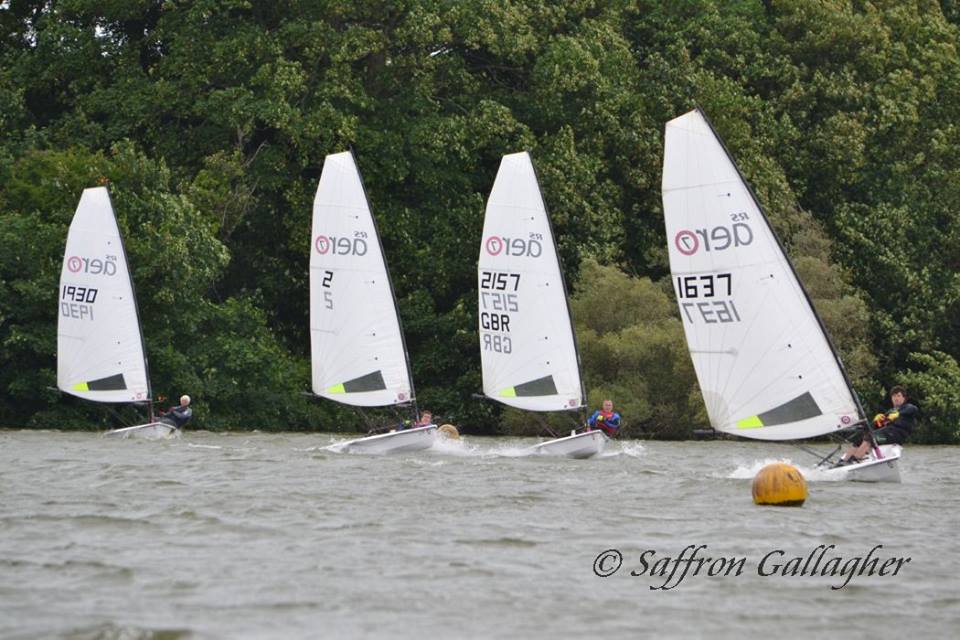 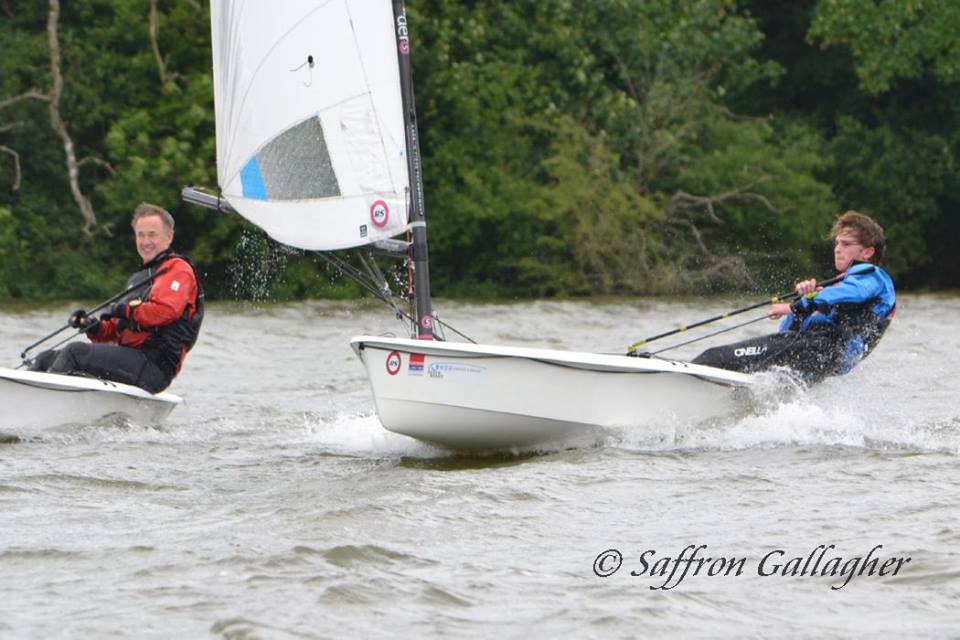 Race 1
The race committee did a good job of getting the first race away quickly and cleanly. A great but testing 15 knot breeze blowing straight down the lake kicked things off. The usual names were quickest out the blocks and Chris Jones in his 7 rig was making the most of the conditions and his local knowledge. After a rather packed windward mark, it was the turn of the 9 rigs to come through and extend with Greg Bartlett pulling through to 2nd on the run with Chris hot on his heels. Then the first big challenge… “did they say the leeward mark was to be left to port or starboard? Hmm.” Pete, clearly so focused on zooming away from the fleet started heading round the leeward mark the wrong way, but was saved from intervention by Chris; which was lucky as your race reporter also didn’t have the foggiest which way he was supposed to be going either! A close battle followed up the next beat with Pete and Greg tussling for first position. Greg’s additional pie eating and high mode vs. Pete’s low mode worked in Greg’s favour eeking out a lead. Just behind the two lead boats Ben Rolfe was on a charge through the fleet, passing the leading 7 rigs at the top mark. Paul Bartlett used his tactical nous to get right onto Chris’s tail at the 2nd windward mark. Another sketchy downwind followed with the sharp and sudden gusts hitting 20 knots plus at times. The positions remained the same at the leeward mark; Greg in front with Pete in very close pursuit followed by Ben and then the two leading 7 rigs of Chris and Paul who were having a great dog-fight! The third beat brought an increase in breeze with the wind consistently in the 20 knot zone together with some sharper and more severe gusts. For your intrepid reporter this was a little bit too much to handle in the 9 rig losing the lead to a worryingly quick Ben at the 3rd windward mark and Pete within a couple boat lengths. Down the 3rd run it was level pegging with Ben Rolfe, Pete Barton and Greg Bartlett all in a matter of metres of each other, however a sizeable gust of 25 knots plus got the better of Greg, digging his bow in - New Zealand America’s Cup style and resulting in a flying somersault! This led to a match race between Pete and Ben over the next lap. Just behind the battle continued in the 7 rigs, with Paul sneaking past Chris on the last tack of the race, to clinch 1st and 2nd results on handicap. Pete and Ben were next, with local sailor, Andrew Frost in the 5 rig, sailing excellently, to clinch the 5th position.

Race 2
After a fantastic chilli and jacket potato lunch from the hospitable Galley Team, the 2nd race resumed with Pete, Ben and Greg all moving down to the 7 rigs due to forecasted increasing winds. The excellent Race Committee had decided to spice things up a bit and added in a downwind slalom which involved 4 gybes to get round the course on the downwind leg. Again Pete Barton was super quick out of the gate, leading at the windward mark followed by Greg Bartlett. The breeze now well up into the 20 knot mark made for an interesting downwind leg. Whilst Pete extended his lead, boats started to bunch up downwind behind Greg, with Chris, Ben, Paul and Nigel Rolfe all hot on his tail. A well-timed 25 knot gust landed just as the main bunch arrived at the gybe mark. Chaos ensued with Chris, Paul and Nigel all having synchronised dips! This allowed Ben Rolfe to pull through to third. As the race progressed, Pete extended his lead from Greg, who followed suit from Ben, with the old boys of Nigel and Paul in 4th and 5th battling well, with Paul finishing ahead. The finishing result was Pete with a commanding lead, Greg in 2nd & Ben 3rd. Full credit to Andrew Frost who in his 5 rig was mixing it right up with the leading 7’s for much of the race and getting 6th on handicap.

Race 3
By now the wind was consistently in excess of 20 knots with the gusts approaching 30. To those who paid attention to the course board they would have noted a much shorter beat. However, a few numpties overlooked this - including your reporter! This led to a mass bunch up at the windward mark as the lead boats, which had overstood reached the mark at the same time as the boats behind. Again a downwind slalom ensued with very few capsizes or drama this time round as, almost everybody now had mastered their gybing and had a picture perfect memory of what the underside of their boat looks like. Pete Barton used his astonishing downwind pace and tactics to lead at the leeward mark followed closely by Ben Rolfe. Through laps 2 and 3 Pete extended his lead over Ben, whilst Greg used his ‘younger muscles’(?) to pull ahead of Paul Bartlett and a ‘puffing and panting’ Nigel Rolfe. On the last lap, boats began to bunch up as the wind slightly decreased and Pete tired with Ben then getting into a match race for 1st. A determined Paul was chasing down his much better looking son Greg, to avoid the dreaded ‘young pup bragging rights’ on the ride home. The finishing result was Pete Barton with an incredibly narrow victory over Ben Rolfe, with a couple place changes in the last 100m and Greg Bartlett in close pursuit.

The Overall results were 1st, Pete Barton followed by Paul Bartlett, Ben Rolfe and Greg Bartlett, all on 5 points a piece and finishing in that order 2nd 3rd and 4th respectively on count-back. Andrew Frost showing great speed was first 5 rig with Ben Poe 2nd.

A big thank you to the team Sutton Bingham Sailing Club for fantastic racing and hospitality, also to Chris Jones for organising a superb event and Saffron Gallagher for capturing the action through her camera lens

The next event on the Calendar is the RS Southern Champs at Hayling Island 17/18th June, with the next Open Meeting at the picturesque river venue of Bradford on Avon SC on the 1st July. I hope to see all you fellow RS Aero sailors there!
UK EVENTS PAGE