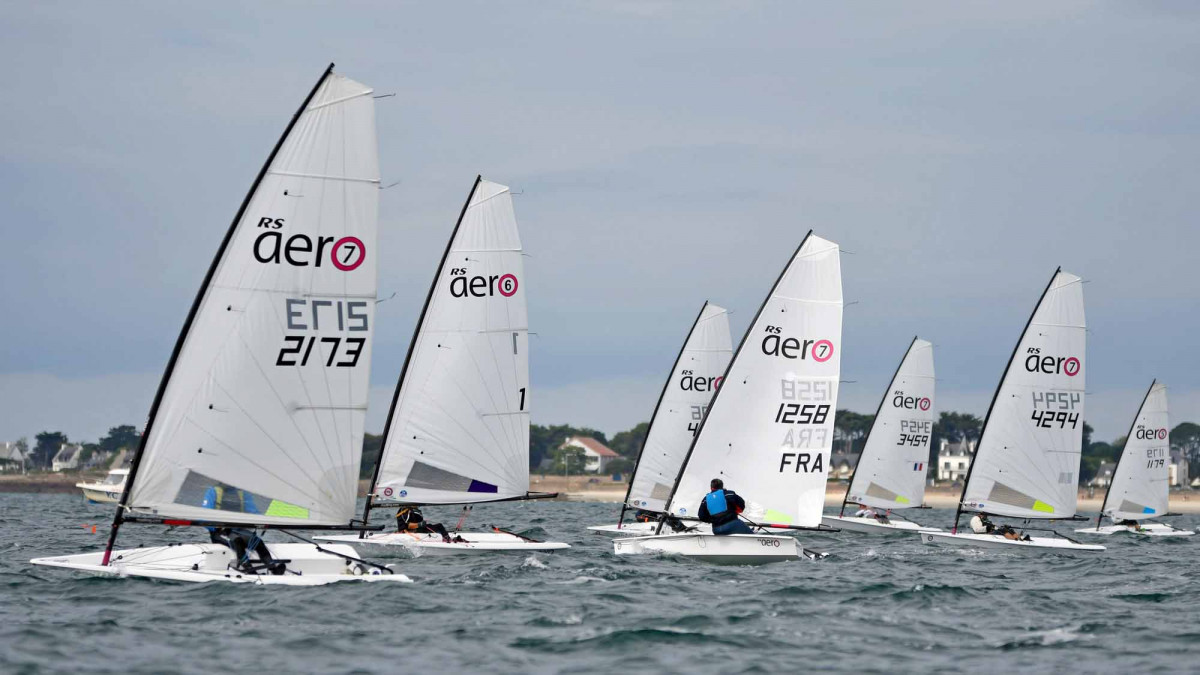 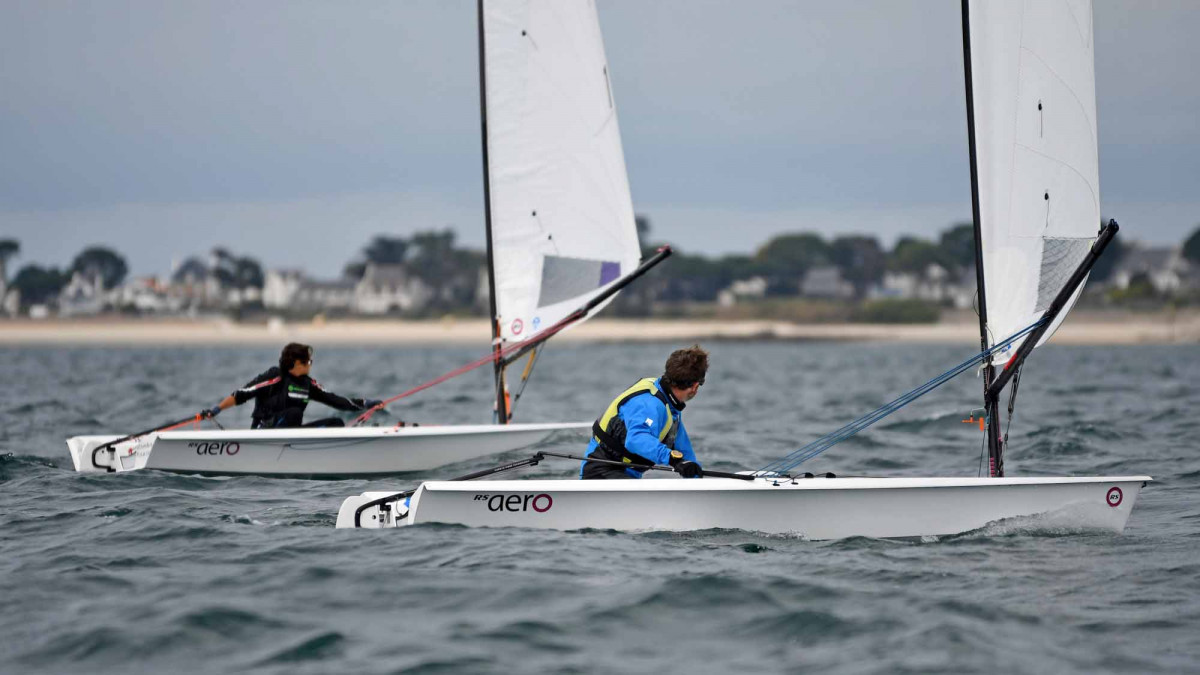 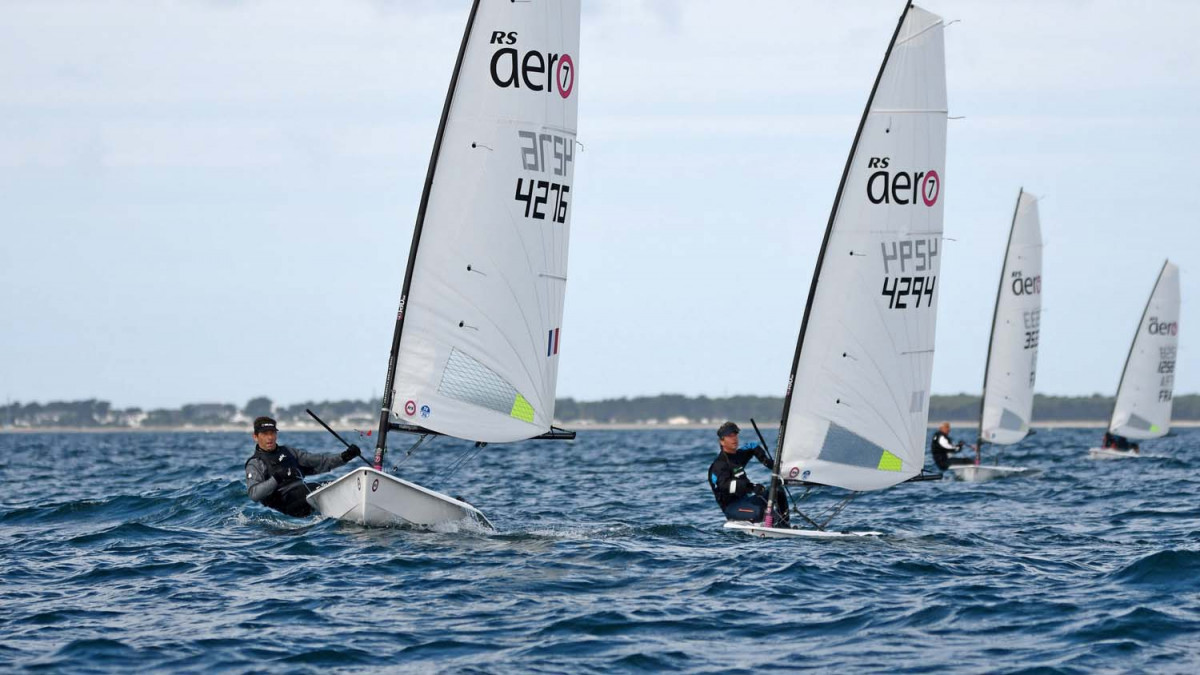 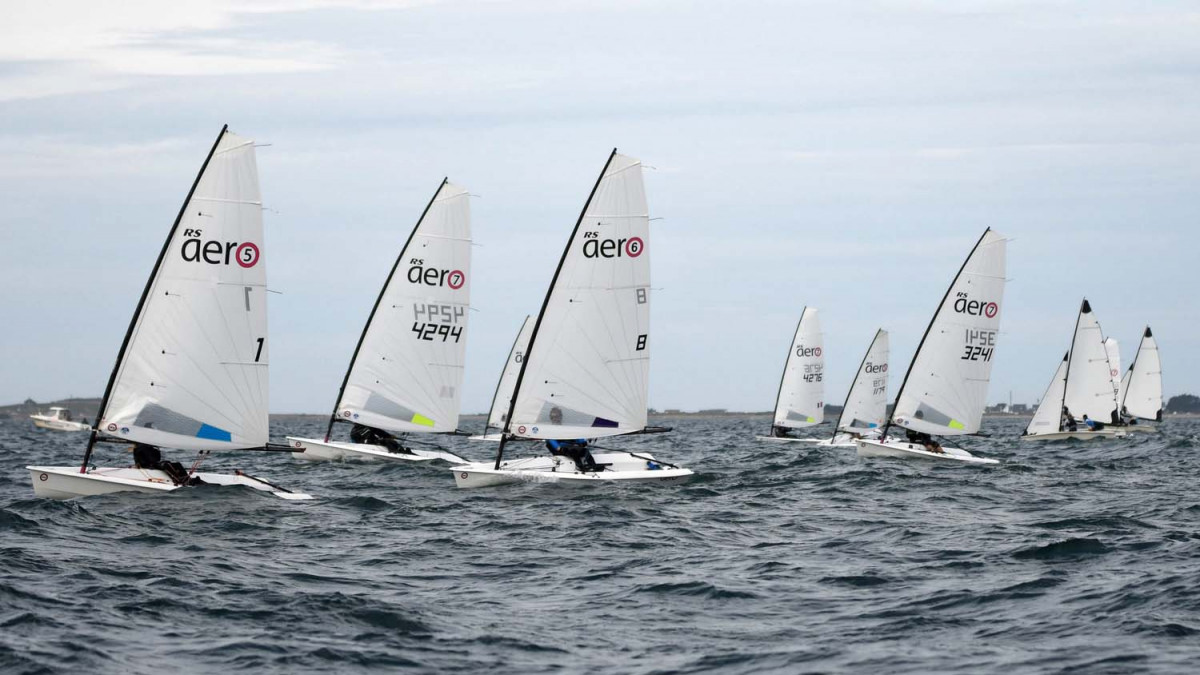 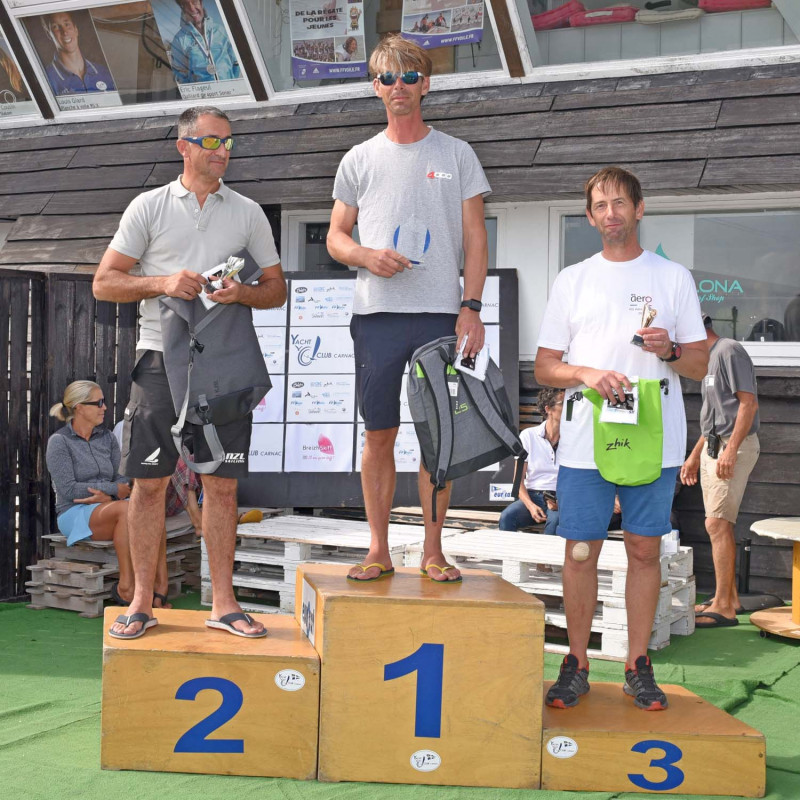 Thanks to Ludovic Roblin for his detailed debrief;
Here we are in the famous Quiberon Bay known as one of the best French spots for international regattas, in particular the Yacht Club of Carnac as an idyllic infrastructure and race area. A small corner of Breton paradise illuminated by sunshine and a slight breeze welcoming us for this mythical Breizhskiff regatta of which the RS Aero are the guests. Thirteen RS Aeros registered with always more and more new ones in the series!

On Friday we prepare our boats under the sun and the alert eye of Gilles Peeters from RS France who coaches us down, starting with an exchange about the feelings and difficulties of each one, while enjoying a hot dog in the comfort room Yacht Club. End of the playtime and we all head out on the water in a smiling and relaxed atmosphere. 2 hours of sailing we cover departures and placement online then maneuvers around a sailing route to work vigilance and observation.

The reluctant maneuvers at first become more and more fluid until fatigue tells us that it's time to go home for some and others choose to keep some strength for the next 2 days of regatta. We all tidy up and meet up for a friendly aperitif shared with the few skiffers already on site; a very nice moment of relaxation and laughter, where we also exchange more seriously about everyone's desires and we put thought to a first schedule for the 2023 season: lots of great projects will be proposed!!! stay tuned !

It's in the same atmosphere that most of us find ourselves in the evening in the "Maison du Bonheur" shared accommodation rented just a few steps from the club, for an impromptu barbecue meal, baked potatoes and salad... with a good rosé and a few beers. Here you find the Breizhskiff spirit that makes the Formula's historical success: exceptional racing venue, for regatta and sports, coaching, and very good moments of friendliness with a very nice group of enthusiasts. Thanks to Breizhskiff for welcoming us this way, along with the other fleets!

Sat 3rd moderate W wind 10/15kns with gusts, boats preparing, relaxed, friendly and caring, some showing apprehension as accustomed to iakes without waves, others are there for their first ever regatta in their RS Aero...The first start is launched and immediately 3 RS Aeros separate from the rest of the fleet; it's Ludo who throws the first turn then Arnaud, Benoit Radier temporary and sends further... this goes by fast . Florence who tries the new RS Aero 6, always precise and constant, doesn't give up and starts to gain again over the head trio: the DNA of Olympism is always present! Luc, Benoit Cailleux, Yves-Marie are in contact. Nolwenn and Emmanuel follow despite a rising wind that calls for thighs and abs. Antoine, our Parisian who starts his first course at sea, strong and determined, closes and finishes the first round.

Ludo will leave the first place to Benoit Radier, who played better without being fooled by the direction of the waves on the last run. The trio is tight and lets predict a fierce fight between them, because Arnaud does not give up and wins the 2nd round. Florence passes in ratings and sometimes actually ahead of the second Aeros 7 pack despite a remarkable presence of Luc in the wind supported by sticking the trio! Decisive, the Prefailles fleet is really in it, and Luc and Nolwenn are in it again. Already at Loctudy in a softer wind, Luc had rewarded us with a round of 2, just behind Nico!...

End of the first day, we are tidying our boats with a smile up to the ears - some would have preferred to go home, the wind and the clap had requested the organisms well. We are all dining at the Yacht Club with an excellent hearty meal and very well served - the hospitality of the YCC lives up to its reputation - we are really enjoying it!... Wine and fatigue catapult us directly into our beds without an excessive night...

For the 2nd day Sunday, winds forced at 13/17kns south. Longer waves and sporty day expected...
Some are not reassured about this wind picking up but oddly enough, before the first start, it finally lets down!... , while a few had changed rigging and went from 7 to 6m2... Too bad for Manu in the first round but still it was a good experience to confirm that with his 66kg the compromise is much better when the wind picks up.

The first departure starts at 10:30am with a route as simple as yesterday but a little shorter. The excellent committee was able to adapt to the fleet and shorten the route that had caused some to suffer for more than 45 minutes the previous day. The swell is more consistent than the wind and complexes the edge up close. Ludo, enraged to have upset Saturday with his explosiveness, presents a more relaxed posture by winning the first and second rounds.

Into the third round we see Florence and Nolwenn get to a short-line start with an impressive close-to-head start! Benoît Radier, always regular, wins this beautiful 3rd round. The last round was won by Benoît playing skillfully from the mistakes of others and demonstrating his constancy.

Thus we end this wonderful regatta by congratulating the committee that made a flawless one, and we sincerely thank the Yacht Club Carnac for the welcome. Thanks to all the Breizhskiff runners for opening the doors to these great rallies.
And what a pleasure to find this group of Aeros, some of whom push us up with their excellent level, and all of them with their exemplary, kindness, simplicity, gentleness and humor, definitely make us want to find them again.

Can't wait for the next Regatta! And it will be La Berre Y Skiff in the South Zone! See you very soon!
Ludovic Le Roblin
PS/ A few additional comments:
1- Thank you, thank you and thank you Breizhskiff for allowing us to join such events! The inter-series is the real solution to continue developing the practice. Let's play together, beyond classes and exclusions, and inspired by the English practice that blends with bliss this inter-series, solid regatta and an exemplary social...
2- Thanks to Gilles Peeters who ensured a top coaching session on Friday - essential coaching to give confidence to those who join us (Pascal, Antoine, ... ) and allow others to progress further. When you see the perfs of some, you see that it bears fruit: isn't it the Prefailles team? Is this not ludo the Italian?
3- We were able to outline the 2023 calendar together, with the possibility of still joining Breizhskiff! We'll start with Lake du Der on Easter, then Teignouse, the National at the end of June, then definitely Carnac again... We also make room for international rallies, including the World Cup in Sardinia at the end of July, and other rallies in the Netherlands (Bruinisia,.. ) and in the UK. We have all been advocating for the possibility of associating coaching with each event and planned to try new, more playful and boat-friendly types of routes for the national. Stay tuned!...
4- The RS Aero France group no longer exists only on the online networks, but in a very practical way, with a team and fleets that really enjoy being together. It's because of these local fleets and the pleasure of being together that we want to make you want. Something is happening in Brittany-Morbihan-Nouvelle Aquitaine, same in the north in Wimereux where a group is formed. New RS Aeros will be on the market end of October, so test the boat and join us!
5- A few missed this time: our Jon Mills due to triathlon, Olivier Dewez, Anthony Thepot or Serge Motet who could not make themselves available. Very happy to finally meet Antoine and Pascal. Marc and Claire from the group of Prefailles were missing, even though Luc, Nolwenn and Yves-Marie represented the fleet well. Nice to have Emmanuel back again, and Erwan came to visit. There are still some premises to uncover and bring on the Morbihan, and we are not desperate to get the Loctudy team moving, which would still help to challenge the leaders.
6- A observation shared by many participants: the RS Aero 6 is of real interest, especially in these mixed fleets; it gives a wider range of sailing, and fits perfectly to people under 70kg or those that would like a less physivcal experience. Florence and Annie paved the way. Looks like several of us need to step up for next season. To be continued....