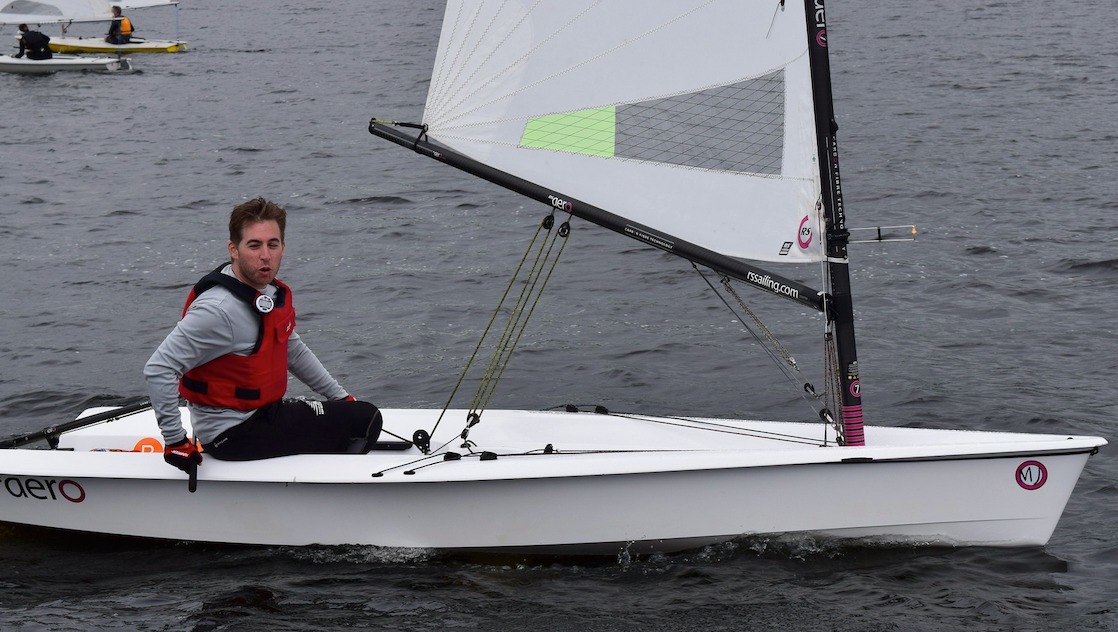 Thanks to Derek Stow for his report;

A small but enthusiastic group of six RS Aero sailors gathered at Massapoag YC on Saturday May 28 to contest the MYC Small Boat Regatta - the longest running one day RS Aero regatta in the western hemisphere.

The winds were a solid 10mph out of the SSW with just enough gusts and lulls and lifts and headers to keep life interesting, and the direction enabled the race committee to set a trapezoid course with beats up the long axis of the lake. It really doesn’t get any better on this lake.

As the weather forecast called for thunderstorms and hail (yes hail in May!) to cross the region in the afternoon, PRO Greg Kampf decided to change the usual format for this regatta of a couple of hours racing in the morning, followed by lunch on land and some more racing in the afternoon. We would sail right through until we ran out of time, our legs dropped off, or the thunderstorms blew us off the lake.

All six sailors chose to use their RS Aero 7 rigs to make it a pure one design regatta. No blaming it on your handicap rating today. As a result, racing at the front of the fleet was close and fierce. Two local fleet members John Eckart and Eric Aker battled with visitors Sally Sharp from Mascoma SC in New Hampshire and Phil Myerson from Cedar Point YC in Connecticut for the top three places.

Eric and Phil sailed consistently scoring top three finishes in all six races, with Phil taking a flyer and winning the last race to secure the overall win. Sally and John ended up in a tie breaker for third place with Sally edging John out by having had more second place finishes than him. Bringing up the rear in most races were the old man of the fleet, Derek Stow, and relatively new RS Aero sailor Jeff Curtis.

Jeff’s previous sport was hang-gliding. Last year he decided to take up dinghy racing instead. He did his research and decided the RS Aero would be the best boat (of course), and he joined us for some races at Massapoag YC last year and frostbiting in the fall at Bristol YC.

In race 5, Derek and Jeff had an unfortunate collision near the club. Derek decided to sail into the club to inspect his boat for possible damage (and he was getting tired anyway). Jeff decided to retire too, which left Derek in 5th place and qualified him for a trophy in this event for the first time in many years. Callooh! Callay!" he chortled in his joy. (His boat only had a minor scuff.)
But wait. Who was sailing that RS Aero in the southern end of the lake while we were all racing? That was new MYC RS Aero fleet member Rob Steen. Rob had picked up an ex-charter boat from Zim Sailing on the day before the regatta, and he decided to do some solo practice in the boat before trying out his hand at racing. Expect to see Rob in RS Aero 4070 in the Sunday races at MYC this year.

Thanks to the visiting sailors for coming, and a big thank you to Diane and Greg Kampf and all the volunteers on land and water who did a superb job.

We didn’t see any thunderstorms. Apparently they hit the club after we all had left. And as we didn’t go in for lunch there was A LOT of food for us all after racing.
It was a very good day. Come join us next year!