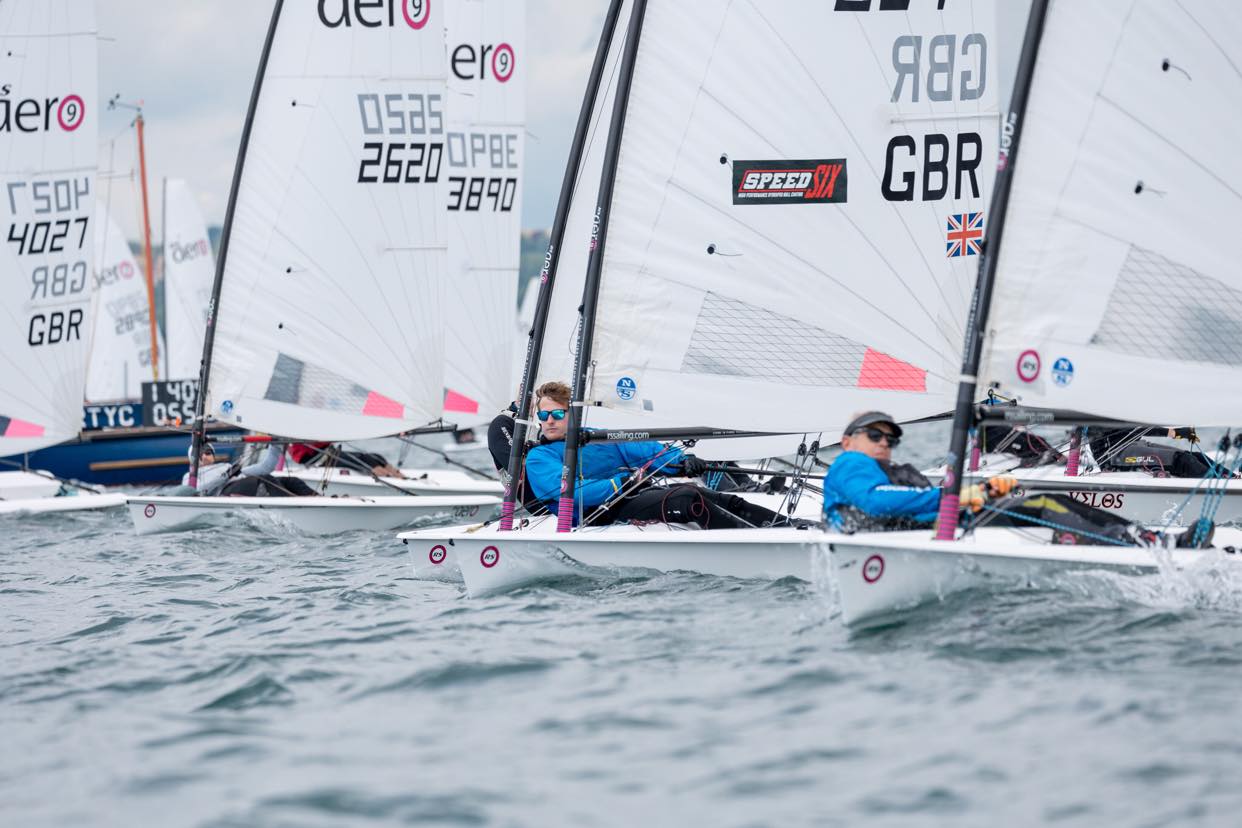 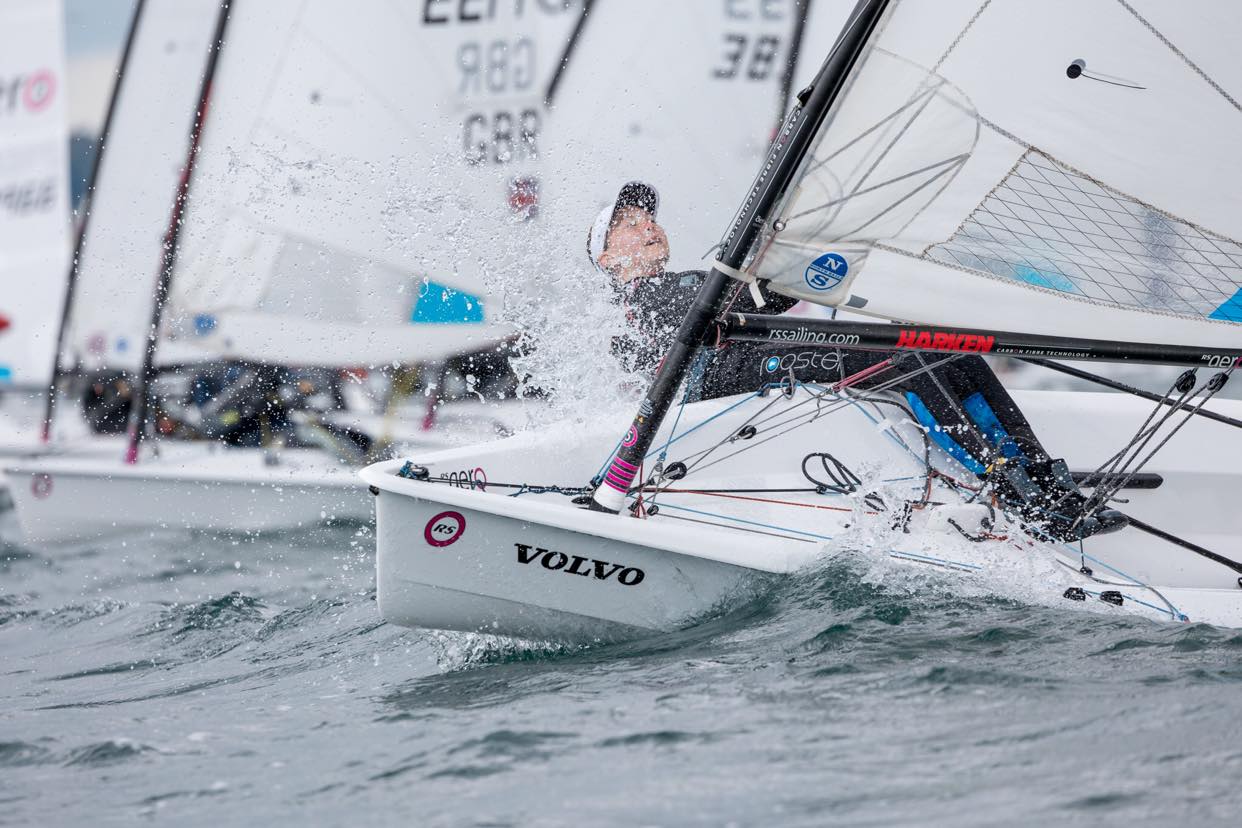 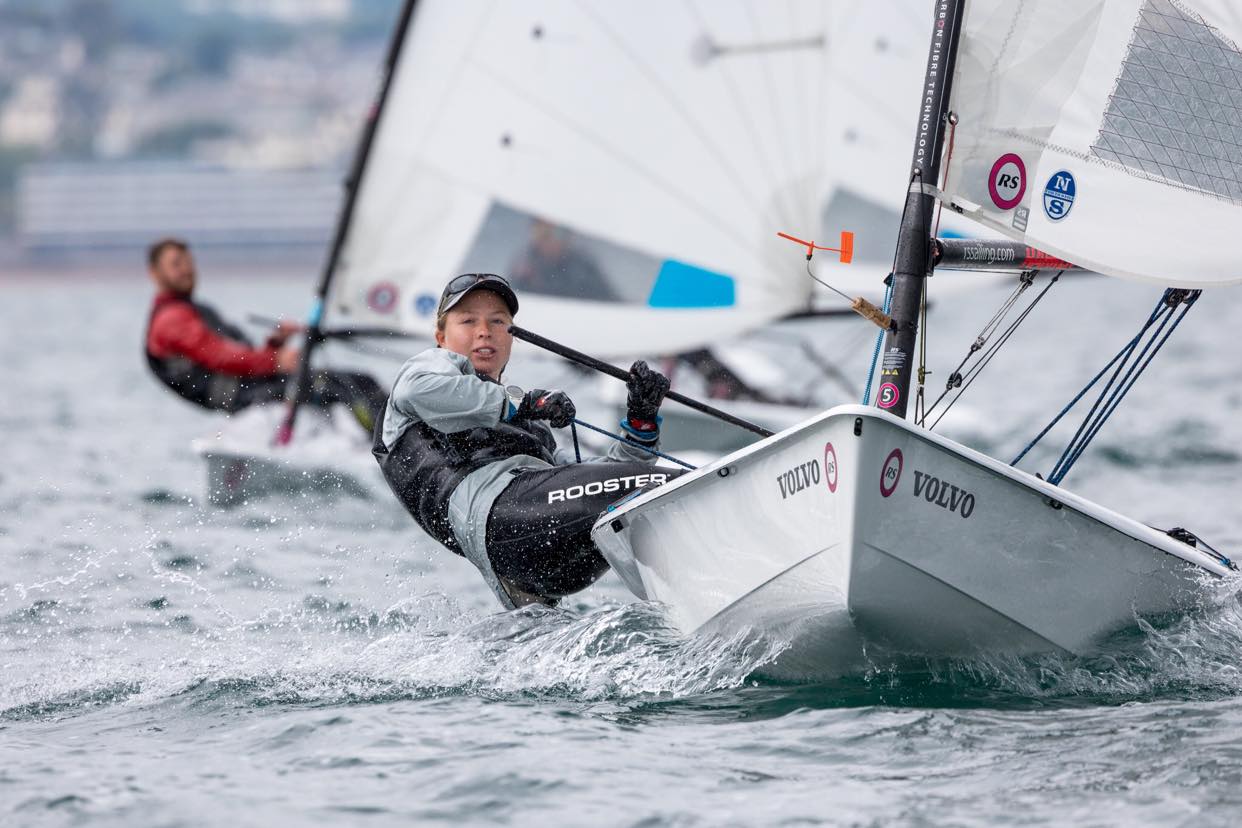 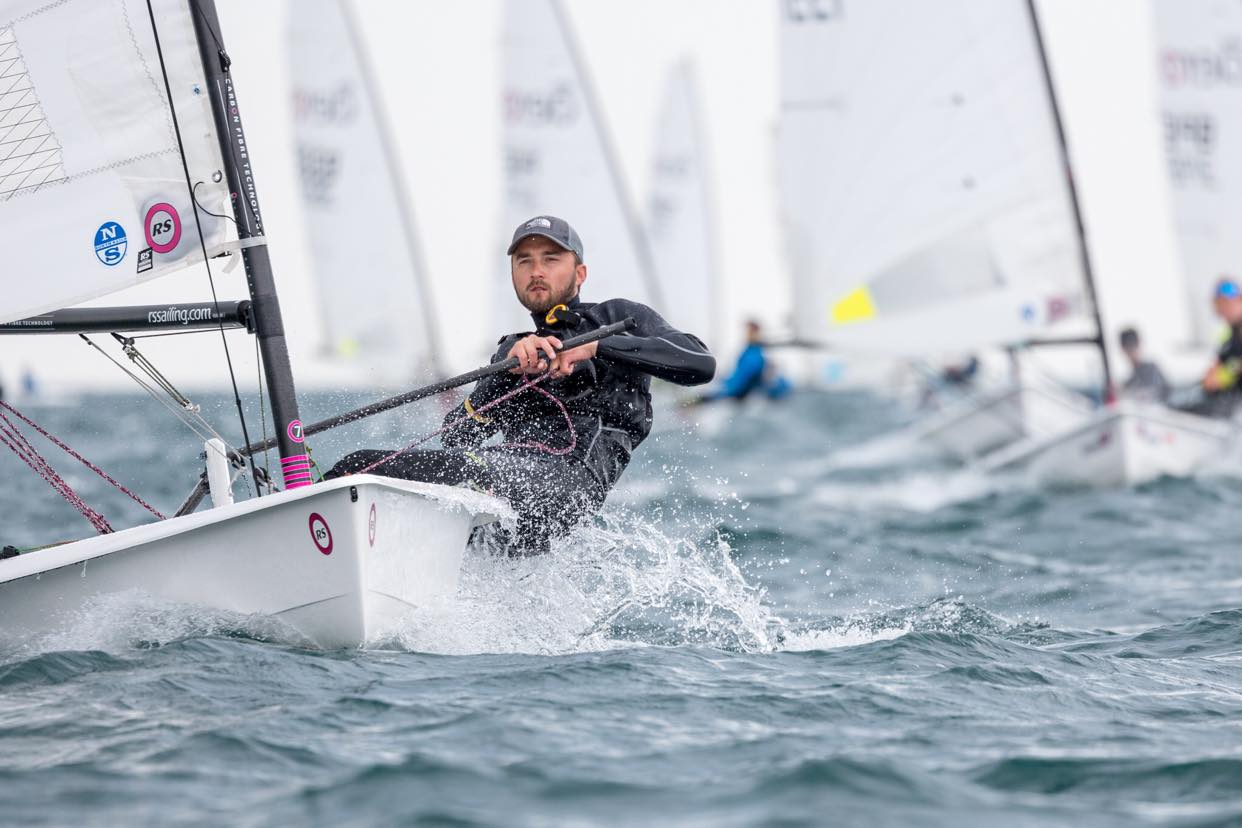 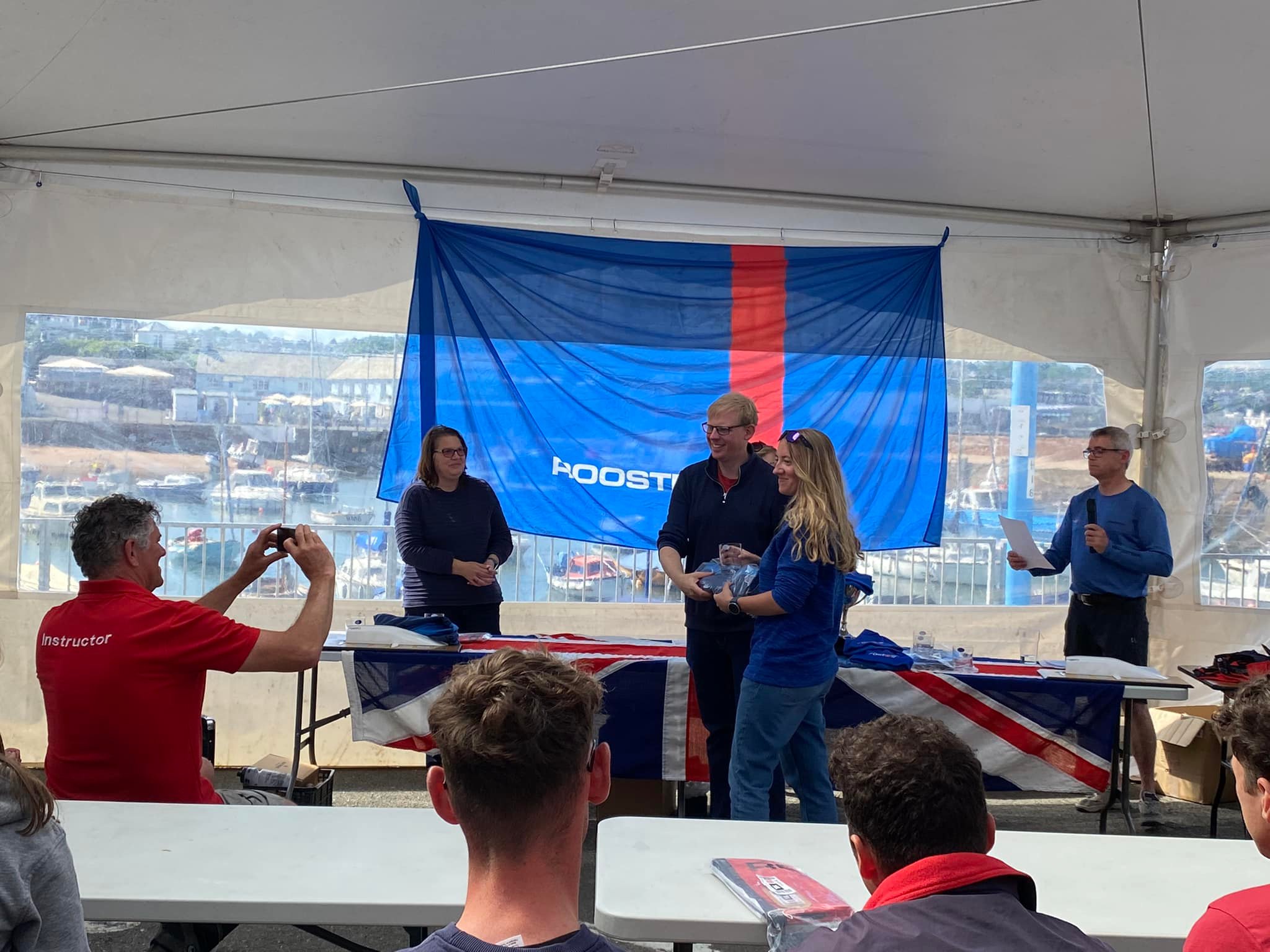 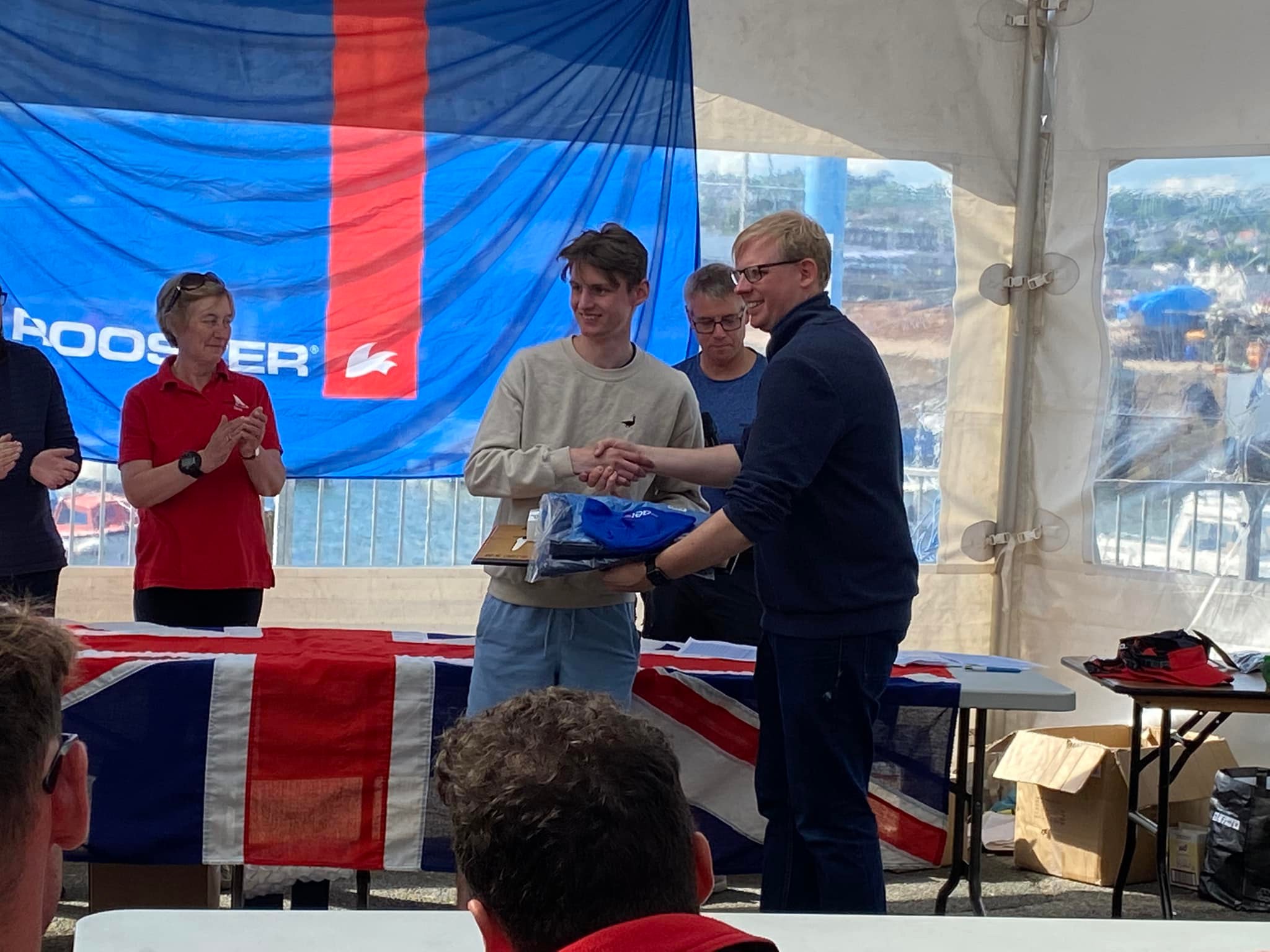 
On Day 4 of the 2022 RS Aero UK Nationals at Paignton the stage was set for a nail biting climax to the end of the championship with points still close in each of the four fleets and all to play for. After Paella night in the marquee at the Club those still with energy hit Torquay’s late night scene and a few of the revellers were looking somewhat Frosty as they arrived at the dinghy park in the morning!

The light and changeable wind proved testing though and just one shortened race for the RS Aero 9s and non for the other RS Aero Classes were possible. Once again James Ripley’s race team made every effort achieve good racing and again the heroes were the mark layers moving the marks back and forth to be ready to seize an opportunity. Overall in the Championship the race team’s endeavours were rewarded with 9 or 10 good races for each fleet with a good variety in both wind strength and wave type to provide something for everyone.

The only change to the Day 3 results was Chris Larr (Draycote) stepping up to 2nd overall with his 3rd place in the final RS Aero 9 race. Steve Norbury (Warsash) took 3rd overall with Peter Barton (Lymington Town) retaining his lead for the title. It was however all a lot closer than the results look with Steve loosing 7 places and Peter gaining 7 places on the final beat as the wind faded, which otherwise could have led to a final race decider!

The RS Aero 7s were the largest Class with 53 boats and it was great to see many new RS Aero sailors at the front of the fleet. Jack Lewis (RYA) took the title with a steady series. Just two points behind was Jack Miller (Felpham SC/Paignton). Rupert Stock (Royal Lymington) and Dominic Hall (Hayling) were just a few points back in 3rd and 4th. Ireland’s Paul McMahon (Howth) came to form towards the end of the series with two wins to step up to 5th overall. 1st Youth (U19) was William Homewood (Lymington Town), 1st Master (O55) Chris Jones (Sutton Bingham) and 1st Grand Master (O65) Michael Baldwin (Leigh & Lowton).

In the RS Aero 5s a solid finish with 3,4,2,2 on to Day 3 saw Jonathan Bailey (Hunts) clinch the lead and the title by just two points from Chloe George (Lymington Town). Two 1sts on Day 3 gave Tom Ahlheid (Frensham Pond) jump to 3rd and top Youth (U19) just edging our Axel Almersson (Vasteras) of Sweden into 4th on a tie break. Rounding out the top five and with an impressive win in Race 5 was Yana Skvortsova (Island Barn). First Junior (U16) was Aimi Cole (GWV Vrijbuiter) of the Netherlands in 18th.

The Club Challenge is the top three sailors for each club and saw Lymington Town SC defend their title again and the strong team from Paignton SC taking 2nd. The Family Challenge needs two family members and last years runners up Dominic and James Hall stepped up to take the win from the Bailey family in 2nd.

Many thanks to Rooster, Noble Marine and RS Sailing for their support of the RS Aero UK National Championship which has allowed sociable daily awards spread through the fleet. The presence of our Class Juror David Battye and his instructive briefings and debriefings help sailors understand where the line of the rules are drawn, promoting fairer and hence more enjoyable racing for all. Phil Jackson of Digital Sailing was on the water to catch the action with and awesome gallery of photos, check them out at; www.digitalsailing.co.uk

Thanks to everyone at Paignton Sailing Club for a fantastic championship. Their large team of volunteers showed both passion and expertise to deliver an awesome championship and the Class looks forward to returning.

Event Shirts
Thanks to Rooster for their support with RS Aero UK Nationals Custom Kit. Order your RS Aero UK Nationals kit online as a cherished memento. Cool UVF T-s and the super smart white Tech Polos with the event logo added are available to order from Rooster HERE - remember to use your 10% Class member's discount code.

Next up for the UK RS Aeros is the Southern Championship at Felpham on 11/12th June before the UK team leaves for the 4th RS Aero World Championship at the Columbia Gorge in Oregon, USA, later this month.
RS Aero Events List