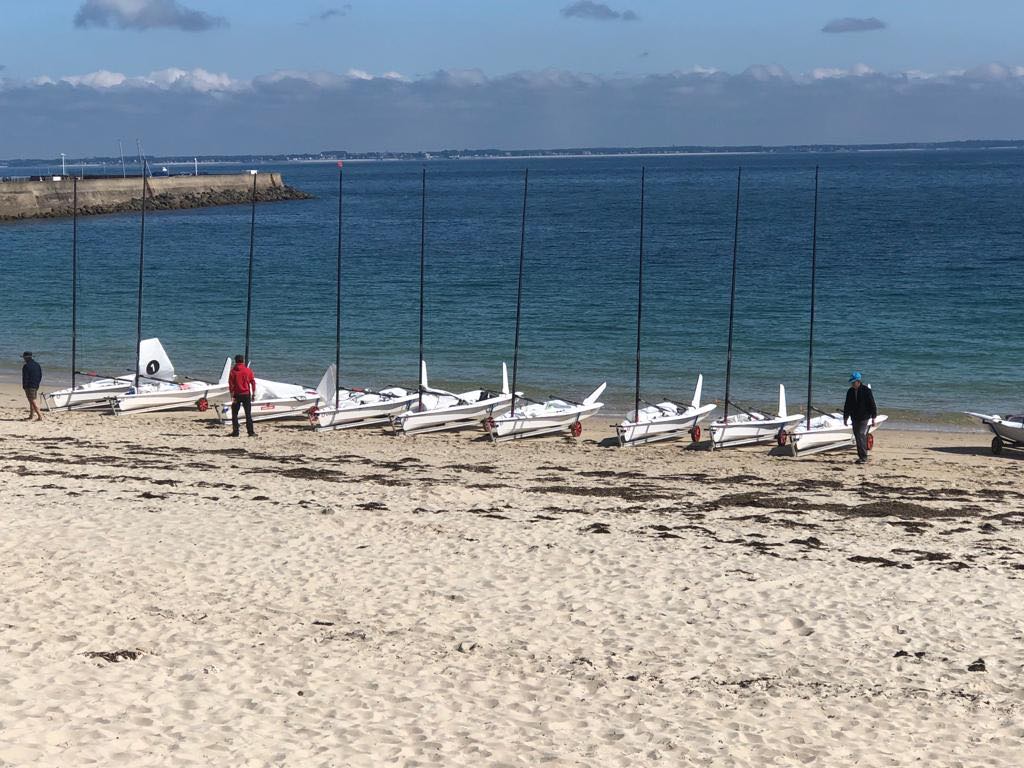 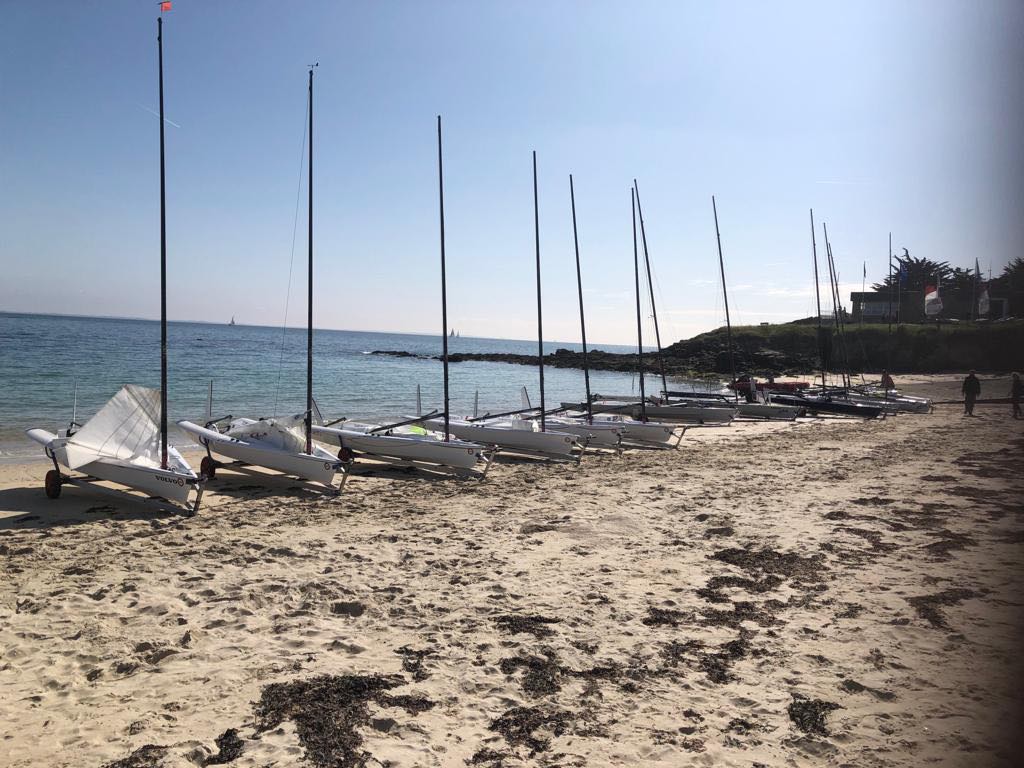 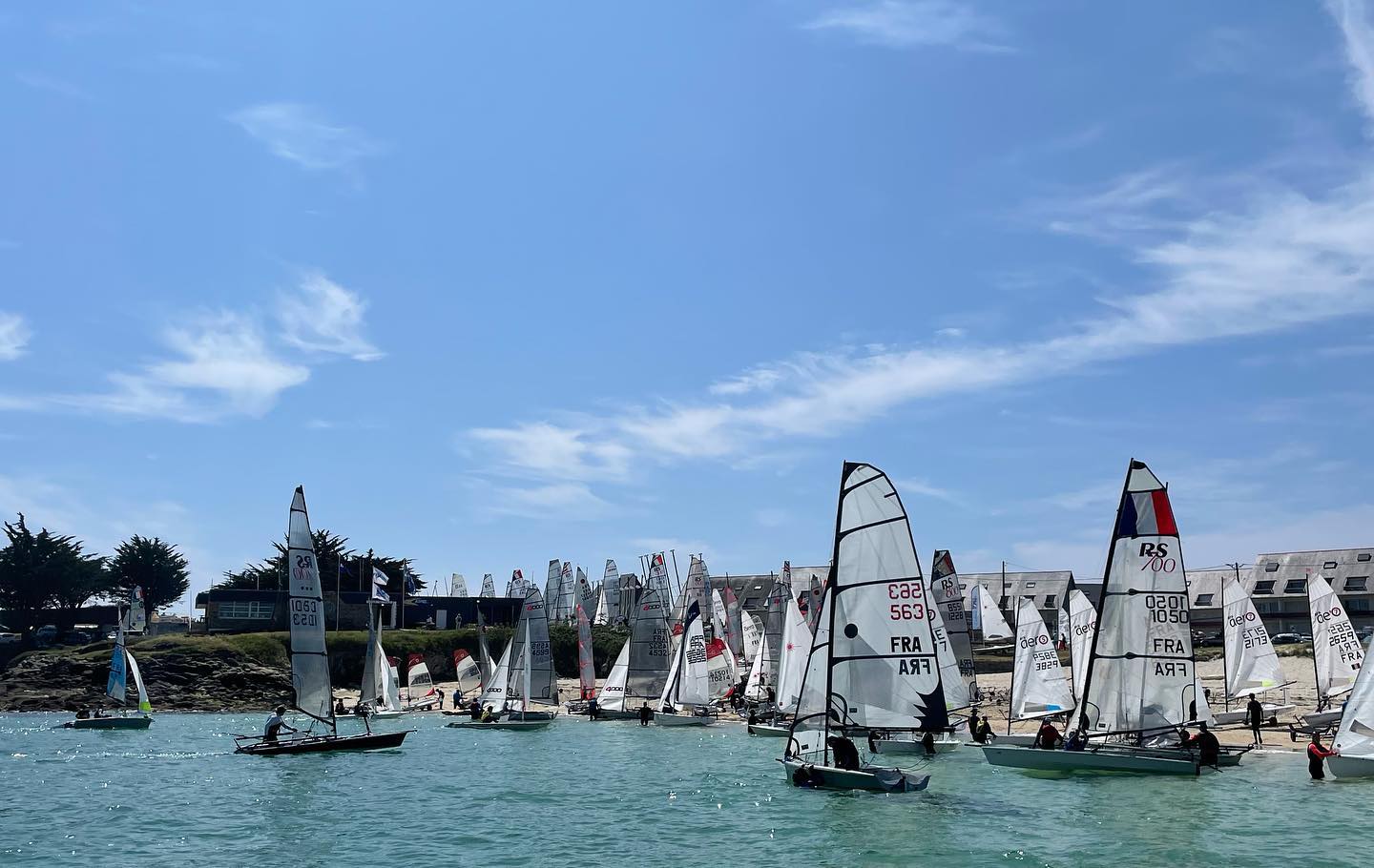 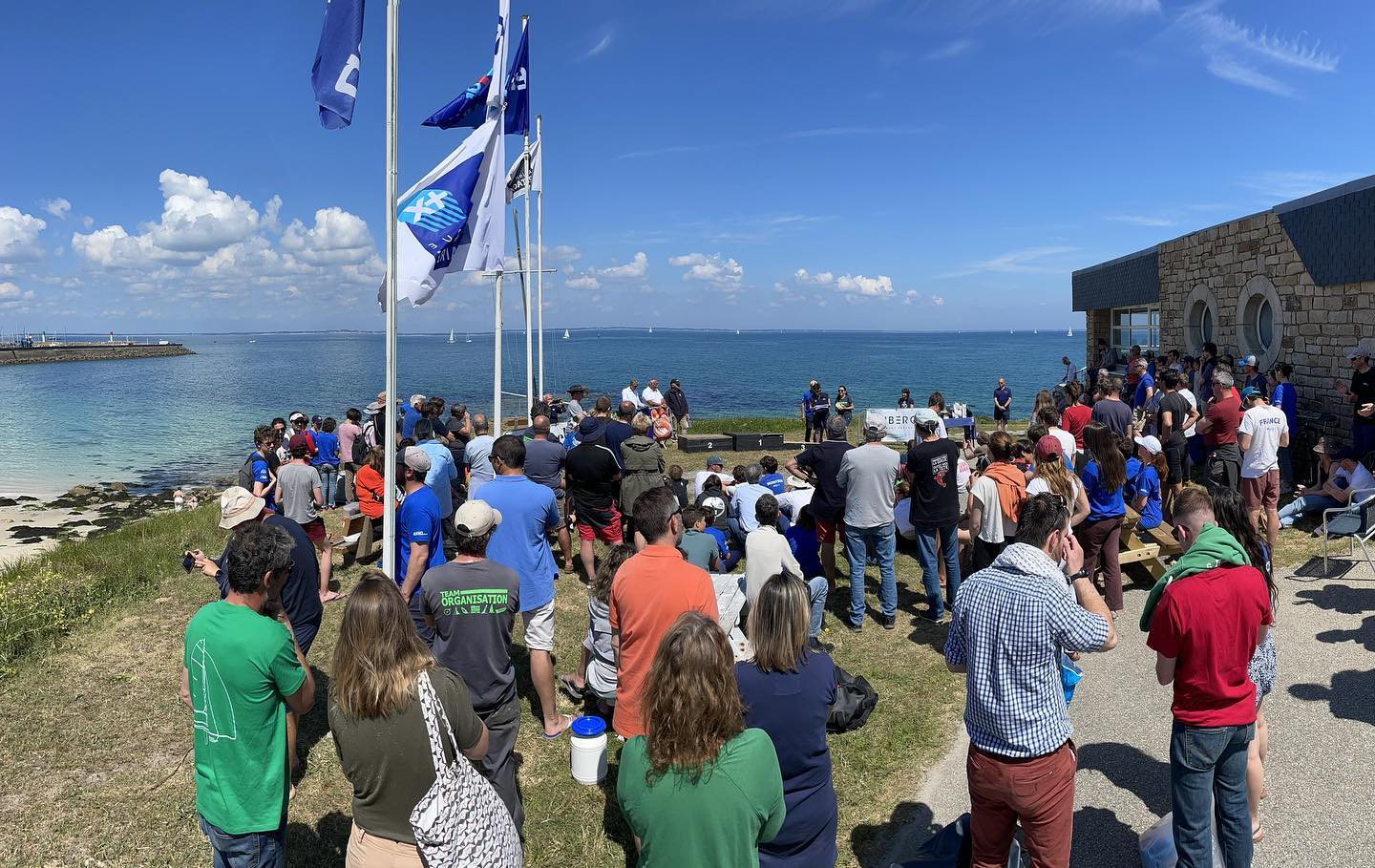 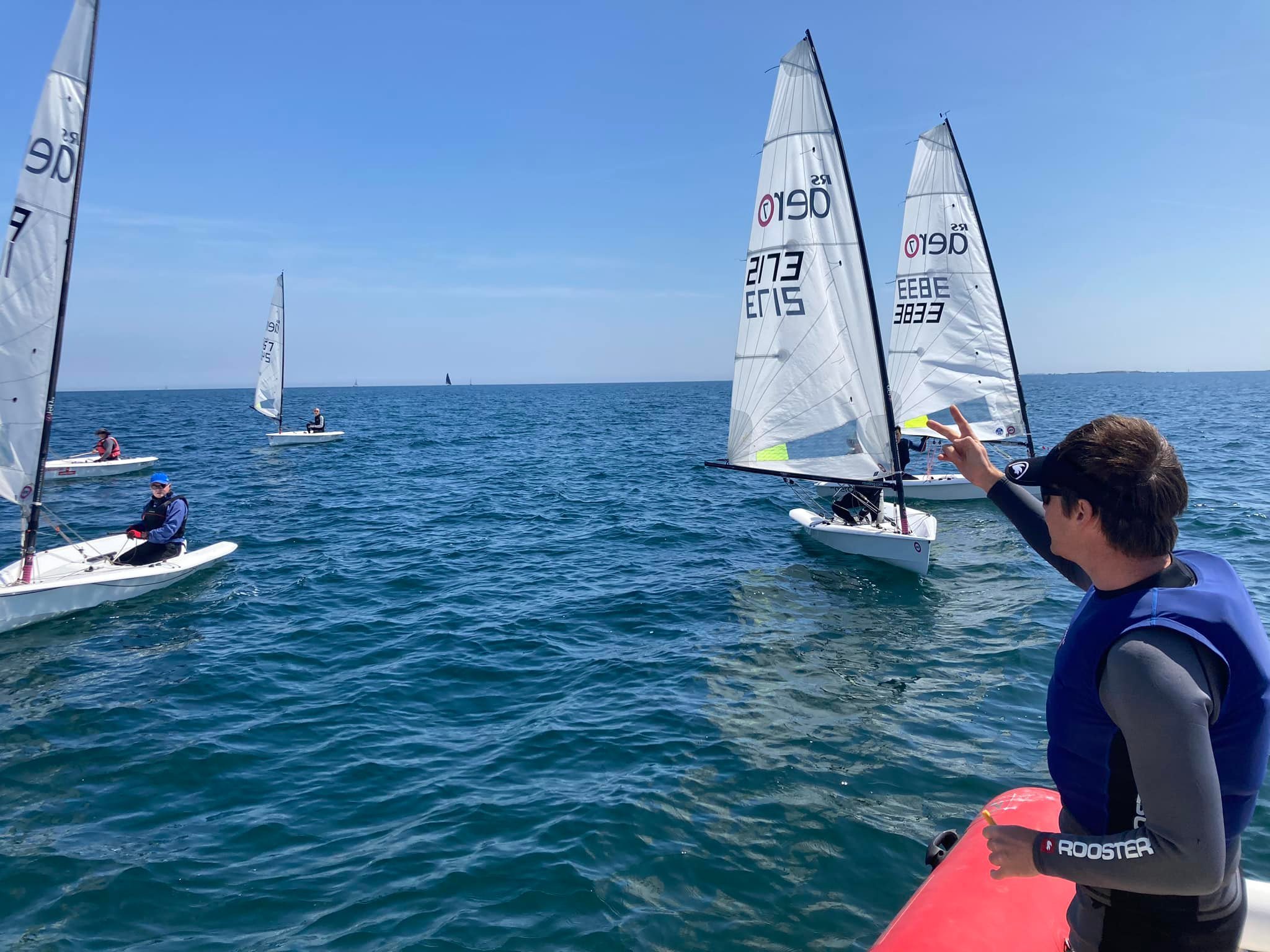 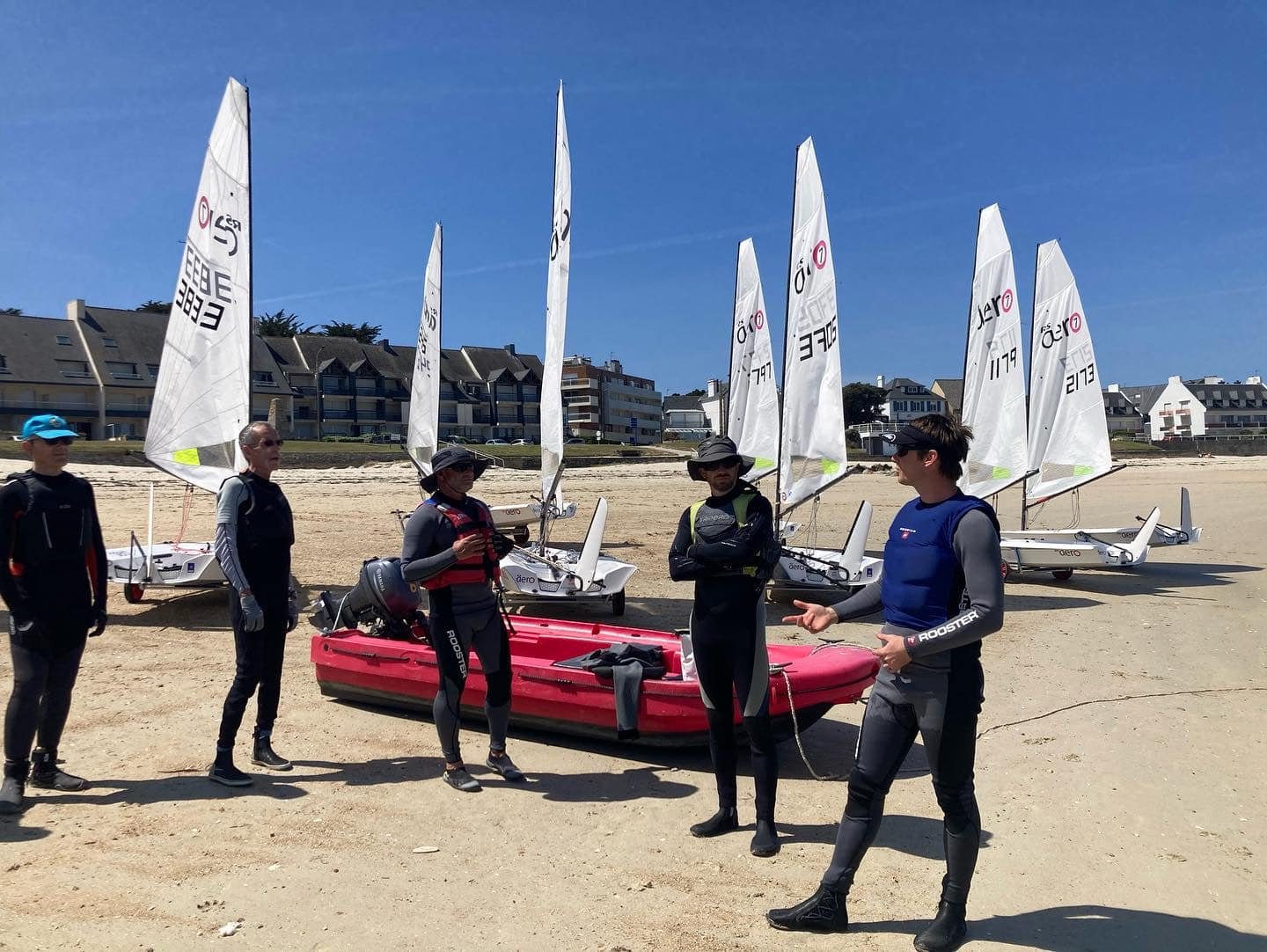 Thanks to Arnaud Bouchez and Jon Mills for their report;


After a two year absence the popular Teignouse Cup made a welcome return to the Quiberon peninsula, Brittany for the weekend of the 7/8th May. With a fleet of 16 boats RS Aeros were the largest adult class present with entrants travelling from across France to enjoy the 120 boat regatta, beautiful sunshine, a fantastic sailing venue and an excellent host club.


RS Sailing France had offered the owners a coaching session on the Friday before the regatta. It was an important meeting because for the first time since the establishment of a national RS Aero France group at the beginning of the year, all the leaders of the regional fleets were present, happy to get to know each other, share the projects and a few beers. The common goal: having fun together with the RS Aero, developing a calendar and events based on existing local fleet that allow everyone to progress and have fun, expand the opportunity market by facilitating renewal of boats from those who sail a lot, and share our passion with the highest number.

It was great to meet new owners, very varied experiences and levels, and we all shared an obvious pleasure to enjoy the event!
On Friday, 10 RS Aeros were on the water for the special RS Aero coaching session with Nicolas Honor, Olivia Maincent and Gilles Peeters of RS Sailing France. After a shared picnic, we were on the water doing some duels, experimenting & tuning in a fresh wind. This very informative session ended in 15 knots and we were happy to return to find the BBQ organized by the ASNQ.

On Saturday the first race was due to start at 12:00 but the PRO held the competitors ashore to wait for the sea breeze to appear, which it duly did by mid afternoon. The fleet were a bit over keen to get away for the first race with the black flag appearing after two general recalls. With the wind coming over the headland, it paid to watch carefully for shifts and patches of stronger breeze. Ludovic Roblin showed impressive boatspeed to take the win followed by Arnaud Bouchez in his new RS Aero and Benoit Radier overtaking Jon Mills on the last downwind leg to take third.

The sea breeze continued to build for race two which saw Roblin taking another win, Radier second and Bouchez third. The wind was starting to get more interesting for race 3, hiking legs were getting tested and the front of the fleet were much closer ending with the same top three but in a different order with Bouchez coming out on top, Radier second and Roblin third. By now the evening was drawing in and the fourth race was started at 18:30 but shortened. Ludovic Roblin, Benoit Radier and Jon Mills arrived at the windward mark almost simultaneously. Unfortunately Roblin and Radier hadn’t potted the shortened course flag and set off downwind leaving Jon Mills to sail the reach of the trapezoid in first place which he held to the finish. Olivier Gandon took second with Luc Body in third.

The fleet were then sent home for Oysters and Paella provided by the hospitable ASN Quiberon.

Sunday saw a chilly northerly wind blowing onshore but forecasted to reduce as the morning went on. The PRO wanted to get at least two races completed, hence after a general recall for the first start kept the U flag up for all subsequent starts. Sadly, Roblin was caught out twice and despite showing impressive boatspeed scored two UFD’s. With waves left over from the dying breeze maintaining speed through them became the priority and in the first race of the day Radier claimed the win to put him in a strong position for the series, followed by Mills in second and Gandon third. The final race was shortened due to the dying breeze and with the front six RS Aeros close together, Olivier Gandon decided a broad reach was better than a slow run, subsequently pulling out 200m on everyone else to take the win. Radier was second to wrap up the series with Bouchez third.

With Ludovic Roblin having to count a UFD he was regretfully not in the top three despite having been the fastest RS Aero over the two days. Consequently the finishing order was:

Next year the Teignouse Cup will be back to its usual three day format and it would be fabulous to see this event grow for the RS Aeros. The club was welcoming, the sailing well organised and the setting fantastic! Thanks to ASN Quiberon for a great weekend and to RS Sailing France for the Friday coaching.

Next for the French RS Aeros are visits to Lac du Monteynard and Wimereux in June followed by the French Championships at Loctudy, Bretegne, on 23/24th July.
RS Aero Mainland Europe Events List