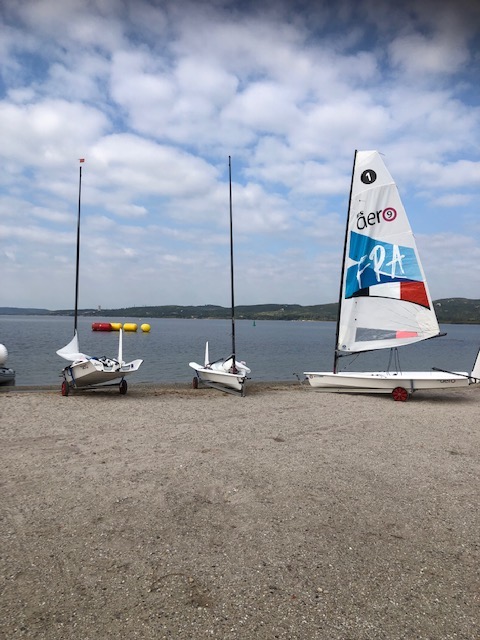 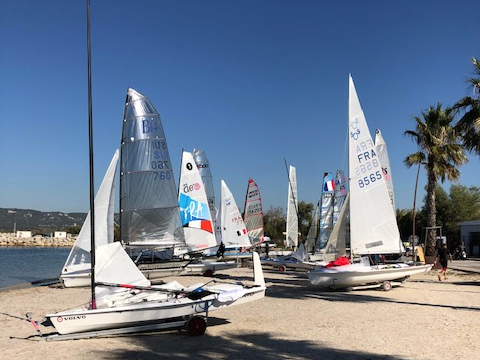 Breizhskiff - CN Berrois, l’Etang de Berre, Marseille, France, 16/17 Oct
Congratuations to our 'Man about the Alps', Jon Mills, on taking the overall win before the fleet was split and Thanks to him for his report;

25 mixed class boats assembled for the fifth round of the French based Breizhskiff series at the Club Nautique Berrois on l’Etang de Berre near Marseille and for the first time in the series this included five RS Aeros. Breizhskiff is a popular series of six two day events for skiff type dinghies with five events held around France and one in Switzerland. However the organisers have also opened their arms to other modern dinghies hence RS Aeros are welcome to join in so amongst the 49er FX’s, RS 800’s, 700’s, Musto Skiffs and others were four RS Aero 9s and one RS Aero 5.

In an inspired move, the club had taken pizza orders from all those travelling down on the Friday enabling everyone to assemble in the welcoming clubhouse for pre race chatting and refreshment. The forecast was for light winds for the whole week end.

Saturday morning proved to be exactly as predicted with the wind lightening during the course of the morning so that by the time of the first scheduled start at 13:00 winds were on the light side of light. This provided an advantage to the RS Aero sailors as the faster trapeze boats were unable to pull away from the lightweight Aeros with RS Aero 9 sailor Jon Mills being 4th boat across the line to take the win on corrected time. Race two saw slightly more breeze initially only for it to die again, the Race Officer shortened course with Jon Mills again being the first RS Aero taking 2nd on corrected time.

The club provided home made lasagne and local wine for all competitors in the evening and couldn’t have tried harder to make everyone welcome. In view of the forecasted light winds the race officer brought forward the scheduled start time for the following day to try and take advantage of the predicted morning breeze.

The first race on Sunday turned everything upside down with a 7-8 knot breeze enabling the faster boats to initially stretch their legs and with slightly more pressure on the left of the first upwind leg different boats were at the front of the fleet. However just after the first two 49er FX’s crossed the line the wind died away to virtually nothing leaving everyone else to eventually ghost to the finish. The Race Officer then decided to send everyone back to the beach for lunch.

The fleet launched again at 2pm into a gentle 5 knot breeze and got away cleanly for race 4, but again the wind died slowly. One 49er managed to keep enough pressure in the spinnaker to cross the line before the wind died to almost nothing whilst behind them the RS Aeros again managed to keep pace with the rest of the fleet with Jon Mills being 3rd across the line to take second overall. With mirror like sea conditions the Race Officer sensibly then called it a day and with a discard coming into play Jon Mills won overall on corrected time scoring 1,2,2.

In order to be fair to those who had attended the whole Breizhskiff 2021 series, the organisers decided to score the RS Aero fleet separately with GBR expat Jon Mills winning, local man Jacques Chamaillard 2nd and Thierry Collin from CV Lyon Mezieu in 3rd.

The hospitality provided by Club Nautique Berrois was excellent with local wine and food provided on the Friday and Saturday nights, a local goodie box for every competitor and Magnums of local wine for the prizegiving!

RS Aero - Singlehanded onto Van Roof
One huge benefit of the light weight RS Aero is in the ease of loading and transportation and the ability to do it quickly on your own if necessary. Similar to singlehanded roof topping onto a car is also possible with a higher van. A rear roller bar helps to rest, pivot and slide on. The other useful addition is a step to reach, if necessary.
Thanks to Jon for this video, loading his boat in 30 seconds after this event. Also, see the full detail on lifting singlehanded onto a car roof HERE.