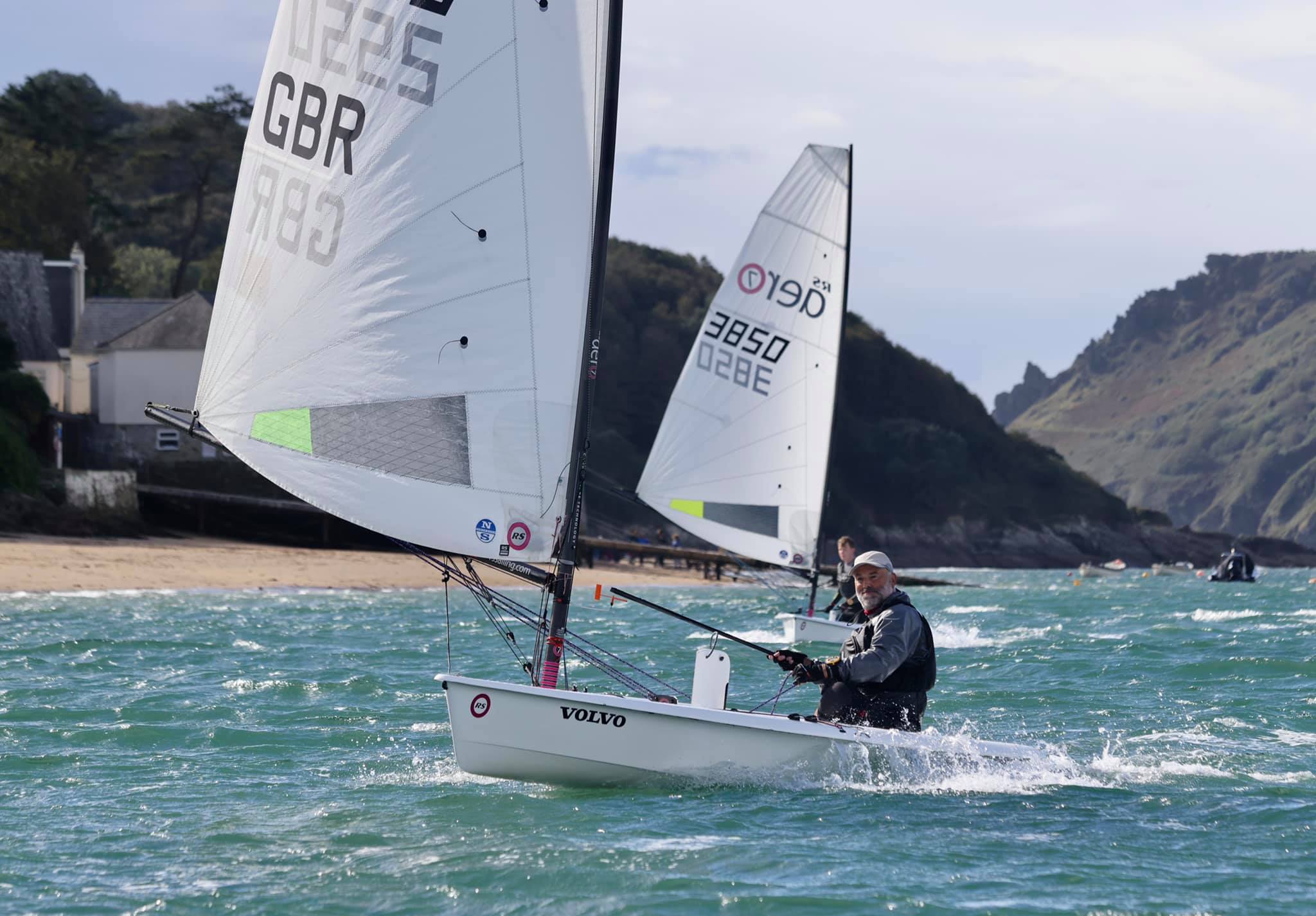 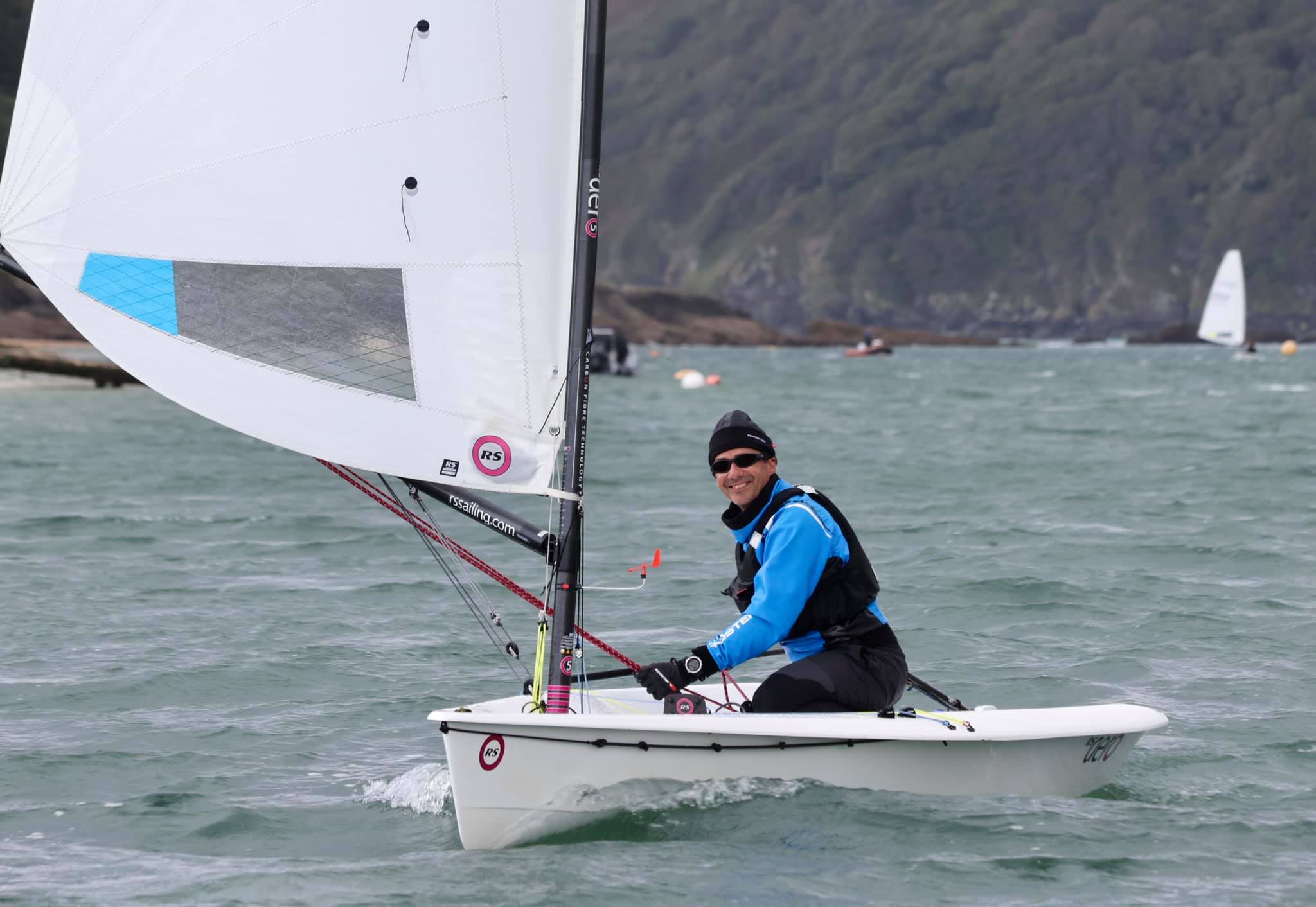 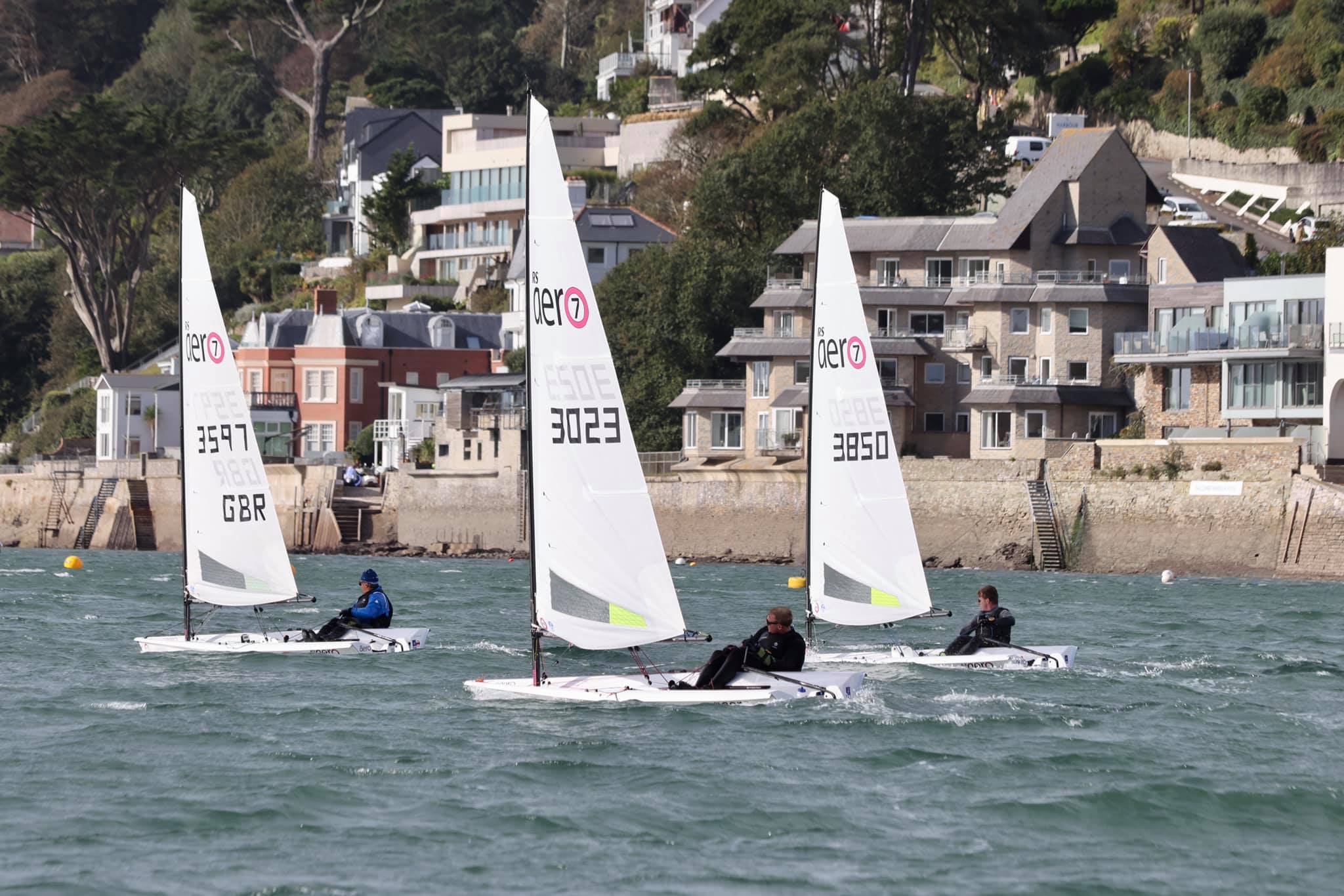 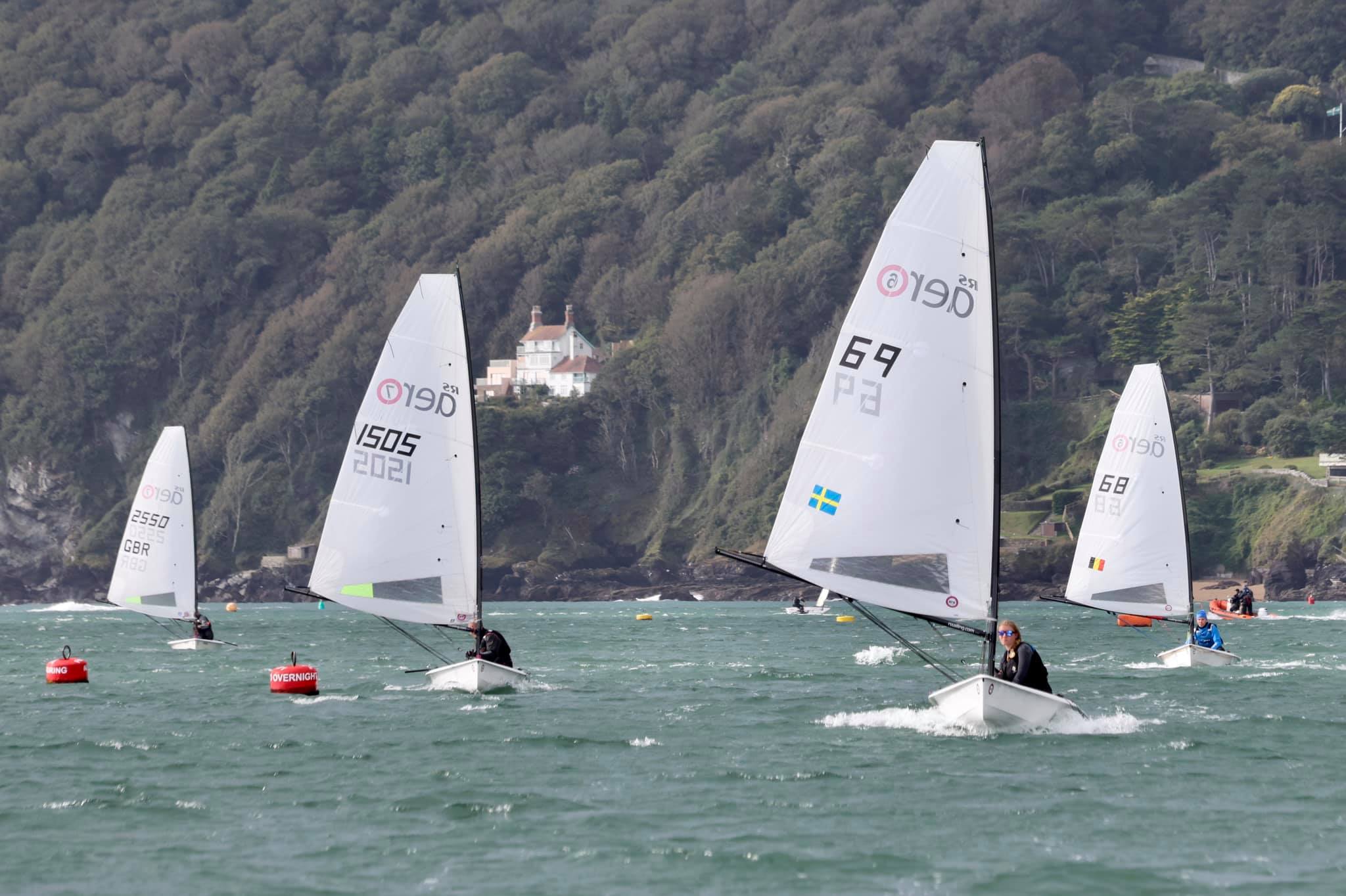 Salcombe RS Aero Open - Salcombe YC, Devon, UK, 2/3rd October
Thanks to Sarah Desjonqueres for her excellent report!
Nothing fazes an RS Aero sailor!
There are many perspectives from which one can view this weekend’s RS Aero Open Meeting at Salcombe YC. ‘Glorious racing’ was Peter Barton’s angle on the experience; unsurprising as he played his mainsheet like a finely tuned instrument, taming Sunday’s 35 knot gusts with ease. On the other hand, for Team Highcliffe, whilst thoroughly enjoying the event, they were overheard using more evocative words like ‘crazy and swirly’ and ‘wildest conditions I have ever sailed in’. Whether or not you spent more time swimming after your boat on Sunday, or swimming in it on Saturday, all the sailors can probably agree that they had a truly epic time in the estuary.

The weekend started with an RS Aero advance party from Highcliffe SC arriving in Devon a couple of days early to scout out the venue. The lucky four had the privilege of finding Salcombe at its sunniest best. After an evening of doing what visiting sailor’s do and testing out the local hostelries on Thursday, the fearless foursome set sail on Friday afternoon for a 21km Swallows & Amazon adventure exploring the creeks and beaches of the Kingsbridge estuary. They were spoilt. The sun shone and the river was free of summer traffic. With wind blowing in every single direction the quartet of Aeros were able to get up and down each branch of the river with ease and only the odd capsize. The water was tourquoise clear, the valleys verdant and the breeze kind. Surely, this was the most beautiful place in the world to sail?

For the sailors arriving Saturday morning, this could not have been further from the truth. The rain that was waiting for everyone in the car park at Batson Creek was tumbling from the sky in drenching sheets and contrary to ALL forecasts, seems to have absorbed all the wind into its massive skin soaking droplets. Incredibly, most of the RS Aero sailors were not put off by the lack of wind and the deluge from above, 14 dinghies rigged and launched for an afternoon out racing. Three (sensible) RS Aero sailors, having done their duty as trolley dollies, obviously, preferred to squelch their way along up to Salcombe YC in search of the wood burner and a bottle of rosé. For reasons of personal privacy, I won’t mention who came with me (Karl & Sue) to the Clubhouse…

After launching the boats in the heavy, vertical rain, the sailors raced all the way from mark 2 just by the Yacht Club terrace before heading up through The Bag, past Halwell Point, Saltstone and Widegates to mark 7 and back again, twice (I think, I stopped watching after the second rosé). I am told that after launching in calm winds, the first race at least gave the sailors some gusts and some swirly light winds to play with and there was talk of a beautiful rainbow which appeared momentarily, but all signs of any energy in the air disappeared completely by the second race. Some sailors reported getting a little cold toward the end, however, all arrived back smiling and pleased with their day on the water. There must be something about Aero sailors that means they don’t mind getting wet, probably because they are used to the spray from an incredibly fast reach or something. In the end Saturday’s racing went Chris Hatton’s way. He skilfully and probably patiently, took both races, leaving veterans Chris Jones and Peter Barton to settle for 2nd and 3rd place respectively in race one. Ellie Craig, racing the development RS Aero 6 rig, managed to nudge the boys further down the results by sneaking a fab 2nd place on PY for the second race.

After a scramble for the showers and a cold beer, several sailors returned to Salcombe YC for dinner and a dram in the evening. Much to the sailors’ pleasure, Salcombe town was running its second annual festival of live music that weekend and Salcombe YC had joined in. With full bellies, the sailors settled down in the cosy lounge, or nodded off in the corner, Peter, and to be serenaded by the blues musician Sam Jefferson, finishing the day with a glass in hand and the pleasure of actually feeling dry again.


So...so far Salcombe had delivered summer conditions and monsoon conditions, what could Sunday possibly bring our sailors? Oh that’s right. Hurricane time. I exaggerate obviously, but it would be fair to say that with the anemometer off Prawle Point picking up 49 knot gusts, the wind bending round the corners and accelerating down the valleys was never going to hand us an easy ride out there. Still, every single RS Aero sailor rigged and readied for Sunday racing with great enthusiasm. How hard could it be out there? The sun was shining and there was a gentle breeze blowing down through Batson Creek, lovely. The wind bomb hit us as we all turned right toward SYC; mains were dumped and controls yanked on quick smart. But we carried on regardless heading down the river and getting to enjoy a few screamy reaches up and down the start line from Small’s Cove to the Yacht Club and back again, before getting away to a clean start. It quickly became evident (well to me it did), that this was not the day to commit to a full fat hiking position, way too many wind shifts. The headers were violent and caught many out to windward. The thinking was, if we could at least make it to mark 2, and survive the gybe, the run down to mark 3 was going to be spectacular. And it was. Absolutely exhilarating. Sailing by the lee felt like the most comfortable position to be in and when the gusts tore through, the acceleration almost took your breath away. Already before the first leg had been completed, several sailors had been swimming, usually caught out by a swirling 30 knotter. Pretty quickly, the lead sailors established themselves. By the end of the run, Peter Barton, Richard Watsham, Chris Hatton, Ellie Craig and Karl Thorne had put some distance between themselves and the rest of the fleet. It was all about mainsheet control and reaction time I think. Near the back, the capsize count was increasing and bit by bit certain soggy, sailors and even some dry ones (ahem), peeled off the race course and headed back home, happy but done for the day.

By race 4, the wind had decided to ramp things up and try and empty the river of pesky boats. Only the truly confident/brave/experienced/unhinged stayed out to race. Most of us had had a fantastic blast out there, but had wisely decided to cut and run for home before we broke something, including ourselves. Ed Whitehead admitted later (over a beer) ‘honestly, I lost count of how many times I capsized’ - see photos ….. Huge kudos to the 6 sailors who raced and completed race 4, but with one discard available going back to base was the sensible decision for most. Peter Barton took both race wins on Sunday but with two 3rd places on Saturday. It was Chris Hatton’s performance the day before which gave him the edge and top podium position in the end. Huge credit must also go to Ellie Craig, out test driving the new RS Aero 6 rig and holding her own in the last race. She finished her Open Meeting in 3rd place and was the top placed lady. I need to mention too, a big well done to Dave Hairs, of team Highcliffe, finishing in 7th place overall but with the pleasing position of highest placed RS Aero 5. Brilliant racing everyone. And good luck at Lymington next weekend.

A thanks must go to Rooster for supporting the event and providing more prizes again.

And finally, thank you so much to Salcombe YC for not being put off by the dreadful weather forecasts, and for laying on racing all weekend, with a special thank you to all the RIB drivers who sat out in the rain on Saturday and acted as rescue on Sunday. SYC, your welcome at the Club was lovely, the estuary is simply stunning and on behalf of Team Highcliffe and I am sure all the other RS Aero sailors, we like to thank you for the whole weekend and we can’t wait to come back again!
PHOTOS by Lucy Burn
Facebook Album
Autumn 2021 Gallery for larger photos