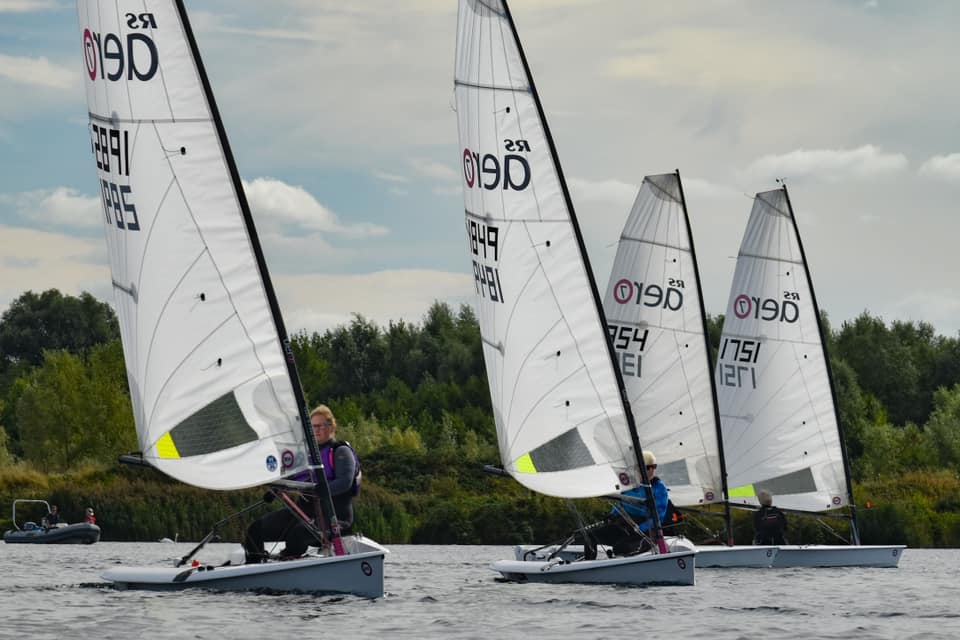 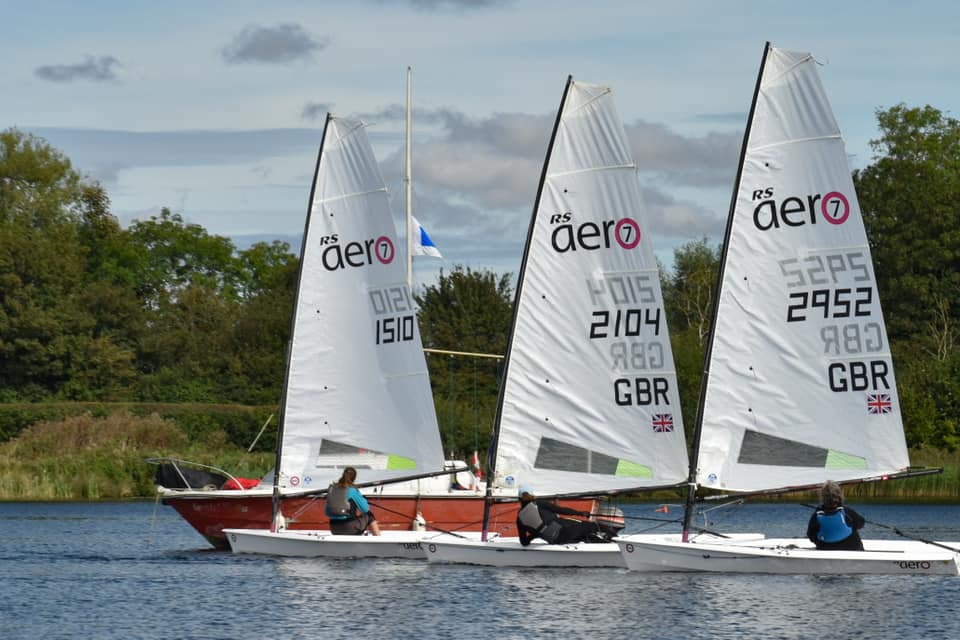 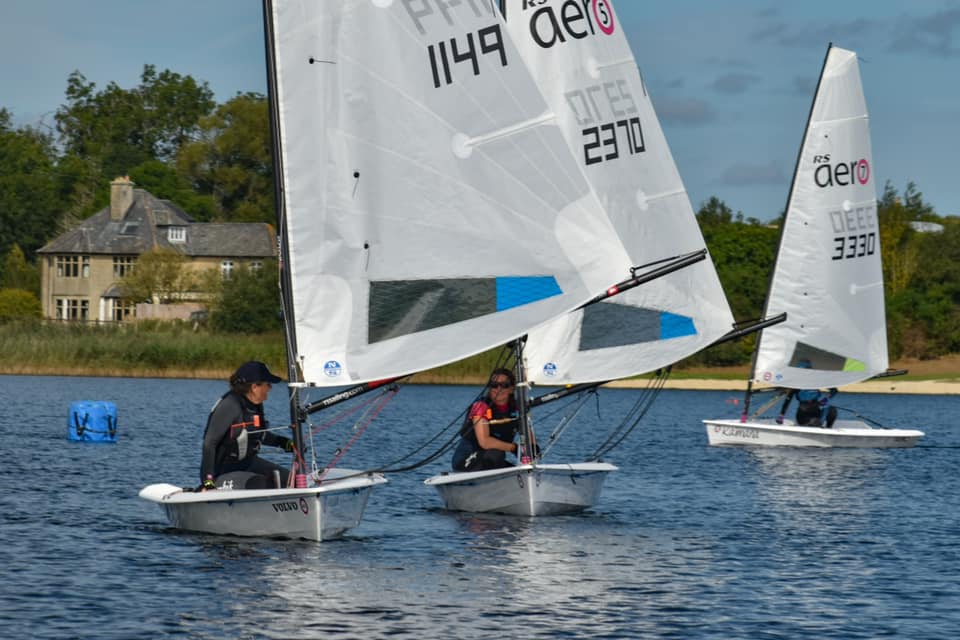 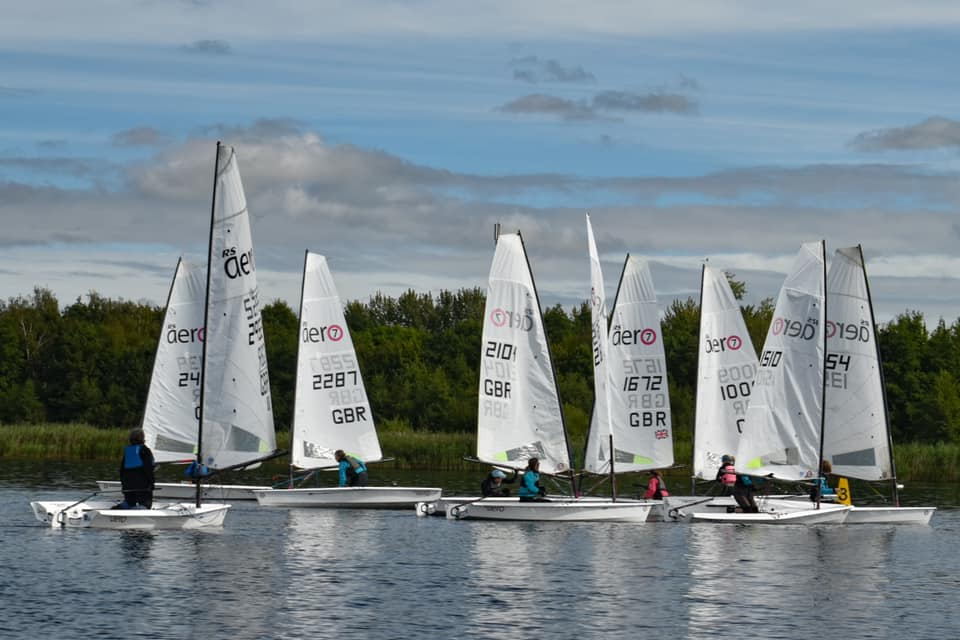 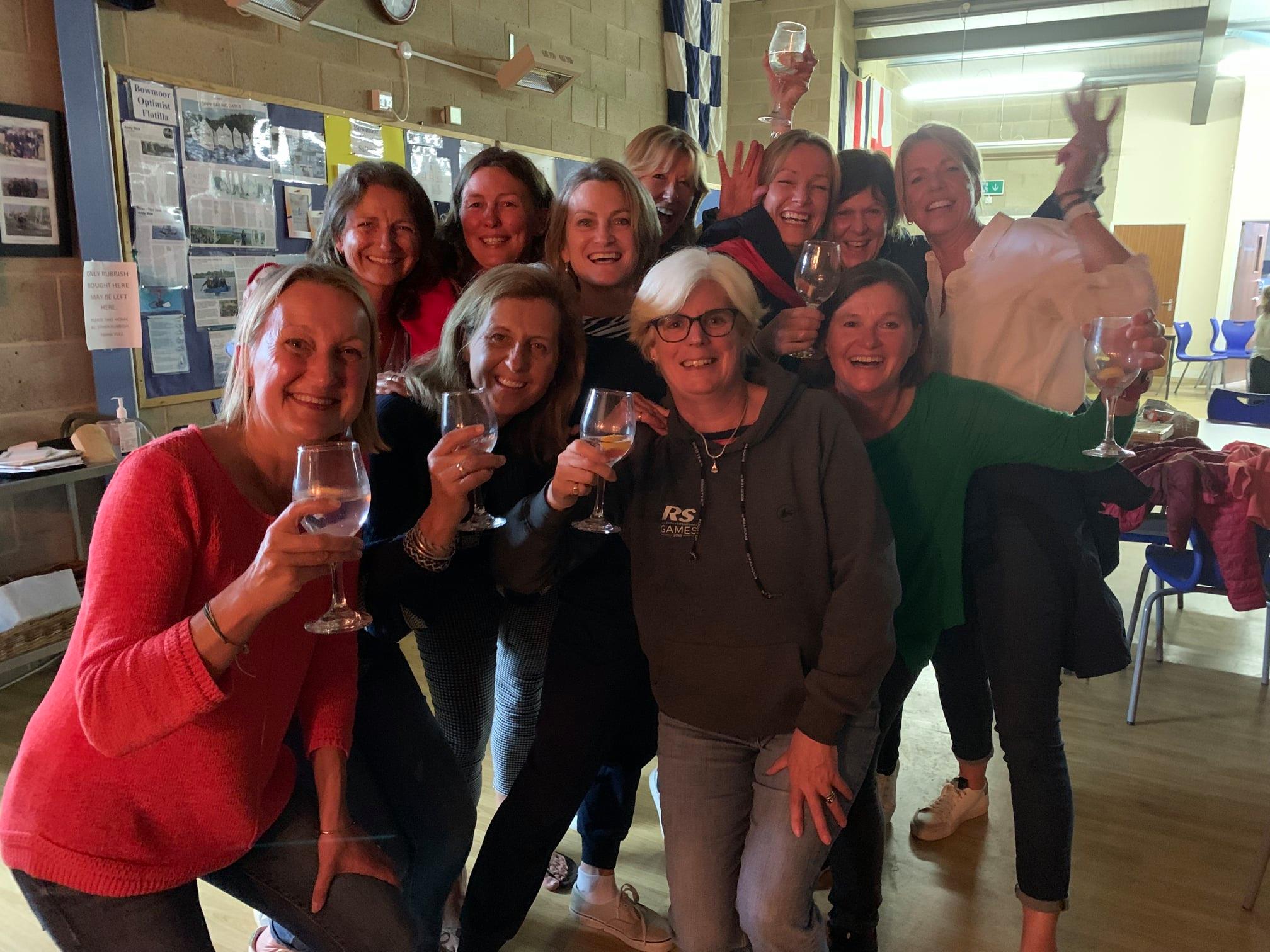 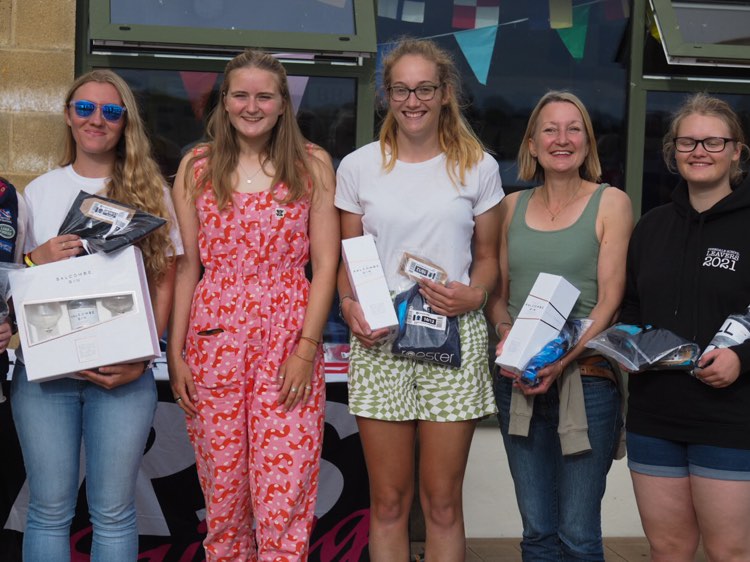 Firstly, you will need the world's friendliest lakeside sailing club, some sleeping pods and a well-stocked bar. Then, take 36 wonderful lady sailors and liberally douse them with wisdom from four hugely knowledgeable, top instructors sprinkling in a little warm September sunshine as you go. Then, gently stir in some wing flicks and tricks along with anti-wrinkle advice and some slick roll tack demos and simply allow the ladies to improve quietly on a calm body of water. Then, before giving them a crazy shake on the dance floor, gently marinade them in Salcombe Gin. With luck they will be ready for some top-level Championship racing the next day. Easy.

And, so it was that on 18th & 19th September 2021, Charlie Sansom and his team at Bowmoor SC, welcomed 36 women and a full training team to the first ever RS Aero Ladies training day and Championship, sponsored by Salcombe Gin and Rooster, and although the wind was limp all weekend, to say the least, nothing could dampen the enthusiasm and appetite for the event.

Saturday's training day began out on the grass where we were all treated to a masterclass from Sammy Isaacs-Johnson and Andrew (Frosty) Frost, in ways to prevent your sail from failing down, how to avoid saggy hiking bums and most importantly, on what to do with your wrinkles... in the sails that is. There were plenty of discussions and demonstrations on where best to sit to keep good trim, and on hiking techniques, particularly for those of a shorter stature. We all leaned in and listened like perfect students. Well, we did until the concentrated silence was disrupted by a car alarm, triggered, apparently, by a window that had been "left open to make sure the wine didn't get too warm". No comment.

After a good 2 hour on-land training session we prepared to go out and practice our new skills on the millpond that beckoned. All along the grassy banks, ladies were trying out new rigging techniques and pretending that they had remembered everything they'd been taught. With halyards jammed tightly into cleats like never before, we bobbed out onto the lake to join our various different training groups to do an experiment on whether the heavier ladies would be able to float as fast as the lighter ones. Well, that's what it felt like. As the former, I would suggest that extra ballast did not pay so well, but then I managed to 'park' my Aero, so I may not be the best example.

Over lunch we watched, with hope, as a lovely little breeze spread across the lake. Taking advantage of this, Frosty leapt into action to flex his World Champion expertise and give us all a demo in roll tacking and roll gybing. The super Melissa Meredith and our totally cool event organiser Caitie Atkin went lakeside and articulately talked us through each movement with a step-by-step guide to the whole roll process. It was brilliant. Then it was over to us to give it a go. As we launched, the wind wandered off elsewhere, but that did not stop us. Out we went, rolls we tried and capsizes we did (well the odd 1 or 2). You could hear laughter up and down the lake. It was heart-warming.

Now, with a Championship looming the next day, it was key that the ladies had a healthy meal and an early night on Saturday, in preparation and all that. After all, there was some gin to win. Back at the pods however, chez the Hayling Ladies, a pres party was under way; the bubbles were flowing and Bridget had even abandoned her crocheting for the evening. As we watched the moon rise over the far side of the lake, the sound of Salcombe Gin being poured into a long glass wandered across the field and began subtly to lure us toward the Club House.

Then, overwhelmed by the dulcet tones of Beyoncé calling all the 'Single Ladies', the pre-race early night idea drowned itself in a gin and elderberry tonic and the dance floor filled. DJ Caitie A was in 'da house' now, and absolutely killed it with some banging tunes that outdid anything from the RS Aero Nationals (apparently). With the odd dance floor interruption for an Indian takeaway delivery and the distraction of 'round the table' climbing competitions, masterfully executed by Teresa Doran, oh and Bridget doing the splits, the evening was one raucous dance off, swimming in laughter and Salcombe Gin. At this point, most were quite glad the weather wasn't going to be honkingly windy tomorrow. Thank you to Bowmoor SC for allowing us to be so crazy.

Contrary to all our arm lifting efforts of the night before, every lady was up early and signed on to race by 9.30am. Weatherwise, we had pretty much the same windless effort as the day before, although there was a slight ripple disturbing the mirrored surface this morning. Plan for the day was 2 races back to back in the morning, round a funky lake shaped course, followed by lunch and a final afternoon race to end the Championship. Launching bang on 10:30, the 7 rigs went first, under a U-flag because we are all so well behaved, with the 5 rigs chasing after. That said, in both race 2 & 3 there were a couple of over eager sailors who ended up OCS - not bad in no wind.

Starting with such little puff is always a tricky one, and there was definitely a rafting incident further up the line near the pin end on one start. But everyone comported themselves perfectly, 720's were done and the racing was fun and fair. In fact, at one point in the second race there were 12 boats which pretty much arrived, slowly, at the gybe mark at the same time. At this point, several ladies discussed the state of play with ladies in the boats adjacent to them, there was some clarification of the rules and then, in the space of about 5 seconds, every single boat rounded the mark, calmly and politely without a single expletive uttered or a single boat to boat bump. It was quite beautiful.

Looking up and down the racing fleet, there was a marked divide in the racing styles. Up at the front was the younger contingent, sailing with conviction, speed and silence stretching their lead with each leg. As you went further down the fleet, you could start to hear conversations between sailors, and then nearer the back, there was simply laughter. Plenty of place swapping took place throughout all 3 races, a bad start didn't necessarily translate into a bad result and vice versa. It definitely paid to watch for the gusts, if you managed to manoeuvre your boat into a dark blue bit, then you could make up some serious ground. There were also some sizeable lifts to capitalise on and some pretty hefty headers both of which called for the roll tack training to be put into practice.

The leading pack of ladies seemed to fly downwind and they looked like they had totally nailed the roll gybes which gave them those important extra bits of acceleration. Throughout the racing, the wind flicked on and off like a light, and it took some proper concentration to keep the boat flat and the tell tales horizontal when the lake mirrored over. To be completely honest, there were moments when you had to watch the reeds gently passing by as an indication that you were actually moving as the mark just didn't seem to be getting any closer. All good practice though...

In the end we did it, all 3 races in the bag. Every competitor finished every race with a sense of achievement and a smile. Well done everyone.

All that's left to say now is a huge thank you to Caitie Atkin, the RS Aero ladies representative for organising the event and to the trainers Sammy, Frosty and Melissa who gave up so much of their time and shared so much of their knowledge. Thank you to the whole team at Bowmoor who laid on a great race day, a super lunch and a crazy party. Thank you to Salcombe Gin and Rooster for your generous sponsorship and prizes. And thank you to all the ladies who came along, you are a truly fantastic bunch of women with and it was an honour to have spent the weekend with you all.

Finally, a big congratulations go to the winners of the first ever RS Aero Ladies Championships.
In the RS Aero 7s all 3 leading ladies finished with 4 points but it was Ellie Craig of Starcross who took first place, with Iona Willows of Lymington Town/Dorchester SC taking 2nd place and Abigail Larr of Draycote Water in 3rd position.
Bagging the RS Aero 5 title was local lady Sophie Van Theil followed in by her team mate Charlotte Hitchmough in 2nd position and Francesca Murphy in 3rd place.

Thank-you everyone. Roll on the next event!