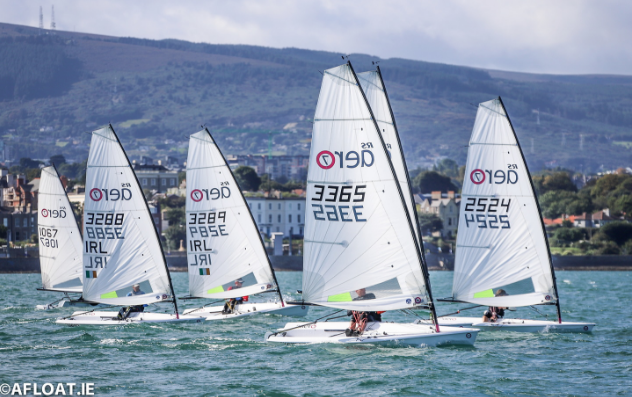 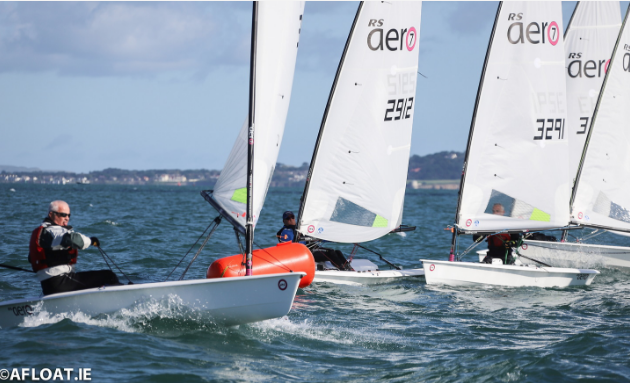 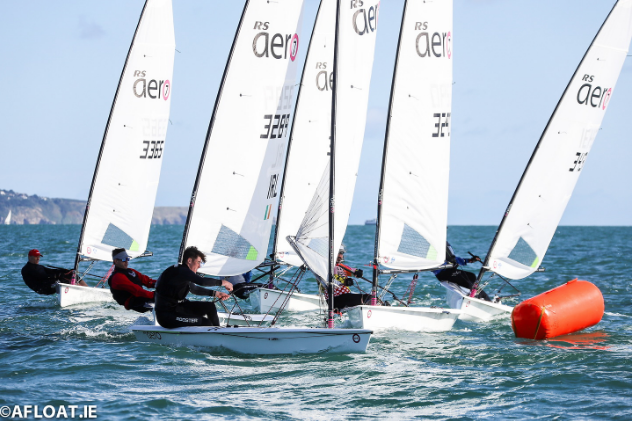 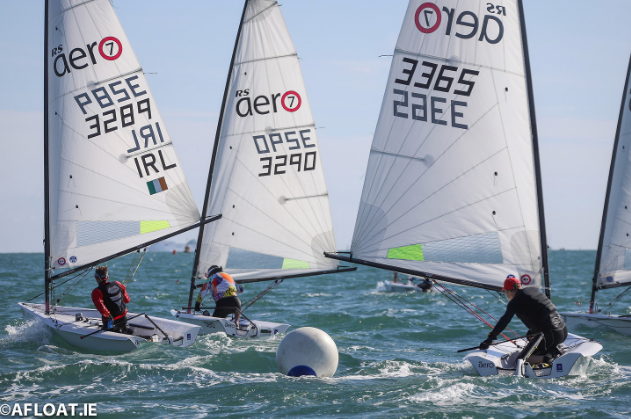 RS Aero Irish Open National Championship - Dun Laoghaire, Dublin, Ireland, 18/19 Sept
Thanks to Brendan Foley for his report;
RS Aeros have 18 boats at the first ever Irish National Championships in Dun Laoghaire
Hammy Baker of Strangford Lough has won the RS Aero Irish National Championships on a very impressive score of three first places with a discard of a sixth. The RS Aero Irish Nationals sponsored by Irish National Marine Services were held this Saturday and Sunday at the Irish National Sailing Club in Dun Laoghaire. The event welcomed 18 RS Aeros with a stellar line up of top class competitors and those newer to the class looking to learn and bring on their racing. All sailors choose to compete in the RS Aero 7 rig. Class President, Brendan Foley was delighted “With 18 of the 30 RS Aeros in Ireland competing here today, the Aero class has really arrived – there are few other classes where so many past champions in other classes are sailing together and so many new people are starting their racing journey, all in a friendly, sharing environment”.

On the water, Baker was pushed hard by Howth’s Paul McMahon who opened the series on the Saturday with a win in frustratingly light and fickle winds. Only just for McMahon, as Roy Van Maanen who had been leading started to sail an extra lap – letting McMahon in, who in his excitement roll gybed so hard he fell out of his boat. A quick re-righting was enough to get McMahon across the line in first. Noel Butler of the National Yacht Club was second and Sean Craig back to try his hand at Aeros got into the third spot. So light was the wind after race one, that Race Officer Michael Conway of Wexford decided after a wait to abandon and send the fleet home.

Thankfully, Sunday brought the much awaited breeze gusting at times into the low twenties. A clear 1,2,3, emerged in these conditions with Hammy, Paul and Daragh Sheridan (Howth YC) consistently in the top 3. Hard hiking, playing the shifts and good waves technique downwind were the order of the day and while the first three places were secured a massive battle was going on for fourth between Brendan Foley of the Royal St George YC, Noel Butler and Robert Howe (ex UK Laser ace) now sailing from Monkstown Bay SC. All three boats finished on 14 points with the tie-break falling in favour of Butler in 4th, Foley in 5th and Howe in 6th. Howe’s clubmate Emmet O’Sullivan was fast in heavy condition and put in a very credible 9th with another Monkstown Bay sailor Robbie Sullivan swopping his RS400 for a blast in the RS Aero and coming home in 11th.

In this brilliant one design fleet places were being traded faster than bitcoin, with a missed shift or bad tack resulting in places lost or gained. Debutant competitors from Greystones SC, Conor Galligan (10th) and Adam Leddy (12th), loved their introduction into the RS Aero class and put in strong performances in a field stacked with champions. The first Master was Sean Craig of the Royal St George YC in 7th place who just edged Van Maanen of Greystones and George in 8th place and second Master. Emmet O’Sullivan was third Master.

13th was lucky for some with Sarah ‘Skinny’ Dwyer battling her 7 rig around the course to win the first Lady prize. Normally a 5 rig sailor, completing all 4 races in a 7 was a great achievement and Skinny along with many of the competitors, as their legs were aching, dreamed of the possibility of a forthcoming 6 rig. Demand for the 6 rig is expected to be high with sailors interested in the option to move up from the RS Aero 5 and down from the RS Aero 7. The RS Aero 6, similar to the ILCA 6, is tipped to be boat of choice for many sailors in Ireland.

Race management legend Robin Gray was first Grand Master in 14th with club mate from Ballyholme Christina Cunningham coming home in 15th place, who like Skinny is normally an RS Aero 5 sailor but stuck it out to get her RS Aero 7 around the track. John Phelan of Howth YC, Mick Mc Cambridge of National YC and Keith Maxwell of East Down YC certainly equipped themselves well in the very challenging conditions on the Sunday. Protest Committee Chair Gordon Davies was sad to not meet any of the competitors as there were no protests.

Joan Sheffield, Captain of the host Irish National Sailing Club presented the prizes in beautiful sunshine overlooking Dublin bay from their stunning outdoor roof deck. There was great buzz and everyone is looking forward to the next event at Greystones on 23/24th of October.
Full Photo Gallery thanks to by Afloat.ie