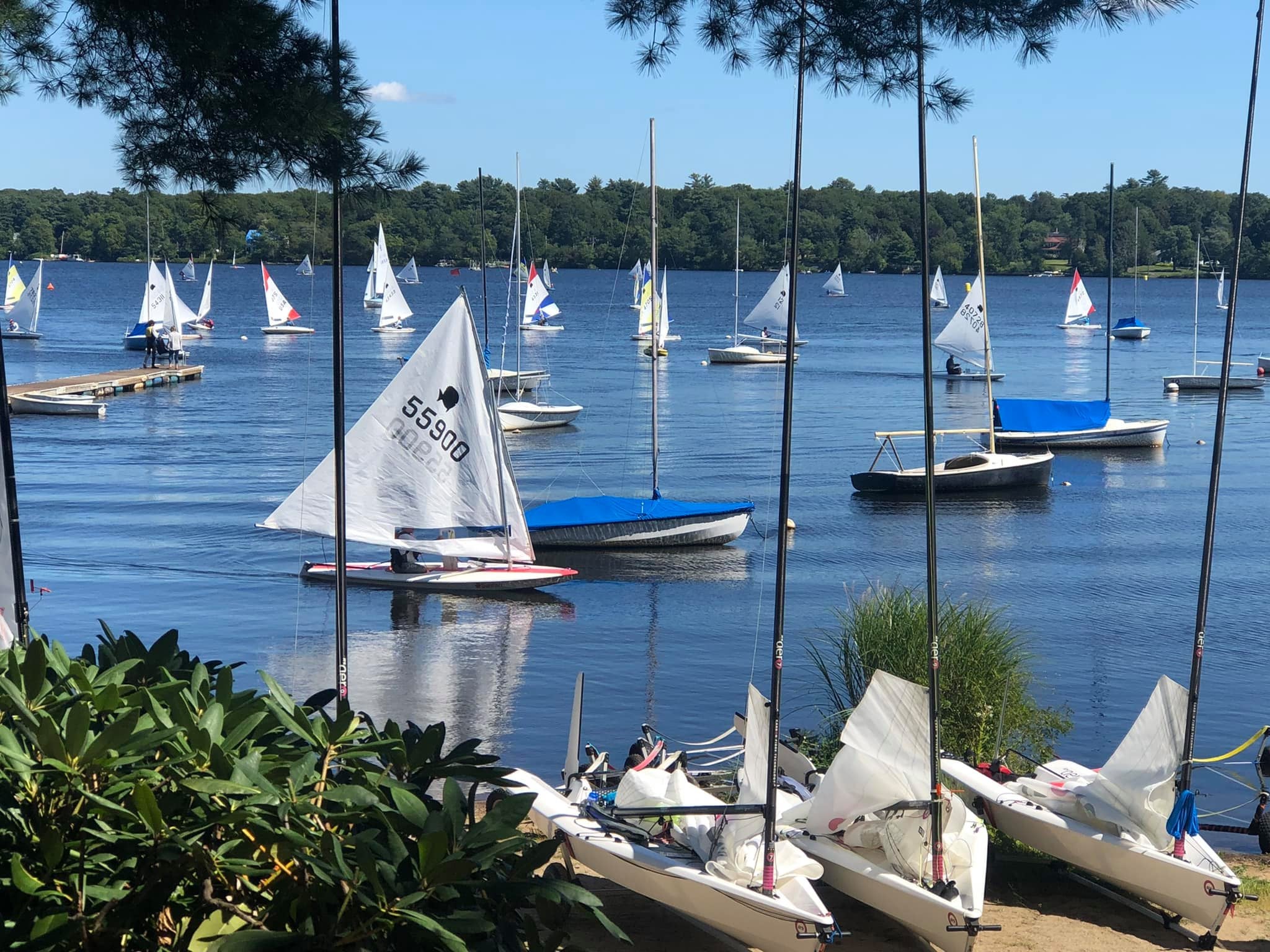 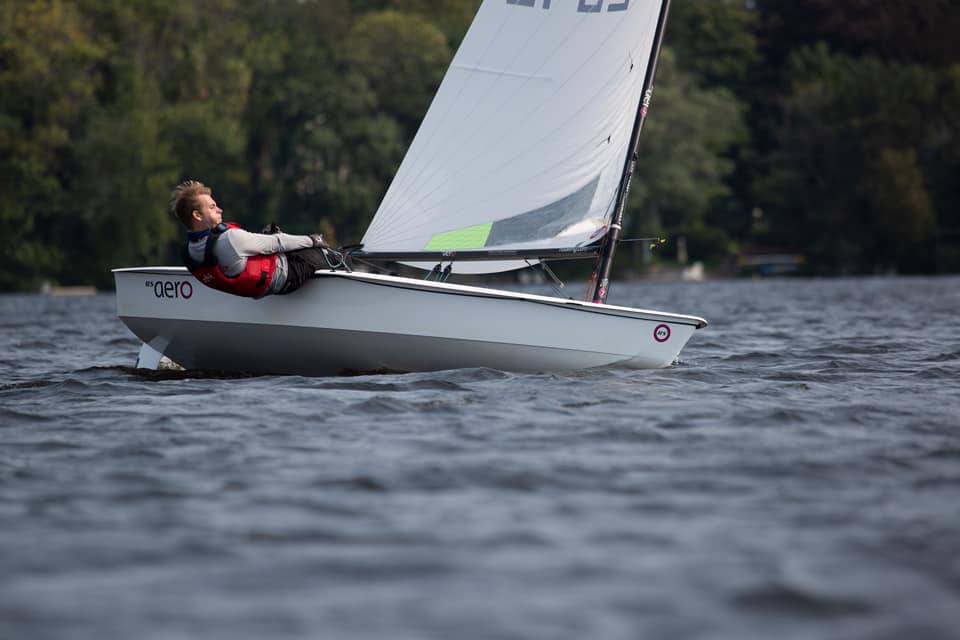 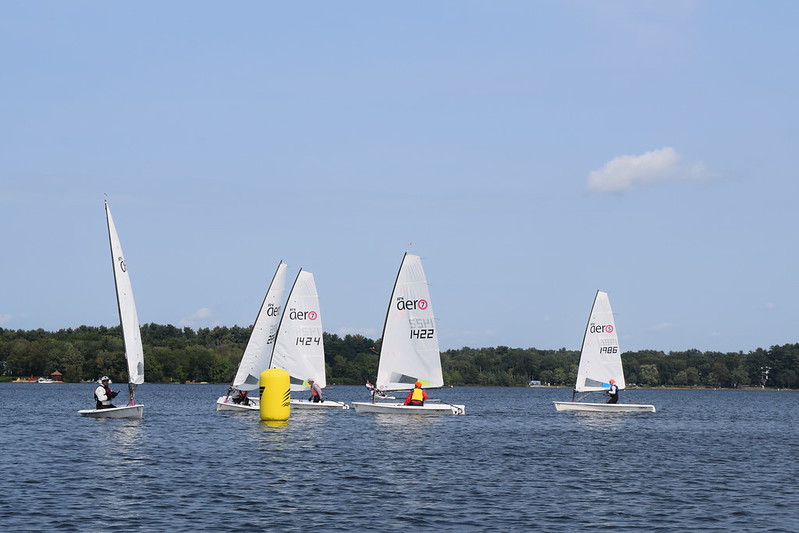 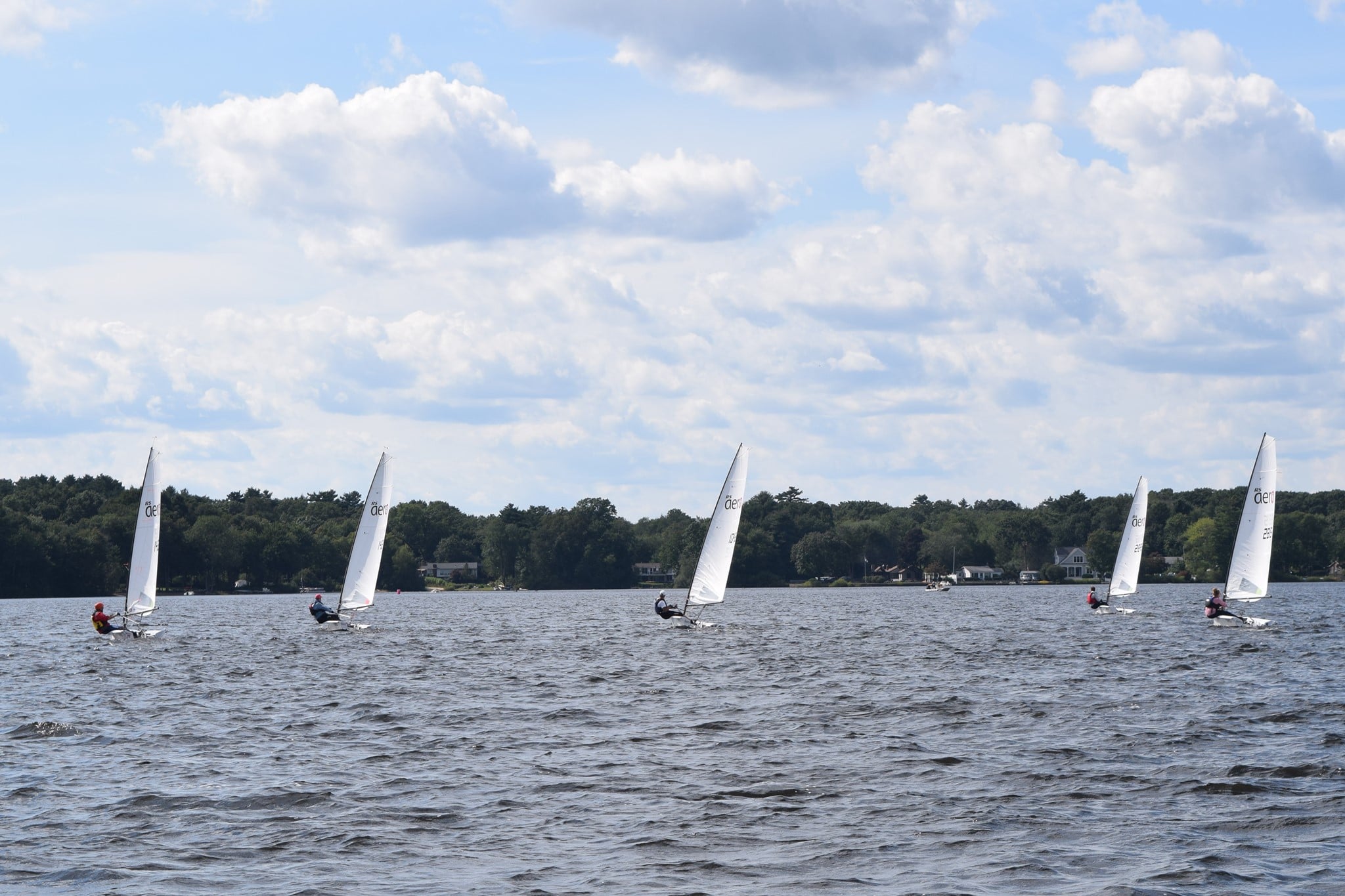 Ten RS Aero sailors from every state in New England except Vermont descended on Lake Massapoag in Massachusetts on the weekend of Sep 11/12 for another dose of what the Massapoag YC Annual Regatta is famous for - a friendly welcoming bunch of volunteers; typical lake sailing with all the shifts and puffs and slam dunk headers one expects on a small lake; and food, food, food and more food. Seriously.

This year we were joined by 4 Day Sailers, 12 Lasers, and 35 Sunfish. The weather was warm and sunny with clear blue skies - eerily reminiscent to me of the weather on September 11 in 2001. The yacht club flag was flown at half mast and we observed a minute of silence during the skippers’ meeting to show respect for all the lives that were lost on that terrible day exactly 20 years ago.

The winds were 8-10kn gusting to 15kn for the seven races on Saturday, increasing to 10-15kn gusting into the 20kns for the three races on Sunday. The wind was generally from the SW and SSW, a direction with full strength winds at the start and for most of the beat, becoming lighter and more shifty as one approached the windward mark nearer to the south-western shore of the lake. It was a day for staying in the puffs, trying to stay in phase with the shifts, and mastering the puzzle of the swirling winds near the windward mark.

Phil Myerson - representing Cedar Point YC in Connecticut - did not have a good start to the regatta. He missed the first race dealing with an outhaul line that had annoyingly decided to go and hide inside his boom. He joined us for the second race and thereafter sailed an almost perfect regatta in his 7 rig, hanging with the leading pack for most of the day, and taking first place overall on handicap.

The top three RS Aero sailors at the home club are undoubtedly John Eckart, Eric Aker and Chris Stow. Any of the three of them could have been expected to win the regatta before Phil showed up and dominated the event. Of the three, John Eckart has had the least time in the RS Aero, as his club racing and regatta entries are mainly in the Flying Scot class with his wife Connie as crew. But John is one of those guys who seems to be fast in any class he sails. Using a 9 rig he sailed a consistent series, placing in the top three in seven out of ten races, to take 2nd place overall. On the other hand, Eric Aker was a founder member of the fleet at Massapoag YC in 2015 and has probably put more hours into sailing an Aero in the last 7 years in club sailing, regattas and training than almost anyone else I know in the class. He sailed a 7 rig in this regatta and was placed third overall. Chris Stow in a 9 rig was looking forward to taking advantage of being on the heavy end of the RS Aero sailor weight range to power his way to victory in this regatta, but it was not to be. Although often leading the pack up the first beat, he had difficulty with the tricky winds around the windward mark and had to settle for 5th place overall.

I was pleased to see old friends Sally Sharp and Gary Orkney from New Hampshire at this regatta again. They both changed down one rig for the stronger winds on the second day - Sally from 7 to 5 and Gary from 9 to 7. The change kept them in the race in the heavier winds without giving them the benefit of the more favorable handicap from the smaller rigs, thanks to RS Aero Class Rule H.3.2 (look it up). Sally placed 4th overall and Gary was 6th.


While it’s always good to meet up with old friends, I got the biggest kick at this event from seeing three sailors who are relatively new to the RS Aero sailing in their first RS Aero regatta. The conditions were challenging at times, even for experienced sailors, so it was a real pleasure to see these three newbies sailing so well. Kate Mason is a champion high school sailor from Maine with experience mainly in 420s. She had sailed her Aero a few times before this event but had never raced it. On Saturday, sailing a 7 rig, she had two top 5 finishes. We hope to see her back at future regattas at MYC.. Patrick Chokron is a new member at Massapoag YC this year. He was sailing a different class until he saw us racing our Aeros in the club races, and decided almost straight away that he wanted to join us. He bought a secondhand RS Aero from Eric Aker and has been racing it in the Sunday pursuit races at MYC since July. Jeff Curtis is (or maybe was) a hang glider pilot from north-east Massachusetts. This year he decided he wanted to buy a singlehanded sailing dinghy and start racing it. He did his research and decided that the RS Aero would be the best boat for him (of course) and came down to Massapaog YC earlier in the summer to try out an Aero and watch us racing. That convinced him to order a new RS Aero from Zim Sailing. He took delivery of his new boat in August and has started racing in the club races at MYC. Jeff in a 7 rig scored a couple of third places in this regatta but Patrick just beat him for 7th place overall by 1.5 points - showing great promise for both of them.

Derek Stow (from Rhode Island) stumbled around the course in the bottom half of the fleet in the seven races on Saturday which was the longest day of sailing he had experienced since before the pandemic. On Sunday morning he woke up aching all over and decided to listen to what his body was telling him… which was to watch Sunday’s races from the yacht club deck. He still clings to the illusion that if he works on his fitness and stamina and practices a lot he will, one day, have a podium finish at this regatta.
Thanks to all the volunteers at MYC who delivered such a wonderful weekend for us - on and off the water. Thanks to the RS Aero sailors from other clubs who joined us for this event. And a special, personal thank you to Patrick and Jeff, the newest members of the RS Aero fleet at Lake Massapoag, whose enthusiasm and persistence are an inspiration to us all.

There is organized racing for RS Aeros at Massapaog YC from May to October. This is currently the only active RS Aero fleet in Massachusetts. Check out the club website at https://www.sailmyc.org. Come and join us.