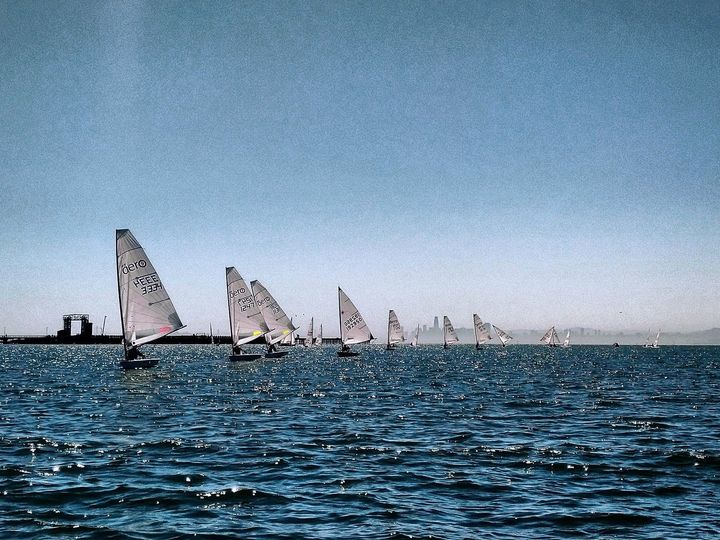 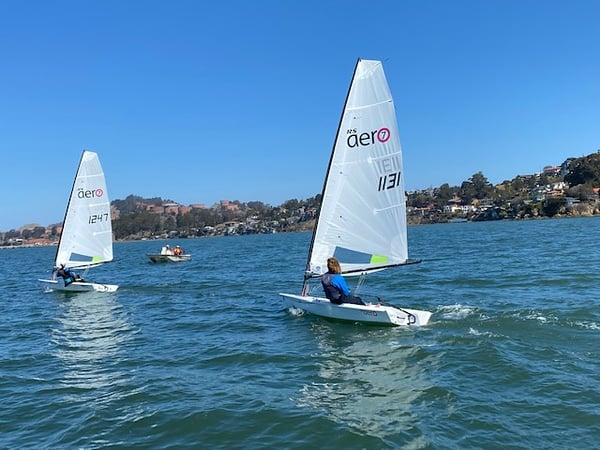 Totally Dinghy Regatta - Richmond YC, San Francisco Bay, California, USA, Sept 11/12
An excellent weekend of racing at Richmond Yacht Club with the breeze from 0 to 15kn and tight racing. This is the largest fleet we have had on San Francisco Bay so far!Congratulations to James Baurley of Alamitos Bay YC on the overall win in his RS Aero 9 taking four of the five races and to Eoghan Gloster of Santa Barbara for finishing top RS Aero 7 in 4th place.
Thanks to Craig Perez for his detailed summary;
"As you may notice, our California fleet is VERY international with six different counties represented. Wow! Again, thank you all for making the effort to come join the fun and sail on the world class San Francisco Bay.
While the facilities and hospitality were as expected, the normal blowy SF Bay did not show itself as the breeze only topped 12 knots on the first day. The "you should have been here yesterday" mantra for sailors all over the world held true as all who came to warmup and practice the day before on Friday experienced 12-15 knots of breeze. Still well below the typical late summer of 18-20 knots however very civilized.
However, even with the lighter breeze, Saturday's racing was great with lead changes occurring regularly with James Baurley in the "9" fleet from Mammoth Lakes CA taking first in race one and race three. Michael Sealey of Chico CA won race two from start to finish with the result never in doubt. Greg Warner led both race one and three however must have thought he was in Alice in Wonderland as James somehow pulled a rabbit out of his hat passing him on the last beat all the time grinning like the Cheshire cat (that movie still creeps me out!). In the "7" fleet, again the racing was very close as mother (Catherine Gloster) and son (Eoghan) showed the newer Aero sailors how to keep a boat moving through the water. In all but race three, Eoghan showed little respect for mom as he won the first two races of the series with Catherine winning the last race of the day and Chris Davidson finishing with three thirds. Back on shore, the Club provided free heavy hors d'oeuvres on the upper deck overlooking one of the best views of the San Francisco City Front.
After double helpings of poo poos were consumed (wow can fifteen-year olds eat, Eoghan Gloster), we all sat down for a Tec talk and listen to the winners of the day tell us all "how they did it". Questions were answered and racing tactics and currents were discussed. FYI, when the fleet started to form, I started a tradition of sharing information to help bring the entire fleet up to speed and give everyone a chance to ask questions.
On Sunday, the day of worship, the fleet all prayed for wind as the race committee sent us out in a softening breeze, on the longest course with a giant weather leg, against a strong current. I actually asked the race committee if they were mad at us for something. As predicted, the wind went down to crouch-in-the-boat mode testing all of us how long we can be on our knees before we all cry "uncle"(it was a religious experience for sure). Yes indeed, the race was abandoned (time limit) with James and myself well out in front with only the leeward mark to round. For the next two races, the race committee moved the marks in tighter so the double windward leeward course would be shorter and more likely to be completed. As it turns out, the wind filled back in nicely to 5-8 knots making for close racing and a great sail back into the Club. Once again James collected two more bullets in the "9" fleet, with Eoghan doing the same in the "7" fleet. Catherine finished up day one with another second and a third with Chris Davidson collecting another third and a second just behind Eoghan in race five. After everyone was out of the water and mostly packed up, we held our second Tec Talk focusing on boat speed and what strings the winners were pulling. Again, everyone shares, and everyone learns.
As for the "new guys on the block", Patrick Gay, Mike Josselyn, and Chris Cartwright are all new to the boat with Mike and Patrick taking delivery of brand-new boats the previous week. As a matter of fact, the driving force behind their decision is Barbara Smith. Barbara has become a mainstay of the fleet almost never missing a race or clinic, and when she does, she lends her boat out to new prospective buyers. In addition, almost every Wednesday night Club race she can be seen racing her Aero mixing it up with the keelboaters and a few Laser sailors. To date, Barbara is directly responsible for three new RS Aero owners including Mike Josselyn just this July.
All an all a fantastic weekend of racing and a great showing of the RS Aero to the Club and the fleet of grumpy Laser sailors. After racing on Sunday, I was approached by three Laser sailors about costs and the availability of used boats. They were all impressed at the speed of the RS Aero in both light and medium breeze."