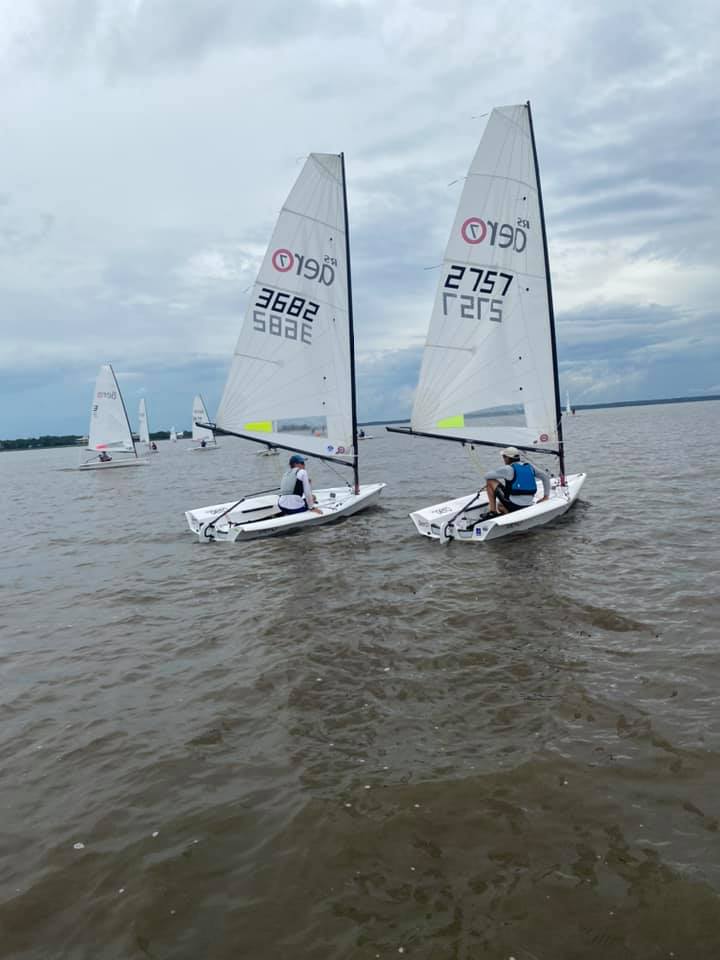 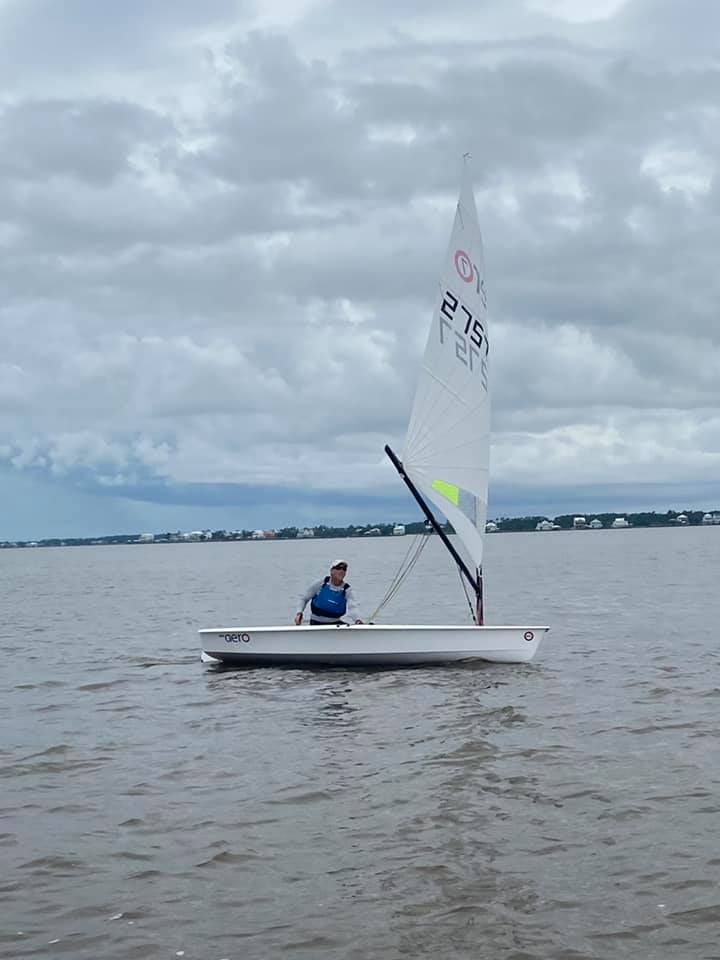 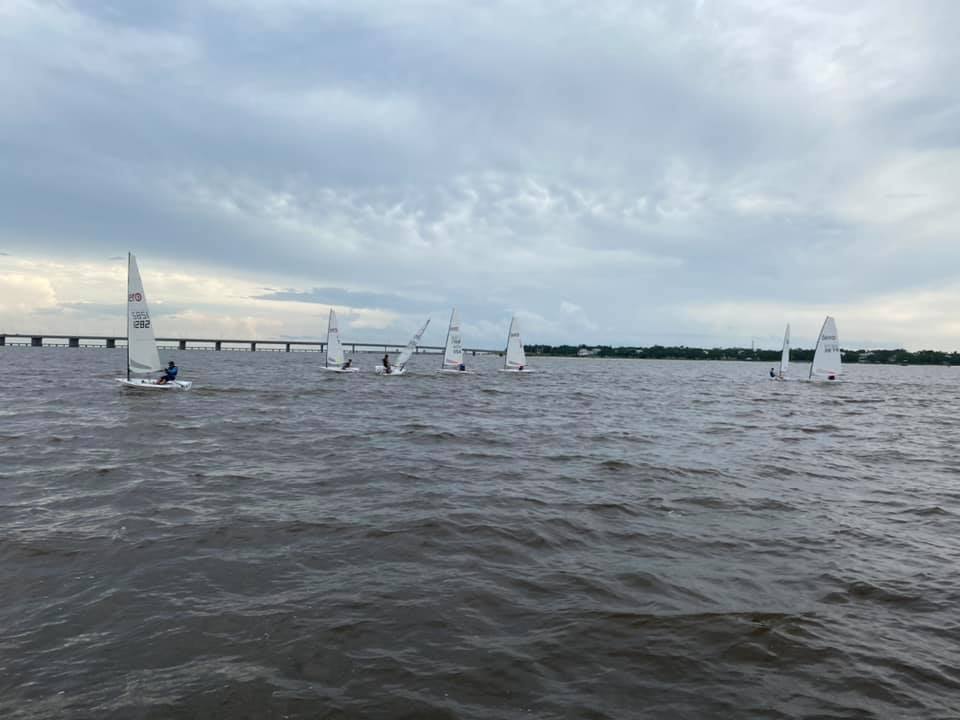 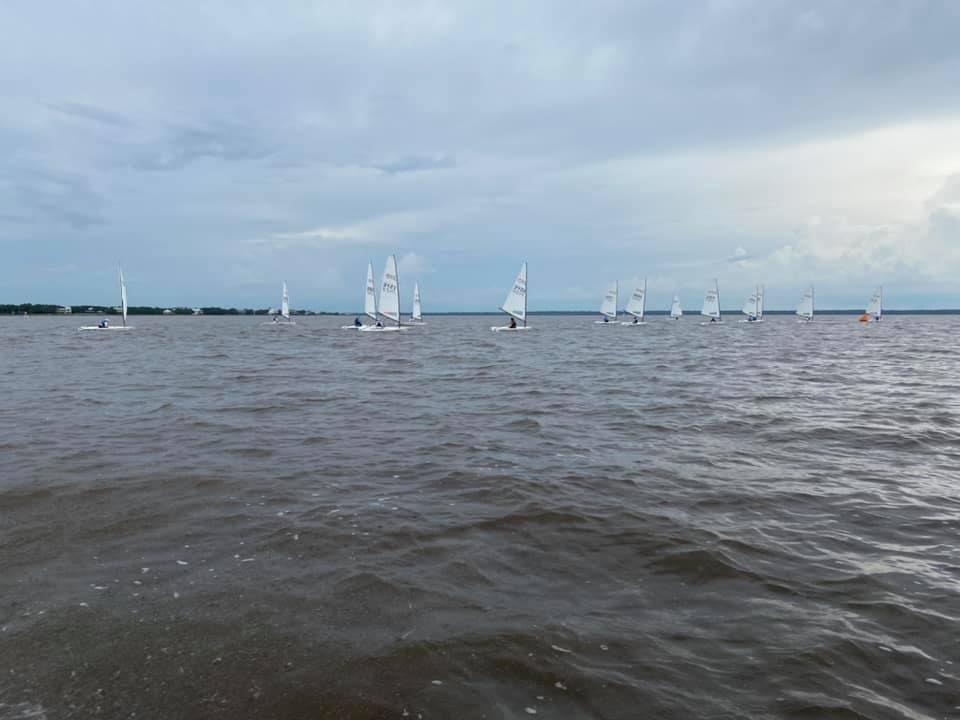 Thanks to Marc Jacobi for his summary report;
Bay Waveland Yacht Club in Bay St Louis, Mississippi hosted the RS Aero 2021 North American Championship. 31 sailors were entered for the regatta, which saw conditions ranging from 3-22+ knot winds. The entire fleet of RS Aero 5, 7 and 9s sailed together, with European handicap factors used to determine corrected and overall positions.
Day 1 saw the lightest breezes of the event, oscillating and going right throughout the day. This made it difficult for the RC to get the course and start line square, resulting in several delays and general recalls for Race 1. After that the fleet settled down (even if the wind didn't), resulting in one more race before the RC sent sailors home in a dying Southeasterly. Of course, 15 minutes after making the call the seabreeze filled in...
Day 1 was tailor-made for the RS Aero 9s, their superior horsepower allowing them to punch through the chop on the shallow lake. Class newcomer Bob Hodges easily took to the RS Aero, pushing Marc Jacobi in Race 2 before an unfortunate capsize on the second beat. Bob Patterson from Melbourne FL took advantage of Bob's capsize to scoot into second over the line and held that to the finish.
In the RS Aero 7s, local hotshot Ricky Welsh staked his claim early by placing 3rd and 2nd on corrected time, an impressive performance given the light wind. North American Class President Hank Saurage was right behind Ricky in Race 1 but a tumble in Race 2 meant he had to be consistent for the rest of the event. In the RS Aero 5s, Cynthia (CC) Griffith from Viridian Sailing Centre near Dallas questioned her choice of rig given the light air, but was convinced to wait until the morning to make up her mind.
That proved to be the right decision, as Day 2 dawned cloudy, rainy and windy! The breeze ranged from 12-22+ knots, allowing the RC to set 4 Harry Anderson courses that tested sailors on all points of sail. In Race 3, Ash Beatty of Texas came barreling out of the left to round the top mark first, with Bob Hodges and Marc Jacobi right on his tail. The RS Aero 7s were in their element, taking 7 of the top 10 corrected positions in the race.
This proved to be a consistent pattern, with Welsh and Saurage sharing bullets with Jacobi in the day's races. In Race 6, Welsh and Jacobi's corrected times were tied out to 100th of a second, with Welsh ultimately coming out on top - exciting stuff! Going into the final day of racing, Jacobi was on top by 1 point over Welsh, with Saurage 3 more points back.
A buffet of gumbo, jambalaya and salad was enjoyed by the sailors apres sailing, with lots of discussion about the weather for Sunday. The forecast was calling for fresh winds with possible thunderstorms, so the RC moved the start time earlier in hopes of getting a race or two in before the bad stuff came through.
As predicted, there was plenty of breeze at the club Sunday morning. Sailors optimistically rigged up, noting the imposing bank of clouds rapidly closing in from the Southwest. The RC postponed ashore for an hour until the radar made the unavoidable point: it was going to get nasty, soon. Sailors scrambled to get boats derigged and onto trailers, most succeeding before *heavy* rain started just before the award ceremony.
In the RS Aero 5s, CC Griffith came out on top. In the RS Aero 7s, Ricky Welsh, Hank Saurage and Former BWYC Commodore Eugene Schmidt comprised the Top 3, with Marc Jacobi, Bob Hodges and Bob Patterson leading the RS Aero 9s. Overall, Jacobi squeaked ahead of Welsh for the win, with Saurage in 3rd. Rounding out the Top 5 were Eugene Schmidt in 4th and Paul Perry from Davis Island YC (FL) in 5th. Top Junior: Chandler Taloney (6th Overall), Top Woman: Anne Kochendorfer (18th), Furthest traveled: Akira Tanaka (2000 miles driven, from Los Angeles!).
Ricky Welsh (2nd), Chandler Taloney (6th), Bob Hodges (7th) and Nate Hartwell (12th) admirably carried the torch for the newbies. A large contingent of sailors from Viridian Sailing near Dallas TX came for the first of hopefully many away regattas, enjoying the expanse of a larger body of water.
Bay Waveland YC put on a great event. The staff and membership were friendly and supportive, and conditions tested sailors in a variety of conditions. It was your scribe's first time sailing in Mississippi, but hopefully not his last!
VIDEO - Light winds on Day 1 before the breeze arrived on Day 2!