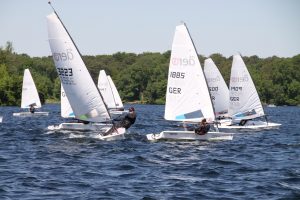 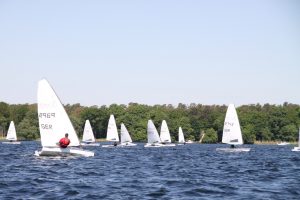 Berlini Cup - Tegeler See, Berlin, Germany, 29/30 May
Thanks to Michelle Krull for her summary report;
Last weekend the Berlini Cup took place at Tegeler See in Berlin. For the first time RS Aeros also sailed, alongside the Europes and Variantas. Despite the still strict Corona measures, 16 RS Aero sailors from the different regions were able to be there and thus even formed the largest starting fleet of the three sailing classes!
The weather was also on our side: with sunshine and partly gusty winds with 10-18kn from N/NW three races took place on Saturday and one race on Sunday. The area is known for its treacherous wind shifters, so that there was also one or two capsizes! Apart from a protest negotiation, the regatta was overall harmonious and the atmosphere was exuberant.

Eric Rieve won the Berlini Cup, followed by Jörn Domres and Michelle Krull on the podium.

We would like to thank the race committee and the many helpers of Segelclub Freia for the organization and implementation.