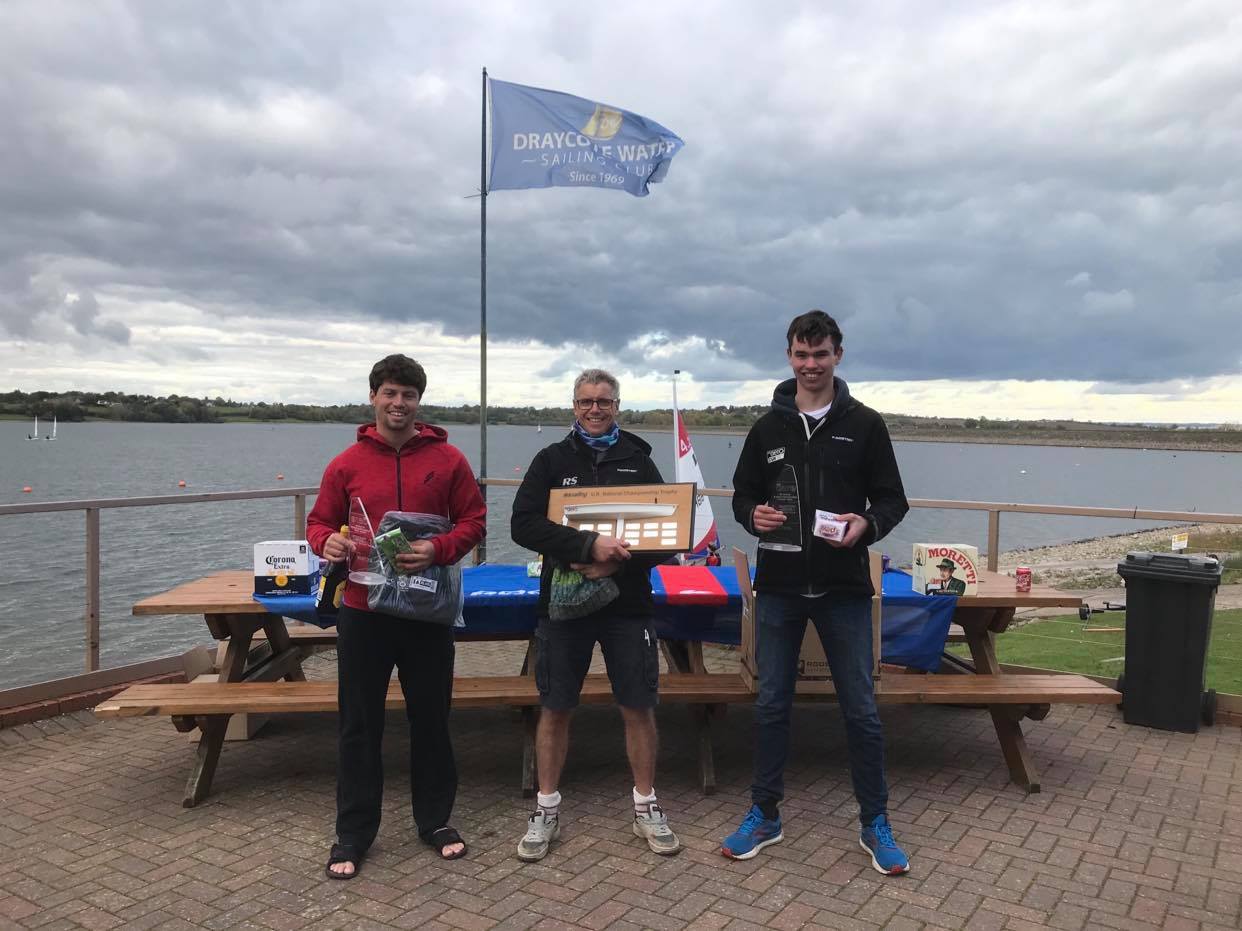 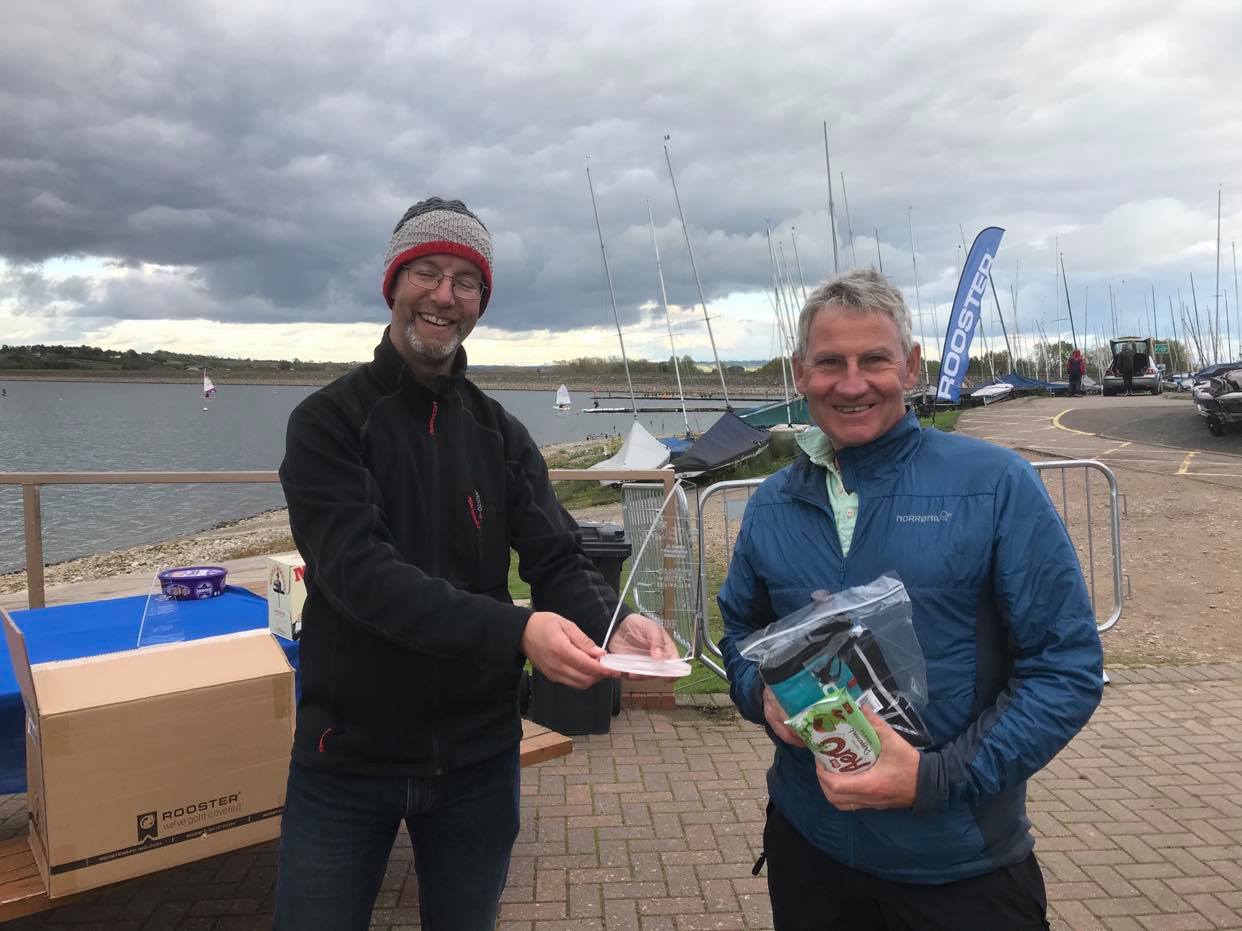 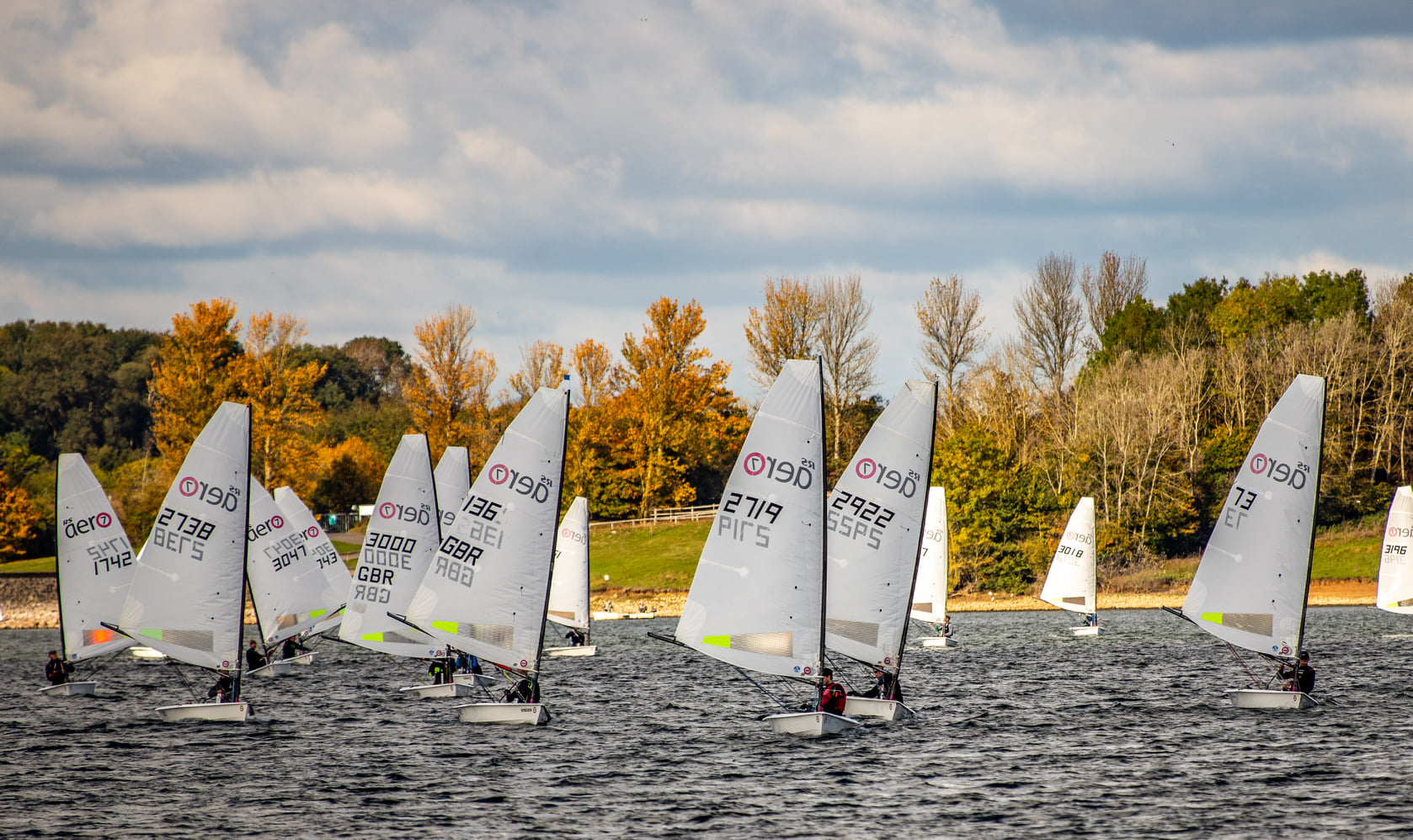 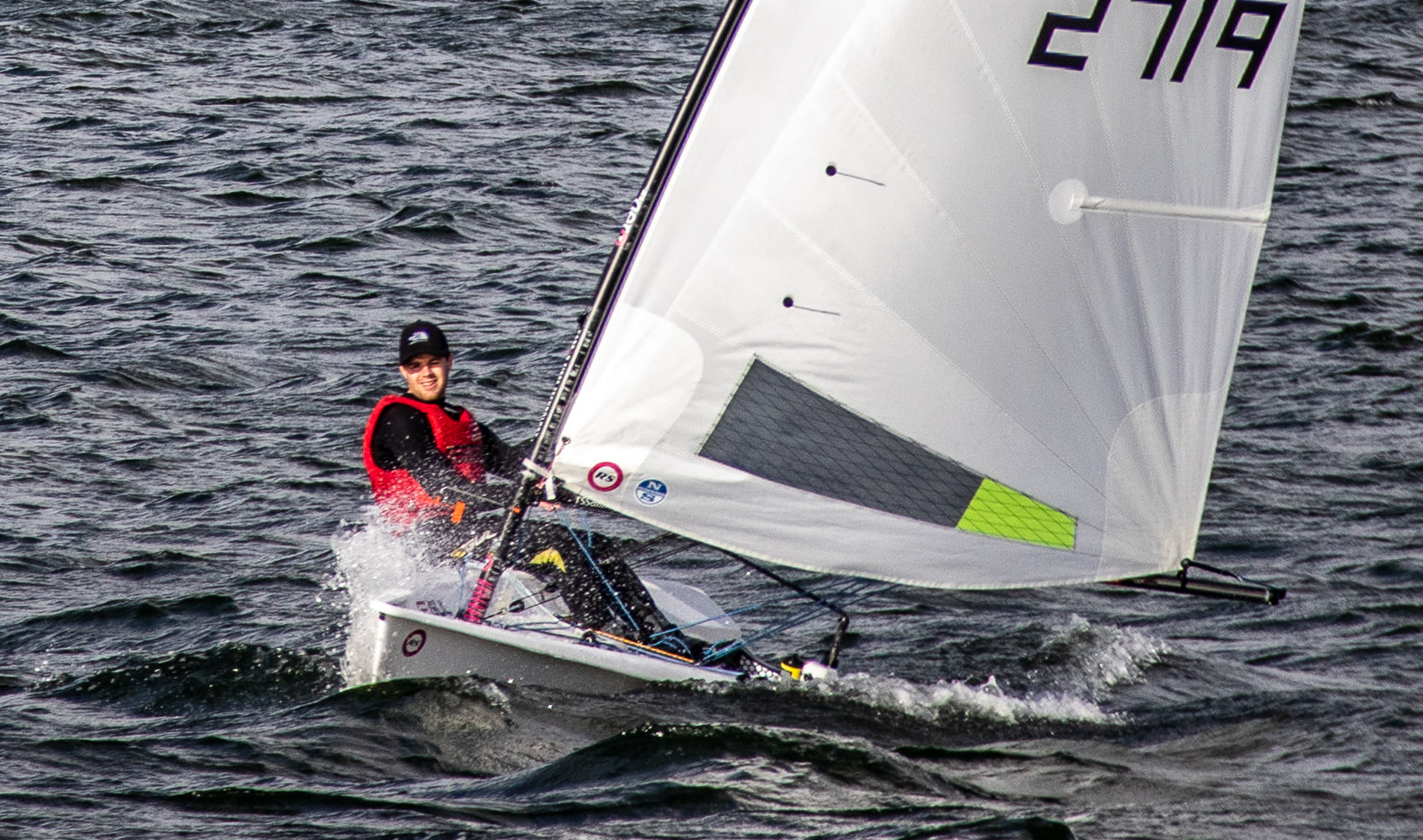 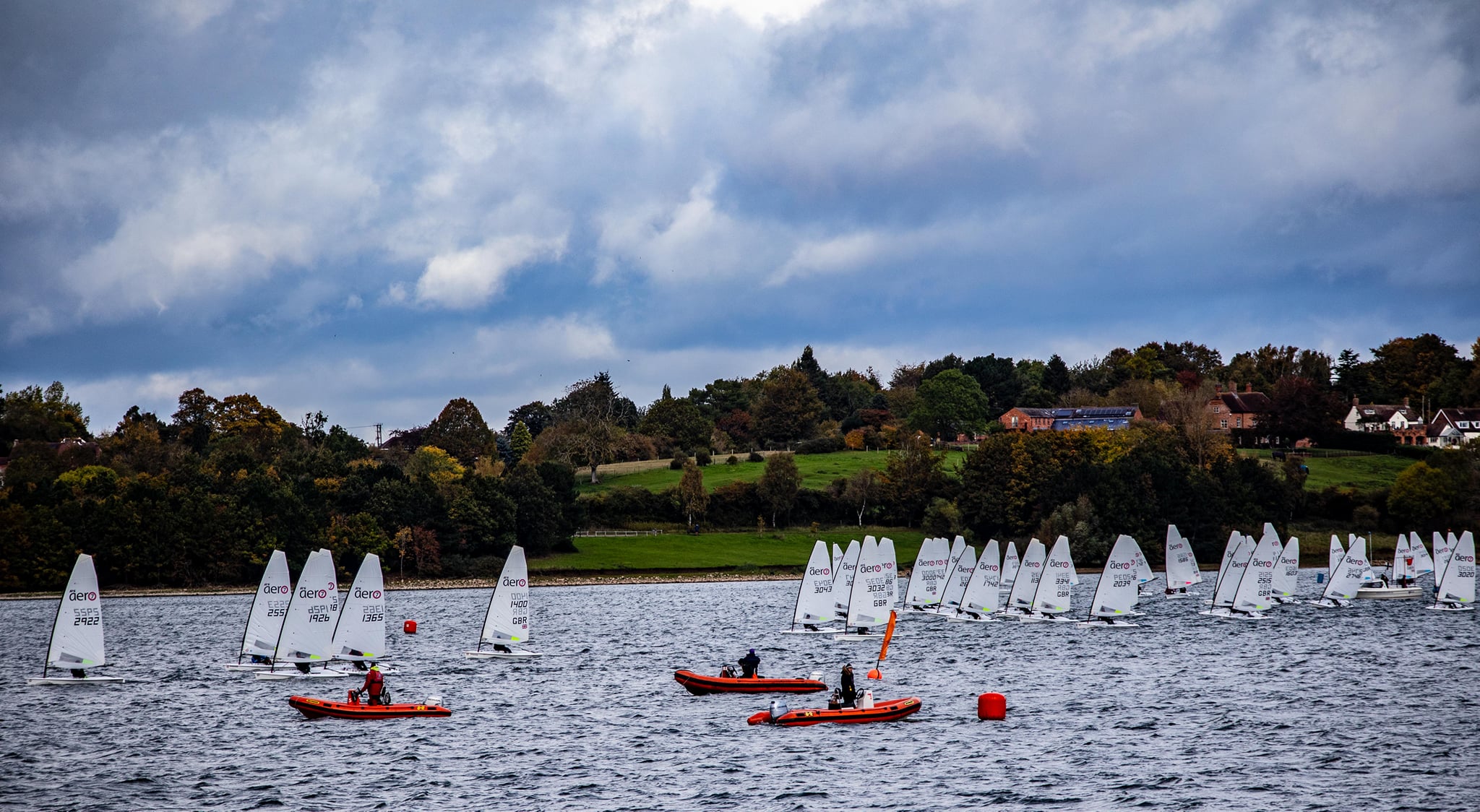 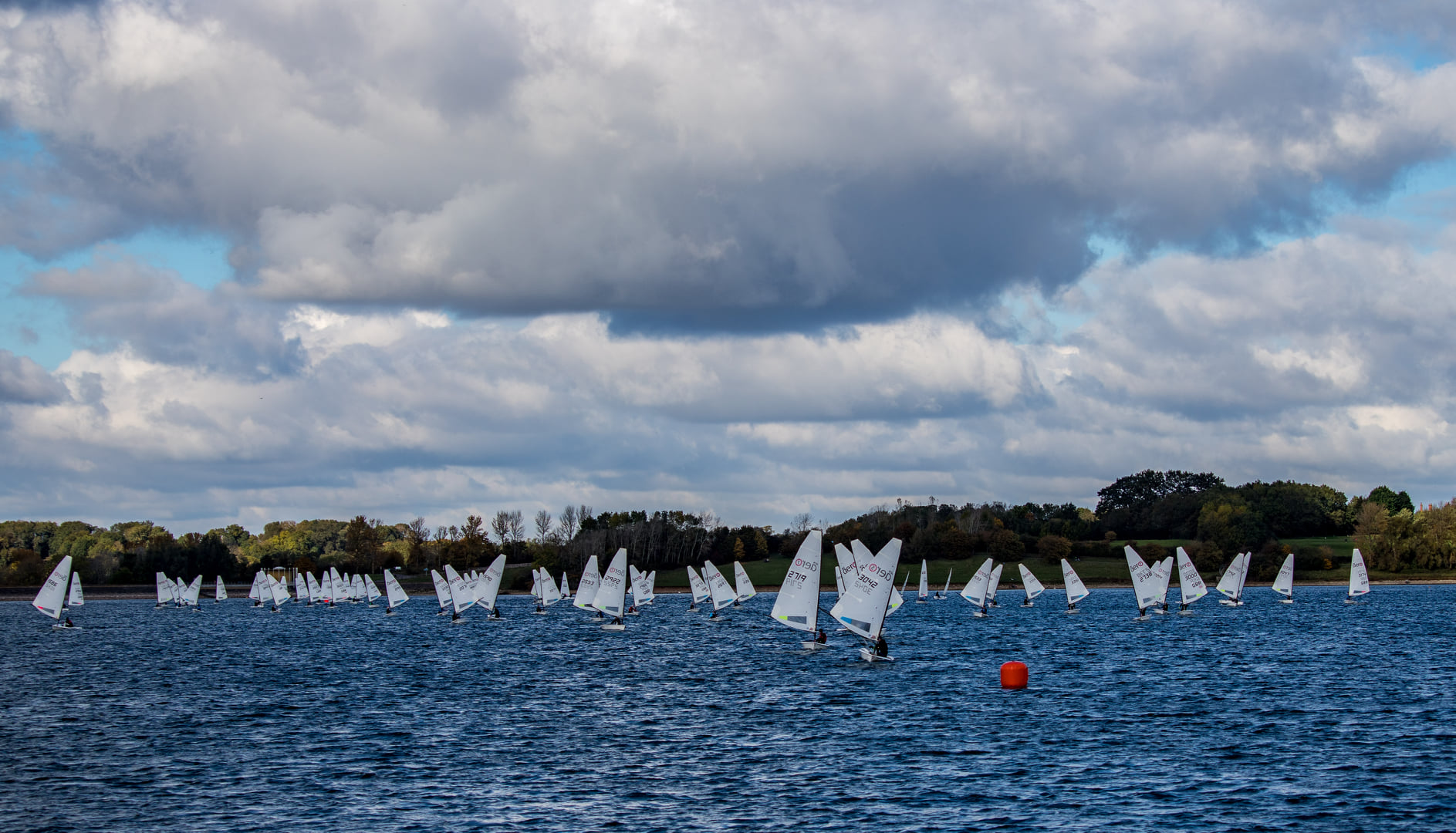 The 26 boat RS Aero 5 fleet saw close racing throughout the weekend, with varying gusts and shifts, meaning that 9 boats got top 3 results over the weekend which created a very close event. A very windy Saturday was dominated by RS Aero 5 National Champion Mike Wood (Draycote Water SC), closely followed by Andrew Frost (Sutton Bingham SC). Mike took 2 bullets, alongside an impressive win from each of Andrew Frost and Tom Ahlheid (Frensham Pond SC). Sunday saw very different conditions, with only around 12 knots of wind, allowing the lighter members of the RS Aero 5 fleet to show their colours. Jonathan Bailey (Grafham Water SC) had the best day, taking 2 wins including a monstrous lead in the 3rd race and 2 3rds. The other two races of the day were taken by Andrew Frost and David Peaty (Draycote Water SC). The final results were very close, with just 4 points separating the top 3 - consistency was key with only one discard form the 8-race series. Jonathan Bailey took the overall win in the RS Aero 5 ahead of Andrew Frost and Mike Wood. First 3 Ladies in the fleet were Abby Hire (RLymSC/LTSC), Alice Lucy (Rutland SC) and Caitlin Atkin (Maidenhead SC) and first Masters were Tim Rush (Notts Country SC) and Gary Walton (Draycote Water SC).

The RS Aero 7 fleet was largest of the weekend with 34 boats competing for the Inland Championships. The windy Saturday was dominated by Noah Rees (Lymington Town) who recorded 3 bullets and 2nd to lead overnight. However, in the light fluky conditions of Sunday, there was much more mixing of the fleet as different sailors got on the right side of some of the large shifts. Notable personal performances included Steph Harding (Hollowell SC) taking a 3rd and Pete Blakey (Draycote Water SC) taking a 12th in the 5th race and Robin Caiger (Bough Beech SC) with an 11th in the final race of the series. Craig Williamson had a consistent Sunday taking 2, 1, 1, 4, taking the overall event win ahead of Noah Rees and Richard Pye (Draycote Water SC). Top Ladies in the 7 fleet were Eleanor Craig (Draycote Water SC), Cathy Partington (Leigh and Lowton SC) in an RS Aero 6 and Steph Harding. Top Masters were John Derbyshire (Emsworth SC), Edward Tuite-Dalton (Draycote Water SC) and David Blaker (Thorpe Bay SC).

The Inlands also doubled as the RS Aero 9 National Championships, with 20 boats contesting for the Nationals title. The windy day one saw the big 9 rig being heavily depowered with large amounts of kicker and downhaul to cope with the pulsating gusts. The flat water of Draycote allowed the 9 rig to fly when off the wind, making the downwinds both fast and fruity! The top 4 of Peter Barton (Lyimgton Town), Tim Hire (RLymYC/LTSC), Greg Bartlett (Starcross YC) and Liam Willis (Lyimgton Town) finished overnight just 3 points apart after a close day of racing. The lighter winds of Sunday allowed for bigger losses and gains to be made and more sailors in the mix at the front, resulting in increased volatility on the scoreboard. One shift on the upwind or gust on the downwind could cost more than 5 places. Perhaps the most consistent were Dominic Hall (Hayling), Chris Larr (Northampton SC) and Chris Hatton (Bowmoor SC). In the final race Dominic took a bullet while notably Phil White (Bowmoor SC) had a blistering race recording a 5th place result, as well as Christopher Abbott (Nottingham SC) sealing a 10th also in the final race, which were best results of the event. Peter Barton took the overall win and RS Aero 9 National Championship, sealed by a magnificent final race in which he managed to claw his way up to 2nd after a disastrous start. He was followed by Tim Hire and Greg Bartlett. Top 3 Masters were David Cherrill (Broadwater SC), Neil Crosby (Bowmoor SC) and Sandy Day (all the way from Loch Lomond SC).

MANY THANKS must go to the team at Draycote Water SC who organised and ran the amazing COVID-friendly event. Thanks to Rooster for their generous support and a special mention to Inge and Richard Pye for organising all the trophies.

JURY DEBRIEF
We are fortunate to have Juror David Battye involved to help keep our racing fairer and enjoyable, whilst helping to educate us as a fleet in the process. David explains the incidents and what to be careful of in your racing;
Day 1 debrief - 3 yellow flags. 10-22kn wind
Day 2 debrief - 5 yellow flags, lighter winds of 6-12kn.
NEXT UP we look forward to similar great racing at Spinnaker SC on 24th October and the RS Aero End of Season Champs hosted by Datchet Water SC on the 7th November. Full details on the RS Aero UK Events List.
PHOTOS
Paul Williamson Gallery
Larger Photos