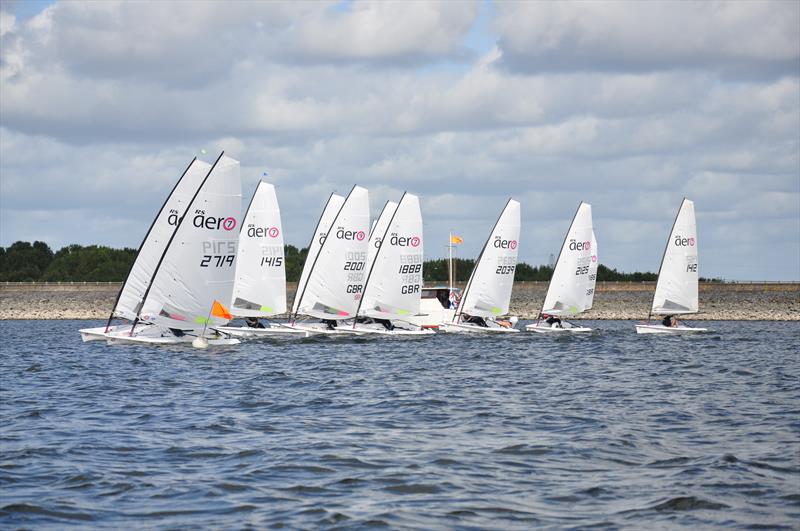 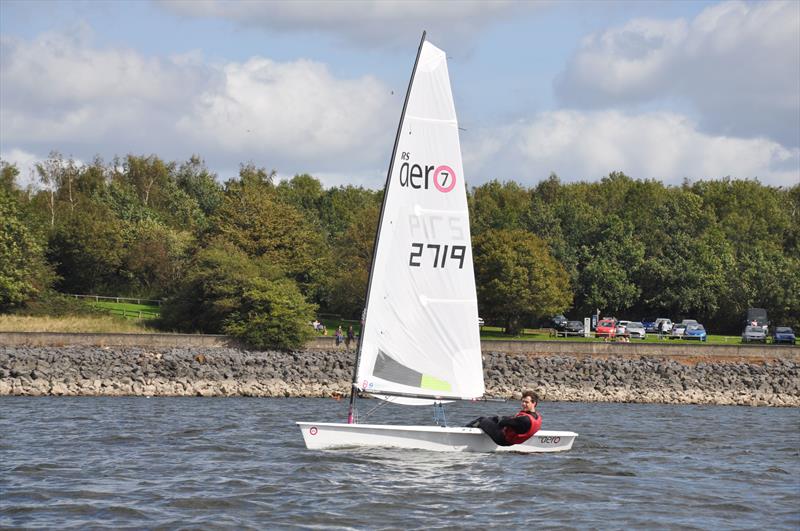 Burton SC RS Aero Open - Foremark Res, Derbyshire, UK, 12 September
Thanks to Burton SC for hosting our RS Aero Open and to Mike Hampton for his report;
Burton SC were privileged to welcome the RS Aero fleet for their first open event at Foremark Reservoir. This was due to be part of the newly formed RS Aero Midland series, but Covid-19 had other plans! Covid-19 restrictions played a part in reducing the entry and also meant that a lot of preparation had to be done by the club to create a safe environment for all to sail.

Nevertheless the 13 entrants, 10 opting for the 7 rig and 3 the 9 rig, were able to experience 4 races on a warm sunny day with a steady westerly wind of around 10 or 11 knots gusting to 16 knots. Judging by the happy smiles at the alfresco lunch and lack of gripes or groans about the course I had set, I was happy to think that everyone was enjoying themselves.

The first race was a trapezoidal course with legs 2 and 4 being reaches, leg 1a beat and 4a run. The well behaved sailors crossed the line smartly with none over the line. First to the windward mark was 3144 Matt Thursfield in his Aero 9. All three 9 rigs lead the first two laps and on the third lap 2891 Chris Larr was able to make good use of a gust which enabled him to steal a clear lead. Starting the final lap 2001 Simon Gayman managed to get teabagged in a windshift and although he recovered without a capsize, it pushed him back, allowing 2719 Craig Williamson in the Aero 7 to get ahead. Craig went on to win the race after handicap calculations and Chris was second.

The course for the second race, whilst similar to the first required some slight adjustments of the marks as the wind shifted slightly left. Unfortunately after the start, the wind continued to move left which meant that the beat and the run became more one sided as the race progressed.

Chris Larr was first around the windward mark, closely followed by the two other 9m rigs. Craig 2719 and Keith Escritt 1065 were very close behind in the 7 rig. All five continued to fight with each other throughout the race. After handicap calculations, Craig once again was the winner with Chris, who had pulled well clear on the water taking second and Keith in third pushing Matt to fourth position. Amy Hopkins 2025 found herself over the line at the start and had to recross the line under the 'P' flag but still managed to pull through a few places and achieve a very creditable finish. Paul Hemmingway 3031 also had problems on the start line which caused him to start the race well behind but managed to make up a few places during the race.

Race 3 started after a relaxing lunch during which the wind picked up slightly and backed a little more to the south-west. Again the course was set to be a trapeze but with some shifting of the marks to achieve a better beat and run with a slightly tighter second reach. During the countdown to the start, the wind backed a little more, making the line port biased which made for an exciting start with most starting at the left hand end of the line but still all sailing on starboard, again the start was all clear. There were plenty of opportunities to make large gains as a series of gusts came through which led to lots of position changes throughout the race. Craig, again took the honours with Keith second and Chris third. Tim Rush 2186 of Notts county had his best race of the day coming a very close fourth.

The last race of the day was to be 5 laps over what was basically a figure of 8 course. The wind had again increased further and thanks to a shift following the start turned out to be a fun course with effectively one long beat followed by four reaches with a short run thrown in. Tiredness led to a couple of people retiring but for those that stuck it out they were rewarded with some high speed planing. Chris and Simon with their 9m Rigs pulled well clear as you would expect though keeping very close to each other for the whole race. Keith and Craig were again constantly battling between themselves and swapping positions regularly but appeared to be some way behind the two Aero ('s. Interestingly, when the handicapped results were calculated, Chris and Craig were first and second respectively with Simon third and Keith fourth (considering how close the two pairs were, they must have been sailing very well to their handicap to end up with this result).

All in all we had thoroughly enjoyable day's racing. Burton SC would like to thank all of its members for their help in ensuring that this event could happen safely in the current circumstances and to the visiting RS Aero fleet for supporting our event. We hope to see you all again soon.