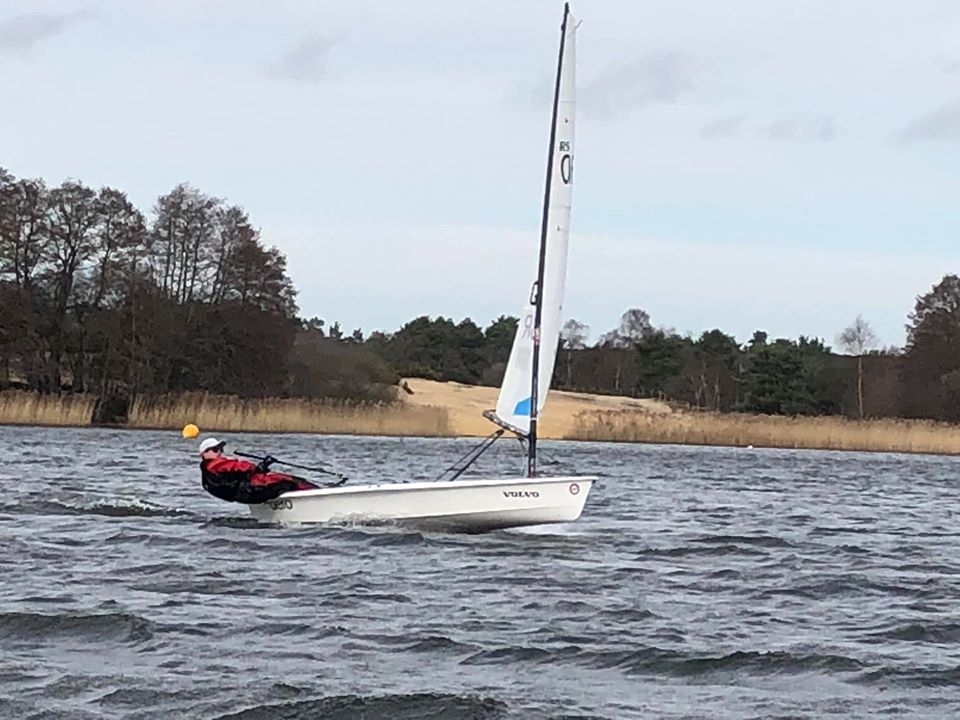 Frensham Frenzy - Surrey, UK, 8th March
Frensham was fully Frenzied this year with 4 seasons coming through in one day with bright sunshine, hail squalls and everything in between! With the Youth Team all away training in Torbay a small task force of just two RS Aeros stepped up to the challenge. We came super close this year after Sammy I-J and Chris Hatton both missed the win by a point last year, but still no cigar!
Event report by Clive Eplett of Frensham;
If all else fails, read the instructions...
After another blustery winter, the Frensham Frenzy again lived up to its name in 2020. The 18 gusting 25kn SW was a calm day compared to recent weekends, but allied to the occasional bright sunny spells, black clouds and vicious rain squalls (or was it hail for a while?) we certainly had some frenzied weather.
The Frenzy comprises 2 pursuit races. PRO Andy Shorrock used the briefing to explain, more than once, how a number display on the back of the committee boat would show the time/number of the upcoming start-whistle. Hence, if your PY gave you a start time of plus 20 minutes, the 60-seconds leading up to your start would show 20. Simples! Any questions? Only those to clarify this point.

Now, as Arthur Dent said in the Hitch-hikers Guide to the Galaxy “It's times like these I wish I’d listened to what my mother told me?” “Why, what did she say?” “I don’t know, I wasn't listening…”
And sure enough, some were not listening. In the first race the 2.4s decided to be generous and start a minute late. But more expensively the two Fevas elected to go a minute early, resulting in an OCS. This was particularly disastrous for last year’s winner Tom Ahlheid, this year crewed Finlay Lomas-Clarke, because the two were absolutely flying around the pond, building a lead far in excess of that one-minute pinched when they started.

However, top sailors rise to a challenge and FPSC Sailing Sec Ian Gregory, sailing his Laser (or is it an ILCA? Or something else again this week?) Radial to great effect, nevertheless ground the lads down, catching them just before the finish. In doing so, he also kept behind Peter Barton in his RS Aero 7, Katrina Gilbert/Jenny Rust in a RS200 (who both then disappeared off to play hockey in the afternoon. Tut-tut) and Megan Ferguson/Ben Harris in a 420. It was good to see four Larks on the pond with the next two places taken by Steve Cumley/Eluned Stewart followed by Nigel Hufton/Pete Nicholson. A shout out here also goes to Sarah Cockerill, for (literally?) hanging in there for a seriously windy race in a RS400 with non-functioning jib-sheet cleats. “Do you know a decent chandler?” I asked. We’ll skip the response, I think. Unsurprisingly, Steve was more in evidence with head in boat and screwdriver in hand than in the clubhouse at lunchtime though...
After a good lunch (for everyone else) in a buzzing atmosphere, it was time to don many more clothing layers and go again. This time, the RS Fevas had actually worked out the starting instructions. After a lap or so Tom and Finlay got past father and son Richard and Tristan Harding in the other Feva and again shot off into a substantial lead, this time never to be caught.
Meantime, Ian was having his work cut out for ascendancy in the Radials, with much inter-changing of places between him and Charlotte Videlo (now returned from a blown off qualifier at Weymouth) before both were overhauled by Peter in the RS Aero 7. Again rising to a challenge, Ian ultimately worked his way ahead of Charlotte at the finish. Next, Nigel and Pete this time came out on top of the Larks with your correspondent Clive Eplett in his 'if-only-the-*****-stick-would-stay-pointing-upwards-RS100' coming between them and Steve/Eluned .
All this meant Ian Gregory (despite a capsize on a 50 degree-header-gust in race 2; perhaps he is human after all) came out as winner of the 2020 Frensham Frenzy on equal points to Peter Barton but winning on count-back. Nigel/Pete and Steve/Eluned were third and fourth respectively, Megan/Ben fifth and somehow Clive sixth after a hard day battling, or more likely just providing (spectacular? comedic?) entertainment to Simon Bond, seventh in a Phantom.
Thanks go to Andy Shorrocks for running two great races and all support crews braving the weather. They were busy at times. As ever, the Frensham after sailing Tea & Cakes were something to behold!
Next year the Frenzy will again be the Sunday after the Dinghy Show, so please put 7th March 2021 in your diaries.