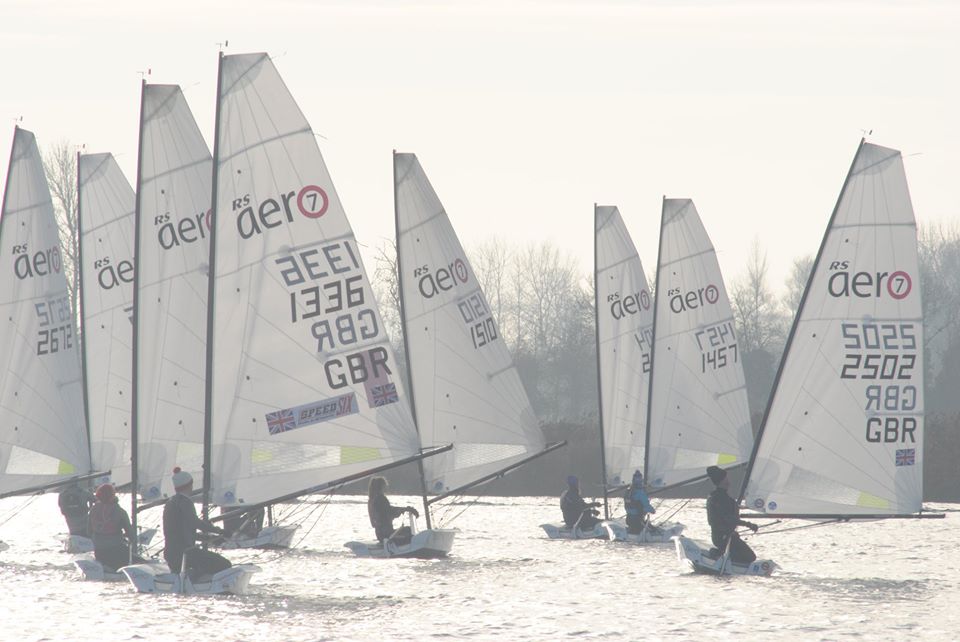 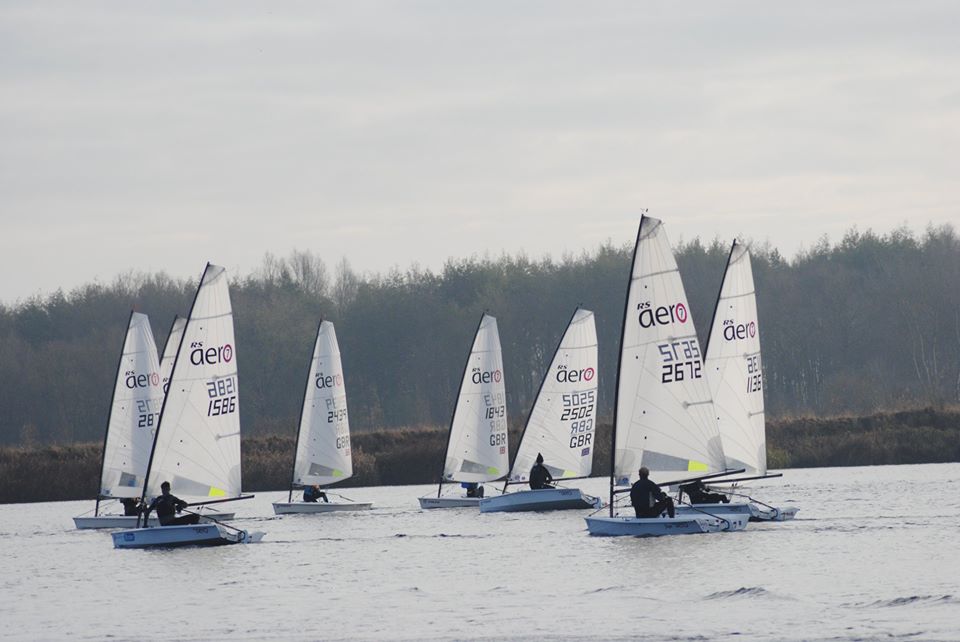 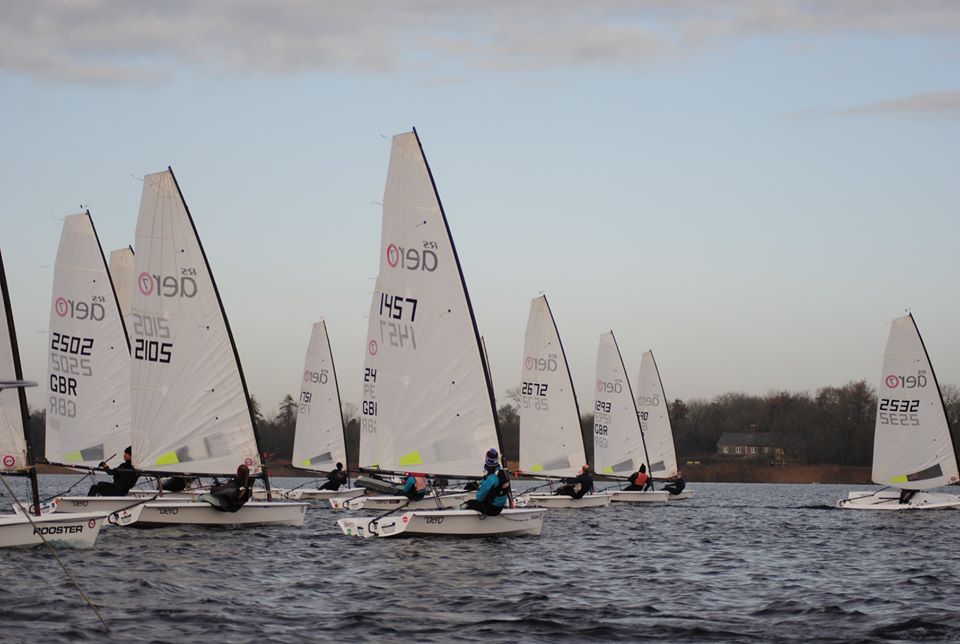 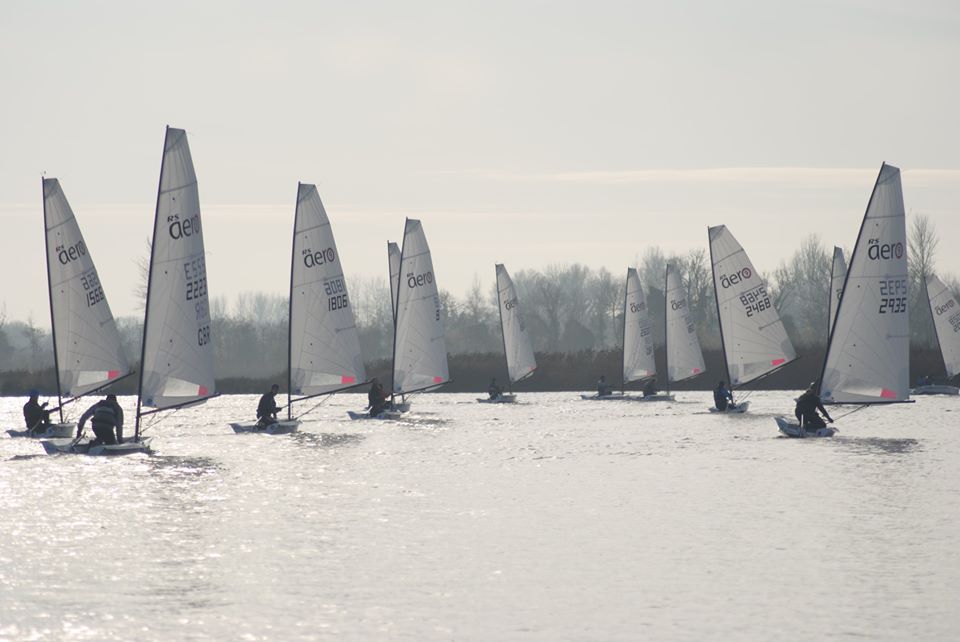 The Bowmoor Bubble - Bowmoor SC, Gloucestershire, UK, 30th November
A crisp winter’s morning greeted 37 RS Aero sailors at this year’s Bowmoor Bubble. By race time the morning fog had dispersed leaving a sunny day with a fresh medium breeze, enough to hike hard but without getting too splashed - perfect for a chilly day!

A full schedule of four races split by a nice lunch break provided excellent late season racing and intense competition with the super on form Bowmoor fleet. The Bubble also counted as the final event of this year’s the RS Aero Thames Valley Mini Series and the first event of the RS Aero UK Winter Series.

RS Aero 9 - by Tim Hire
A frigid November’s morning brought close and competitive racing for the RS Aero 9 fleet for the Bowmoor Bubble. The cosy Cotswold club is home to the second largest RS Aero fleet in the country, and with 9 Bowmoor boats out of the 14 that made up the RS Aero 9 fleet, the local turnout did not disappoint.

The shifty and gusty conditions presented to all the competitors made good tactics on the course vital to achieve a good result. Race 1 saw Peter Barton (Lymington Town SC) take a quick lead ahead of Greg Bartlett (Starcross YC), however, the pair were unable to prevent the charging Dave Lynall (Bowmoor SC) from taking the win.

Race 2 brought similar conditions but a slightly different course for the competitors to work out - the lead boat proved to be very useful! Once again, after a less-than-perfect start and first beat, Dave Lynall pulled through the fleet to end the morning’s racing with two bullets, followed by Chris Jenkins (Bowmoor SC).

After a short break for lovely warm lunch, it was time for the final two races of the day to commence. The wind picked up slightly during the lunch break, giving all the competitors an opportunity to do some hiking to stay warm! Al Keck (Bowmoor SC) led the first half of the race before Tim Hire (RLymYC) made a pass before the downwind of the penultimate lap. Once again Dave Lynall sailed a stellar second half of the race, ending up second ahead of Peter Barton and Al Keck.

The final race saw drama on the start as both Peter Barton and Greg Bartlett were over, giving more opportunities to the rest of the field. In the end, Dave Lynall proved that he was the man to beat taking the final race and the series. The final results were Dave Lynall followed by Tim Hire, Al Keck, Peter Barton and Chris Jenkins (top 5). A special mention must go to Phil White (Bowmoor SC) for a fantastic birthday cake!


RS Aero 7 - by Charlie Sansom
In the 22 strong fleet of RS Aero 7's, there was close racing all day, with never more than 100m between the majority of the fleet, and 8 different sailors achieving a top 3 result! In the first of four races, local sailor Chris Hatton asserted himself over the fleet, pulling out a two leg lead while the rest of the fleet tussled behind, with less than 30 seconds between second and tenth place. It was eventually traveller Chris Jones who pulled into second, followed by local youth Matt Banbrook. The second race saw Chris H once again shoot off into the distance, while the rest of the fleet tried to work out who had been U flagged. Eventually Charlie Sansom pulled past Lily Barrett to take second and third respectively.

After a warming lunch and a quick turn around, Race 3 got underway. It was a similar story with Chris H leading from start to finish, but behind there were more new faces in the top 3, with local lady Rachael Jenkins pulling off a second just in front of Harry Joyce. By this point, Chris H had won the day and he took a relaxed approach to start four. This opened up the possibility of a first for one of the 5 boats in the running for a second place. After a very close two lap race, it was Charlie who pulled out in front of Will Gifford in second and Harry in third. Overall it was Chris H in first, Charlie in second, Harry in third, Chris J in fourth, and Noah Rees in fifth. The first lady was Lily Barrett, and first youth Chris Hatton followed by Matt Banbrook in second Youth.

Next Up for UK RS Aeros is this weekend’s Datchet Flyer with 10 RS Aeros competing whilst another 32 Young RS Aero sailors train at Rutland SC. Saturday 14th sees festive cheer at the Lymington RS Aero Christmas Stadium Racing followed by lunch and Carlos’ seasonal historic tour of the smugglers and villains of Lymington’s cobbles into the evening. Over New Year 25 British RS Aeros sailors will make the trip downunder for the 3rd RS Aero World Championship at Melbourne, Australia, and will be pleased to enjoy competing in the antipodean summer!
RS Aero UK Events List 2020