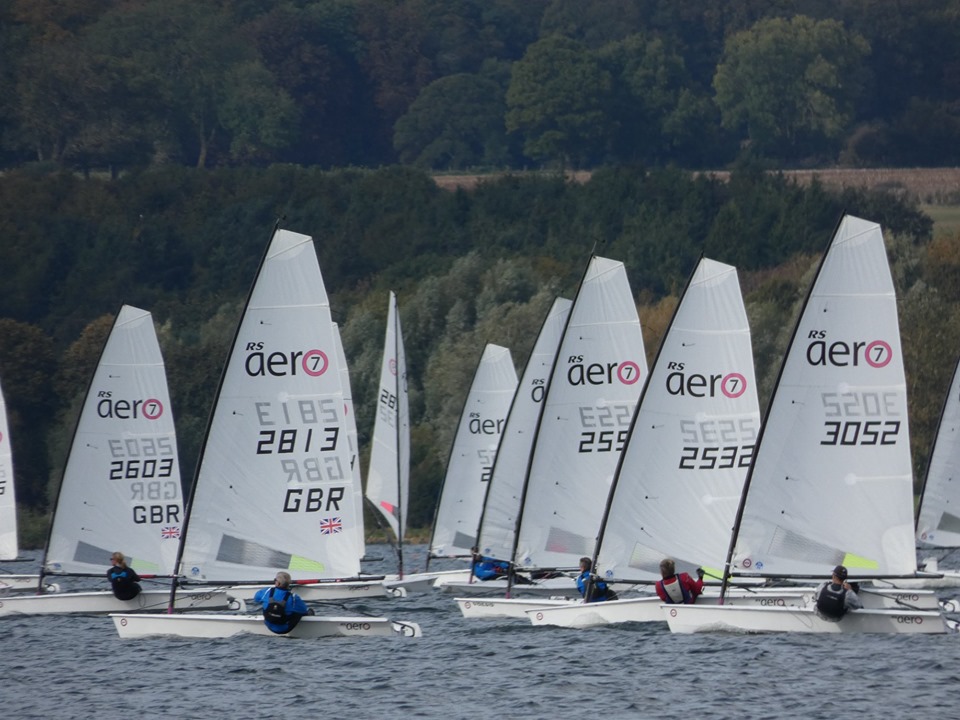 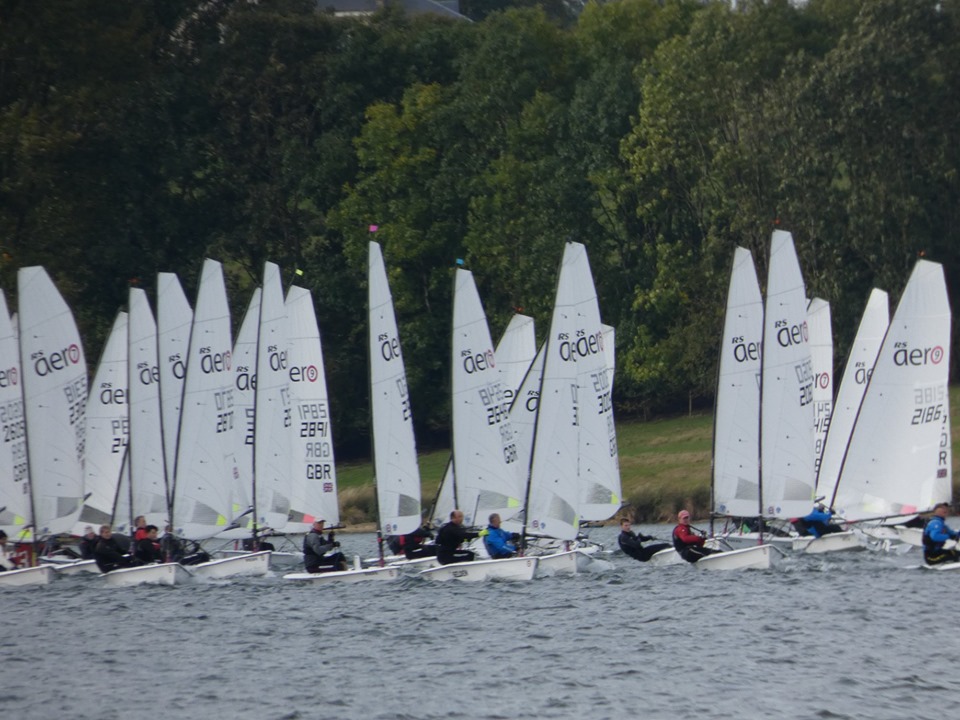 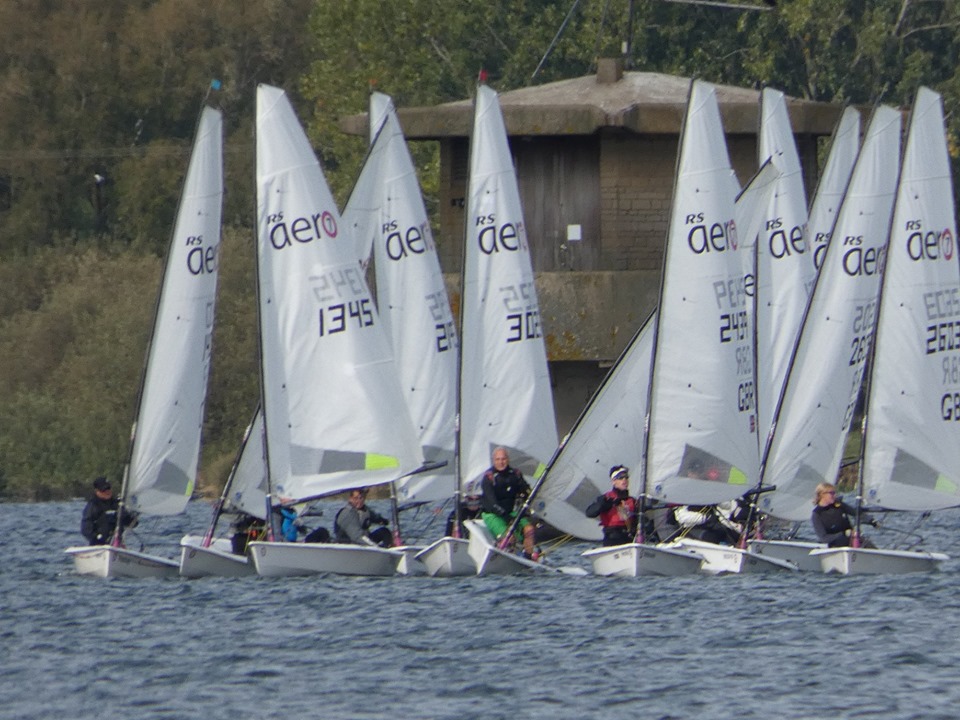 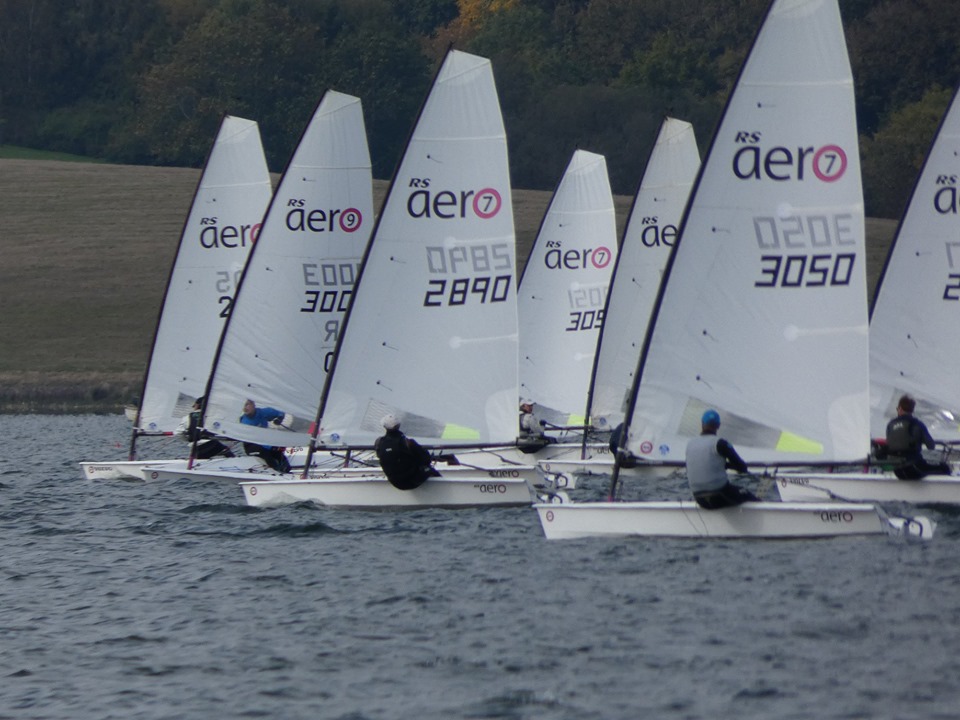 79 RS Aeros made the RS Aero UK Inland Champs at Rutland SC the largest weekend RS Aero event yet as the Class continues to grow. Medium breezes prevailed over the weekend and the three RS Aero fleets raced off Class starts with inner and outer loop courses spreading competitors across the lake.

Ben Rolfe (Burghfield) was on top form on Day 1 in his RS Aero 9, winning all four races from Chris Larr (Northampton) and Alan Beaton (Notts County) taking the 2nds.

In the RS Aero 5s Jonathan Bailey (Grafham) and David Ellis (Lymington Town) were enjoying a tight tussle for supremacy whilst Sam Blaker (Benfleet), Fergus Pye (Draycote) and Theo Deverell (Hunts) also had a look in at the front during the day.

The RS Aero 7s had a whopping 57 boats on the start line with super tight racing throughout the fleet in the medium breeze. As ever, clear air and the canny knack of catching Rutland’s gust lines and lifted tacks were super critical as the racetrack challenged all the sailors. Noah Rees proved to be a consistent fleet leader with a 1,2,1 before a blot on his series after leading the fleet into a navigational error in Race 4. The challenge in the large equally matched fleet was consistency and anyone with string of top 10 results was in the running for the top spots going into the second day.

Sunday’s forecast was for new weather to arrive with a 180’ wind change set to happen around midday. Under challengingly unstable conditions one race was possible before the fleet returned ashore.

With a packed out start line and flicking breeze it was all on in the RS Aero 7s – and ultimately the weekend was perhaps lost rather than won! Two boats were over early at the port end who happened to be the series leaders Noah and Mark Riddington (Emsworth) who would have needed just a 15th and 8th respectively to claim the title. Harry Joyce (Bowmoor) was looking good to pick up the pieces, comfortably within the top 5 that he needed until he lost a couple on the final approach to the finish. Peter Barton led the fleet home in the tricky final race followed by Keith Escritt (Yorkshire Dales) and Chris Hatton (Bowmoor). With the regatta proving high scoring this was just enough for Peter to take the title on a tie break from Harry. Mark was 3rd and Keith 4th, with the top 4 split by only 2 points! All the lead contenders were left musing the ‘what if…’ of where they could have saved a few points over the weekend to take the title that had proven to be wide open!

Thanks to Class sponsors Rooster and Noble Marine for their continued generous support and the excellent spread of prizes for both the Inlands and also the UK Northern Series of 2019 that was also awarded at Rutland. Thanks to Rutland SC for being wonderful hosts as ever, providing some great racing on a testing weekend.

Next up for the RS Aeros in the UK is the End of Season Championship were the fleet visits the growing RS Aero fleet at Draycoye Water SC on the 9/10th November. The Class is fortunate to have National Juror, David Battye, in attendance at Draycote who will assist the Class and especially those preparing for the upcoming World Championships in Australia over New Year. The RS Aero Winter Series then starts at the Bowmoor Bubble 30th November. Full details of all UK RS Aero events can be found HERE.
LARGER PHOTOS by Alan Hatton
FULL FACEBOOK ALBUM