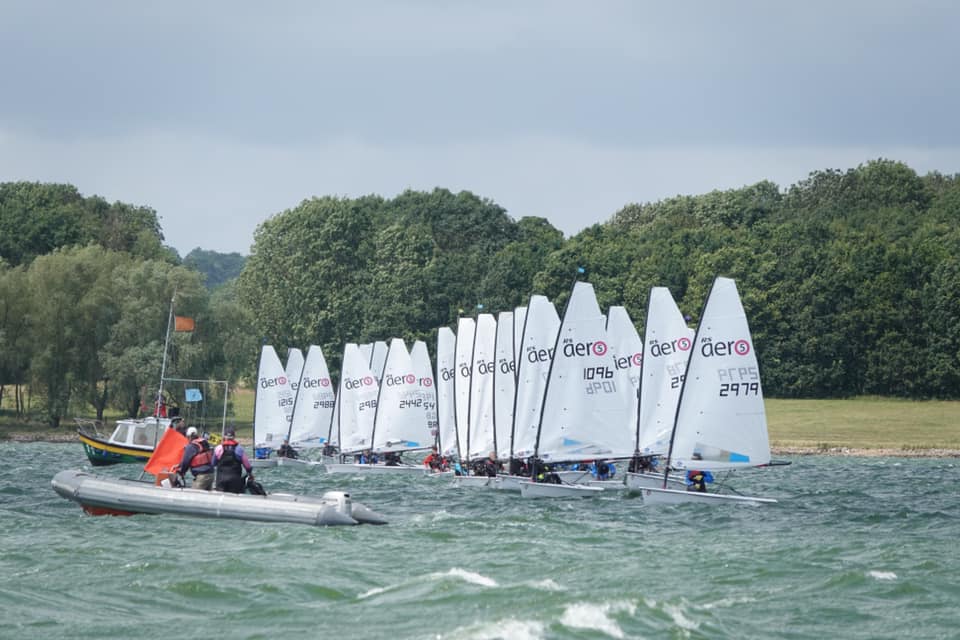 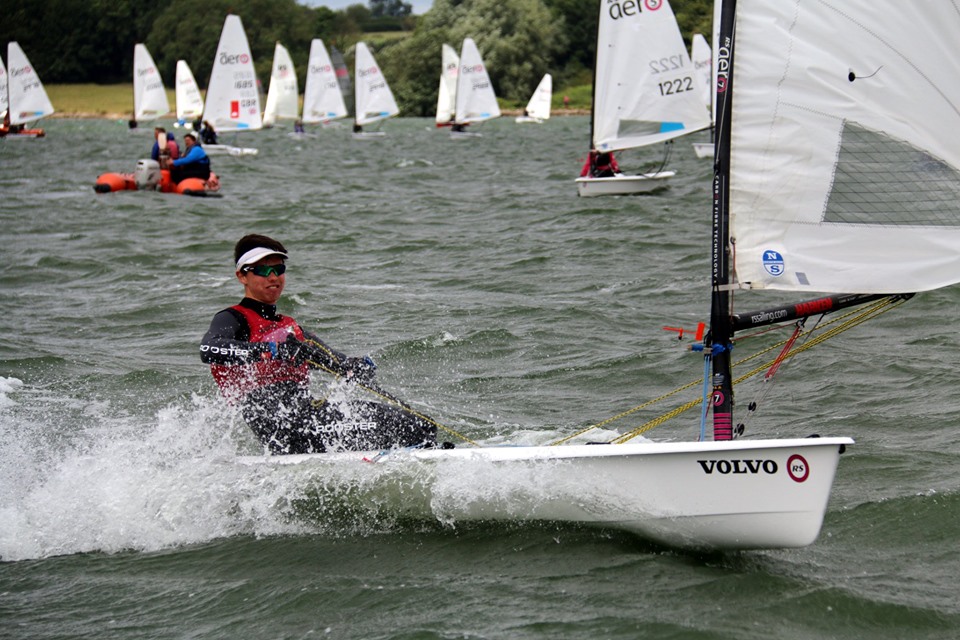 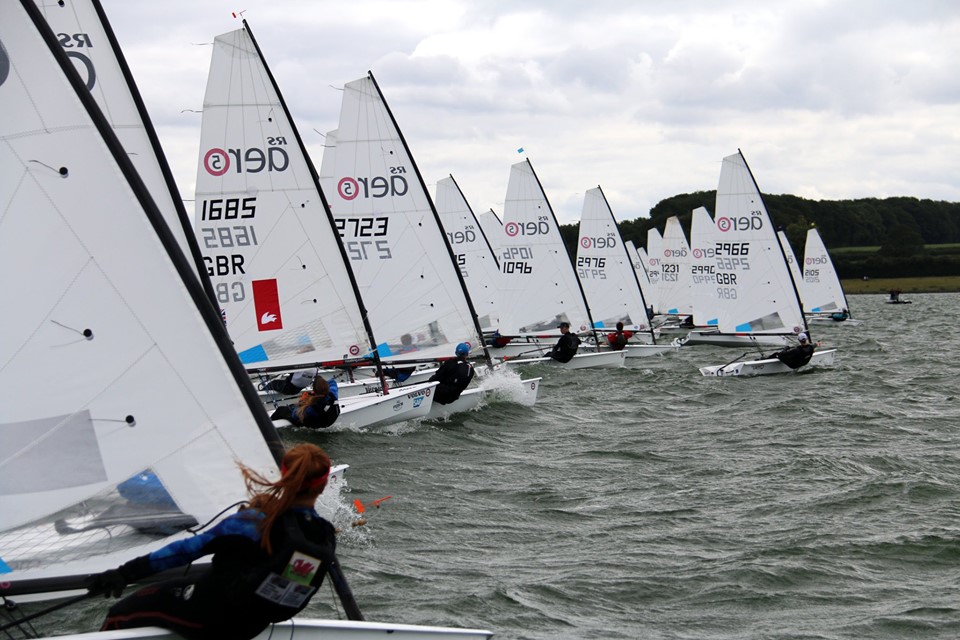 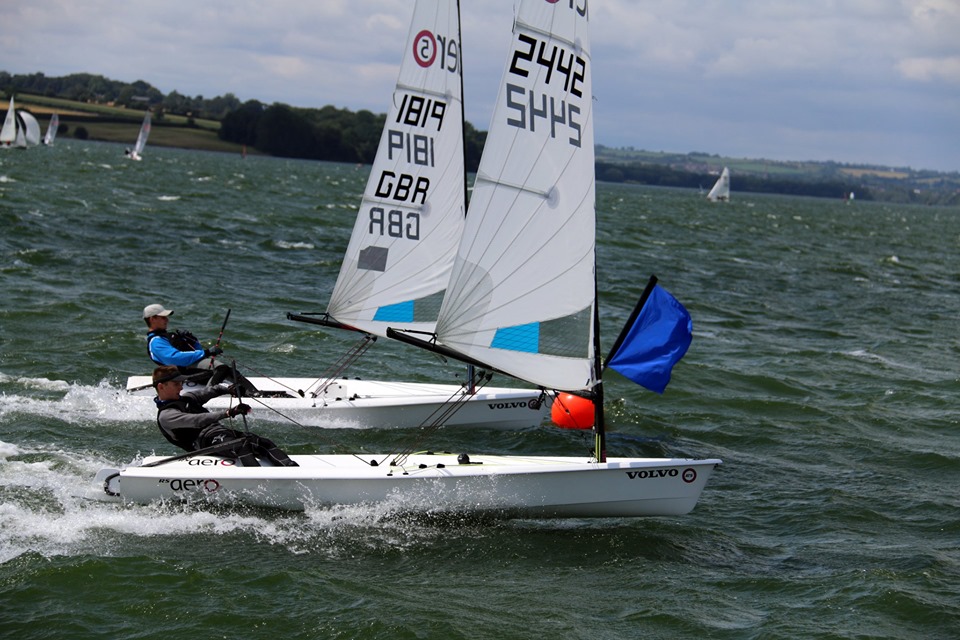 RS Aero UK Youth Championships - Rutland, UK, 20/21 July
50 young RS Aero sailors at Rutland for the UK Youth Champs with a near 50:50 split between girls and boys!
The RS Aero 5 fleet was the second biggest ever with 40 after last year's Worlds. The smaller RS Aero 7 fleet was equally stacked with talent.

A day's initiation and refresher training on the Friday allowed new young RS Aero owners and the 12 strong Charter fleet provided by RS Sailing to get up to speed quickly. A fresh breeze and the occasional squall gave an exciting day on Saturday. On Sunday conditions were lighter providing a good mix over the weekend and a few new faces near the front.

Day One
Big Saturday! Today we had 4 fantastic races with a fabulous breeze of 11-25 knots throughout the day.
The huge 40 boat RS Aero 5 fleet got underway first with an “All Clear” start. 1st to the windward mark was William Caiger (Sevenoaks School). Closely behind was Coco Barrett (Island Barn) and Iona Willows (Dorchester SC) who also made the most of the huge shifts up the beat. As the race progressed William extended his lead further securing 1st and Coco held on to 2nd place while Matthew Taylor (Brightingsea) took third.
Meanwhile the smaller RS Aero 7 fleet had a very close race one with Tim Hire (Lymington) leading the race throughout, but Jack Miller (Felpham) was close behind battling it out with Noah Rees (Torpoint/Cawsand) & Ned Stattersfield (Wells) for 2nd position. With overtakes occurring on the last run down to the finish Tim Hire held on and Jack Miller was able to secure 2nd place with Noah Rees in 3rd.
After a very quick turnaround race 2 was underway. The chop had picked up and the spray on the press boat was intense! An extra lap was added for both fleets. The first beat was very shifty and played well by Coco Barrett and William Caiger. After two laps the 5s headed for the finish line not realising the change to 3 laps during the break! Iona Willows held her own and secured 1st position with Jonathan Bailey and Ben Millard (Emsworth) not far behind.
The RS Aero 7s got off to another intense race with boats switching places the whole way up the 1st beat. Noah Rees was off to a good start but Tim Hire was close on his tail. As the race progressed. Noah let speedy Tim ahead to give him another bullet. Chris Hatton (Bowmoor) pulled through and secured a 3rd.
Race 3 for the RS Aero 5 class was led again by William Caiger. 2nd and 3rd were secured by 2 new sailors Ewan McAnally (Rutland) and Harrison Pye (Draycote). For the RS Aero 7 it was the same story as race 2 with Tim Hire 1st, Noah Rees 2nd and Chris Hatton 3rd.
After a 30 degree wind shift, the course was quickly adjusted in time for the final race for the 5 rigs which again was won by William Caiger, with Coco Barrett in 2nd and new sailor to the top 3 Curtis McKay (Queensmead)! In the RS Aero 7s Tim Hire secured his 4th bullet, Noah Rees 2nd and Roscoe Martin (Ogston) 3r

Day Two
After a windy Saturday we had many tired Youth RS Aero Sailors. Everyone was certainly looking forward to the lighter conditions ahead of them. Despite the tired legs we had a fantastic evening with a great BBQ Social.

Many sailors were nervous due to the one discard from the 8 races series making consistency the key to success. Saturday’s leader William Caiger gained an unfortunate U Flag penalty leaving him counting a bad score.

Sunday’s wind speeds of a lighter 7-15 knots made it challenging for some. The RS Aero 7s saw new race winners Noah Rees and Chris Hatton. With a close few races it looked like Noah Rees was going to overtake Tim overall but Tim was able to hold his own and win the UK Youth National Championships. A delighted Tim commented; “It was a game of two halves! The strong winds of Saturday provided fruity racing when compared to the seemingly docile but shifty Sunday. Great to see so many new faces enjoying our boat!”

With the challenging conditions big gains and losses were apparent across both fleets highlighting the benefit of consistency. In the lighter breeze really Jonathan Bailey excelled after a consistent Saturday and was able to add two bullets moving him into 1st overall to win the RS Aero 5 UK Youth Nationals. Coco Barrett also had a consistent day moving up into 2nd overall and first female sailor!

Overall it was a fantastic weekend with the 50 young sailors enjoying a challenging and fun weekend. We look forward to next year! Thanks to Rutland for being excellent hosts, to Harken & Rooster for the generous prize haul, RS Sailing for supporting the event with the charter fleet and Team Rolfe for providing the trophies.

Next up for the British fleet is the RS Aero UK Nationals starting this week at East Lothian YC, Scotland followed by the journey south to Lake Garda in August for the RS Aero Europeans.
PHOTOS