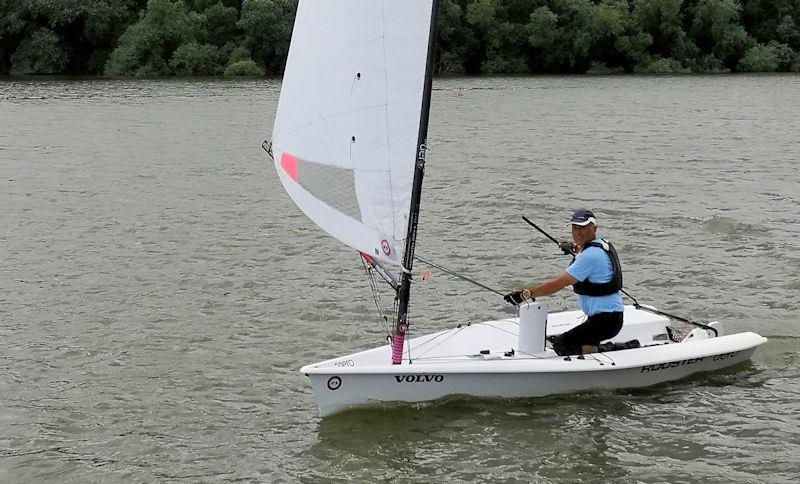 Sutton Bingham RS Aero Open Meeting, Yeovil, Somerset, UK
Thanks to Tim Hire for his account of a hot day out at Sutton Bingham;
Sutton Bingham RS Aero open was held under clear blue skies with 7-10 knots of south easterly breeze. Luckily the very light wind forecast was not accurate, and the four RS Aero 9s and RS Aero 7 that arrived were greeted with a beautiful breeze to counteract the searing heat.
As with many inland venues, the wind was always unpredictable, with shifts and gusts creating tight racing. One shift was often the difference between a position, forcing everybody to be constantly on their toes. Places changed many times during the first race before Chris Jones in the RS Aero 9 took the first win of the day. After a blistering last lap, Elliot Toms in the RS Aero 7 managed to catch up and overtake the RS Aero 9 of Mark Lambdin.

Race 2 saw a small change to the course to make it a windward-leeward, allowing for more tactical sailing on the downwind leg. By now, the competitors were beginning to get used to the constantly changing conditions. Tim Hire took the win ahead of Chris Jones, while Mark Lambdin beat Mike Riley in the battle for third with Elliot Toms just behind.

An amazing lunch served by the galley prepared the competitors for the three races in the afternoon, which were just as entertaining and close as those of the morning.

Race 3 saw a change to the location of the course, as the sea breeze started to kick in from the south. An amazing start and first beat by Eilliot Toms in the RS Aero 7 saw him engage in an exhilarating fight with the RS Aero 9s of Mark Lambdin and Mike Riley, seeing Elliot finish third on the water and only 42 seconds behind the RS Aero 9s of Tim Hire and Chris Jones when corrected on handicap.

The wind remained reasonably constant for the fourth race of the day allowing for close racing before Tim Hire took the win. The wind for the final race was very difficult for the race officer, as it shifted back to the morning's direction. In the tricky conditions, Chris Jones took his second win ahead of Tim Hire.

The results after handicap were: Tim Hire ahead of Chris Jones, with Elliot Toms third overall and 1st RS Aero 7, Mark was fourth and Mike was fifth. On behalf of all the competitors I would like to thank Chris Jones and everybody else who were responsible for the organising of the event at Sutton Bingham SC, all the volunteers who are vital for the event to be able to take place.