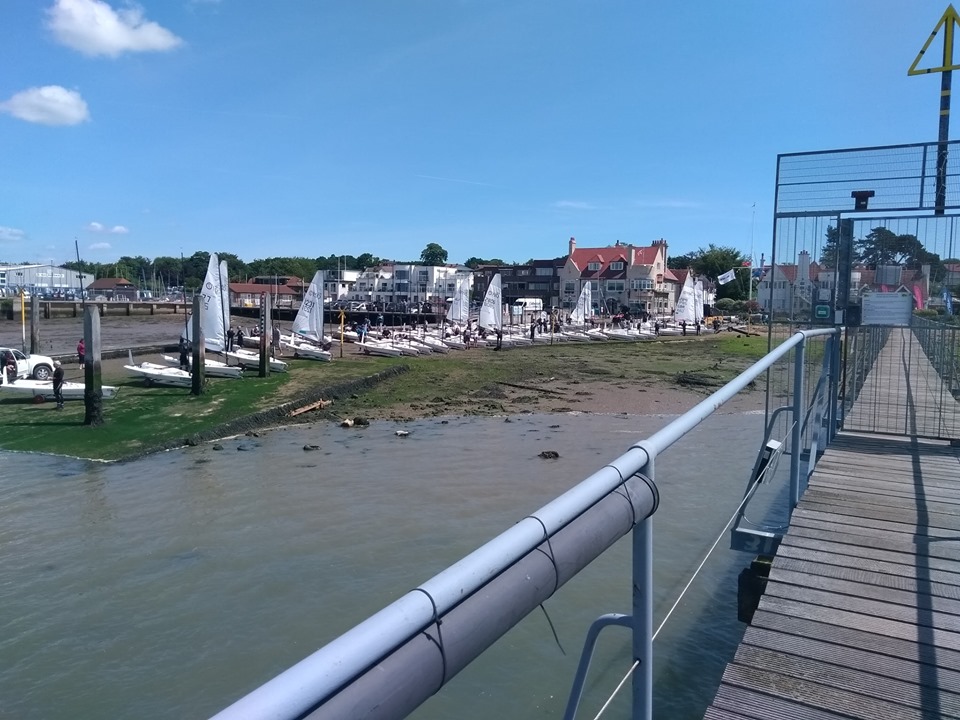 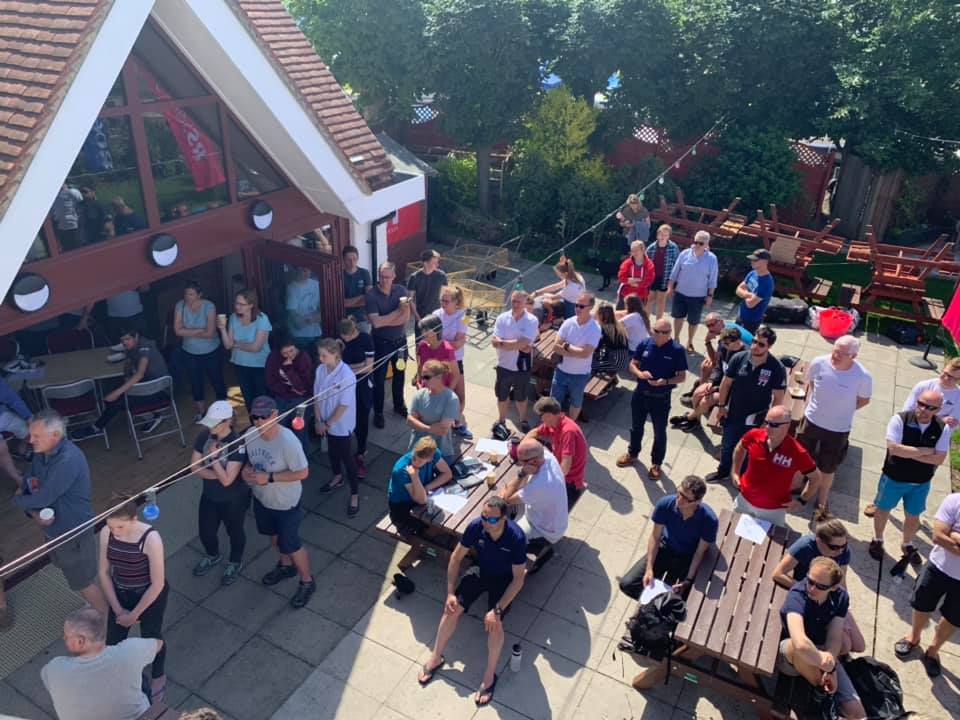 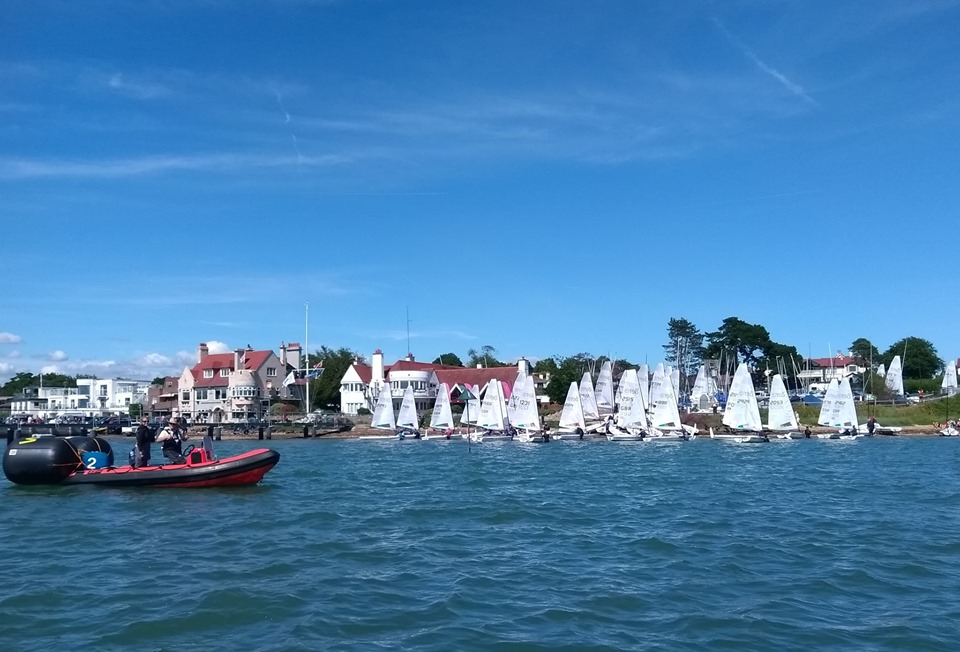 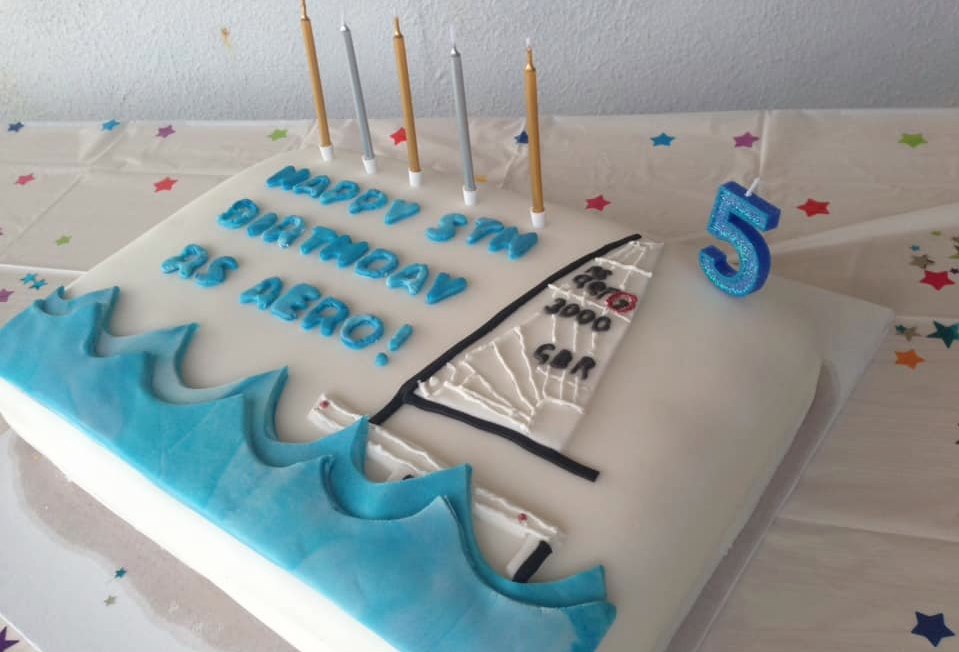 The RS Aero Class celebrated its 5th anniversary in style with 71 RS Aeros at their UK Southern Champs at Warsash, fittingly a new Class record for a weekend event. Competitors enjoyed great racing, some excellent surfing, a wonderfully sunny Saturday, a few drinks and lots of cake!

As a part of a limited trial of the prototype RS Aero 6 rig four of them raced alongside and on an equal basis to the RS Aero 7s. Sailors enjoyed that option and provided interesting feedback over the range of conditions we experienced.

RS Aero 5s by Sam Blaker;
During the Saturday the wind was constant all day with the breeze around 12-18kn which meant boat speed was key to finish in a good result. Overall Jonathan Bailey (Grafham) topped the standings after Day 1 with two firsts and a third. Sam Blaker (Benfleet) and Ben Millard (Emsworth) were equal on 7 points, just behind in second and third.

Day 2 was much more challenging for the race team due to changing wind directions and wind strength. Overall they did a fantastic job when setting the courses in these conditions. Once again Jonathan Bailey adapted best to the conditions and came out with another two firsts which gave him the overall win to become ‘RS Aero 5 UK Southern Champion’. Ben Millard had another fantastic day and which placed him in 2nd position, ahead of Sam Blaker in 3rd.

Melissa Meredith (Papercourt) finished in an excellent 4th overall and won the first Lady prize whilst Jenny Bennett (Lymington Town) finished just behind in 5th to win the Master prize.

RS Aero 7s by Tim Norris;
Saturday racing got underway in awesome sailing conditions, with 14-15kn of breeze from the SE and some cracking waves for the 47 RS Aero 7’s and 4 RS Aero 6’s. Race 1 got underway cleanly with Ben Rolfe (Burghfield) and Tim Hire (Lymington) swapping the lead, followed by a strong bunch of Warsash sailors led by Steve Norbury. Race 2 and 3 saw Alex Horlock (Warsash) come through and take the next two bullets, getting to grips with the RS Aero quickly.

Day Two saw a lighter breeze, 10-11kn from the SE again. Race 4 provided a race win for Chris Jones (Sutton Bingham) who sniffed out a large wind shift to the SW on the last leg, boosting him up the table overall. Big gains were also made for some of the mid pack with the leaders of Tim, Alex and Noah Rees (Torpoint) all being jumped at the finish. Race 5 saw a strong pin end bias, with the whole fleet tacking onto port at the pin end. The wind had reduced to 8kn, with a short sharp chop making tricky up wind conditions, Alex Horlock controlled the race well from Time and Noah. In Race 6 the wind reduced during the race to around 3kn, making it all to play for on the tricky down wind finish to the line against tide and Tim finally got the race win he had been chasing after all weekend.

Our most excellent host and Selden sponsor Steve Norbury finished 4th, politely leaving the podium to his young guests with Noah Rees just pipping him for 3rd. Tim Hire took second overall and Top Youth, just one point behind the winner, Alex Horlock, who had a fantastic first event in his charter RS Aero. 1st RS Aero 6 and top Youth Lady was Lily Barrett (Island Barn).

RS Aero 9s by Peter Barton;
A competitive fleet of 9s assembled but for this 2 day event numbers were reduced due to forecasted breeze on Day 2.

Many in the fleet had the potential to lead and ultimately there were 3 different race winners, Chris Larr (Northampton), Jeff Davison (Island Barn) and Peter Barton (Lymington Town). As the Solent chop picked up the RS Aero 9s revelled, veering their way downwind through large angles to catch waves and gain boats lengths.

The final scores after many close tussles saw Chris and Peter tied on points with Peter taking the tie break, Jeff secured 3rd.


Many thanks to Selden, Kingfisher Ropes and Rooster for supporting the event. A huge team of volunteers rallied from Warsash Sailing Club, the perfect hosts for what was an wonderful weekend!

The RS Aero Class is now entering a hectic Championship season starting this weekend at the Lago Maggiore International RS Aero Regatta with 10 nations represented. A run of National Championships follow in North American, Germany, the UK and then Sweden. The RS Aero UK Youth Champs at Rutland precedes the main UK Nationals in Scotland, on route for many southern sailors. The big one this summer is the RS Aero Europeans on Lake Garda with approaching 80 RS Aeros already signed up. September sees the annual RS Aerocup visit Holland this year, doubling as the Dutch Nationals alongside the large Dutch RS500 fleet.