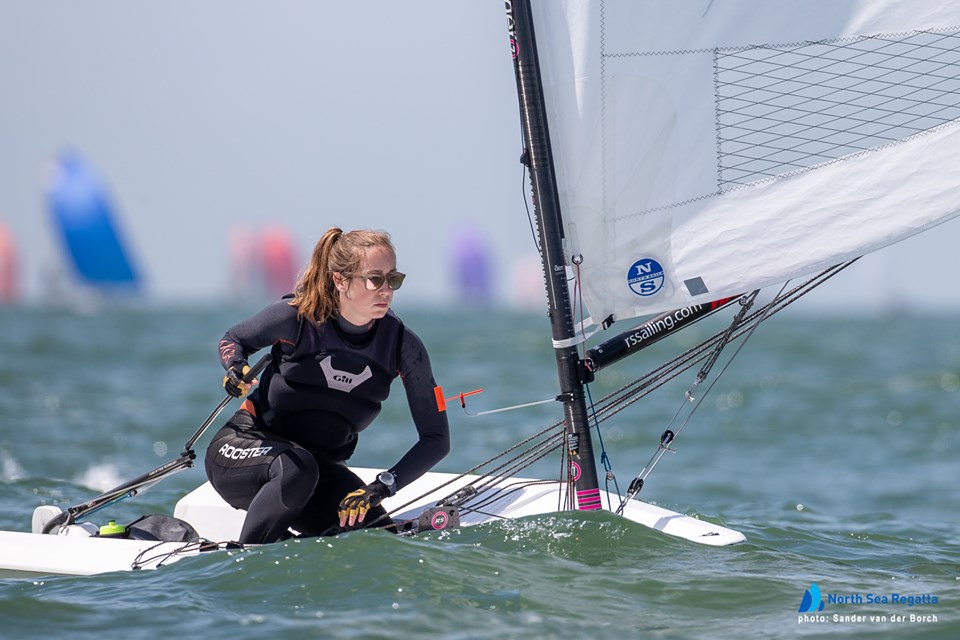 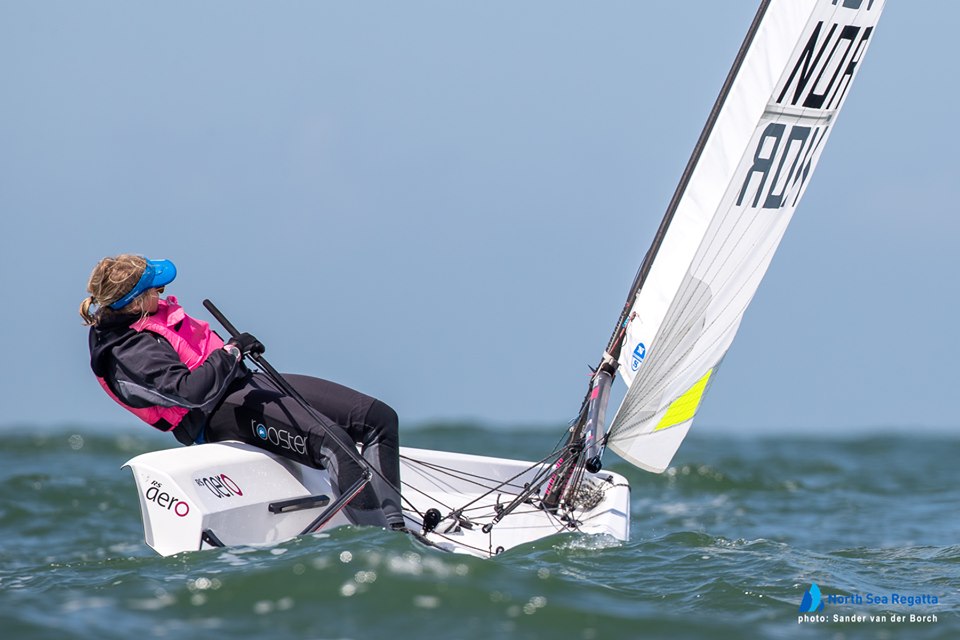 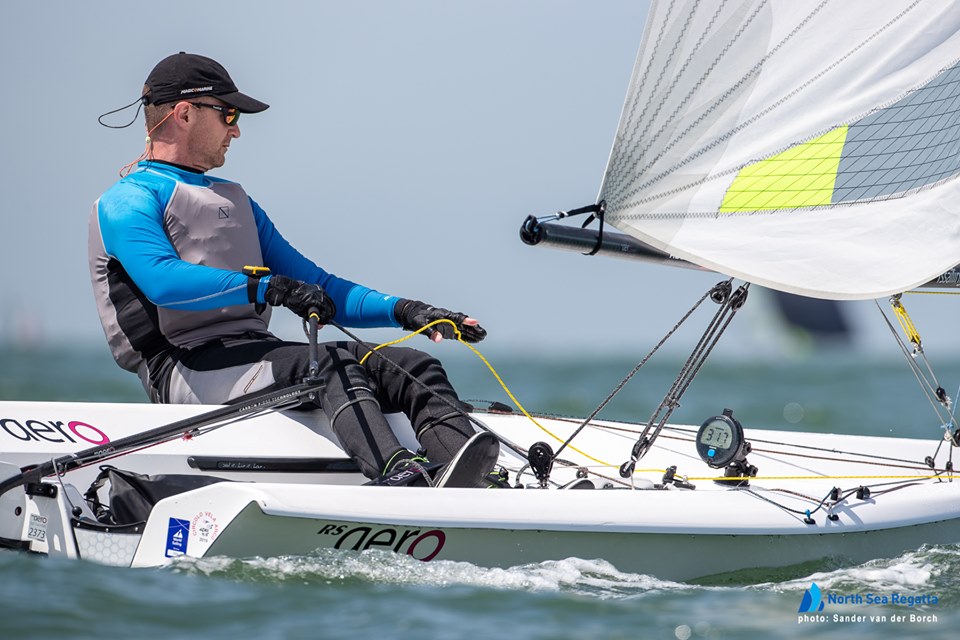 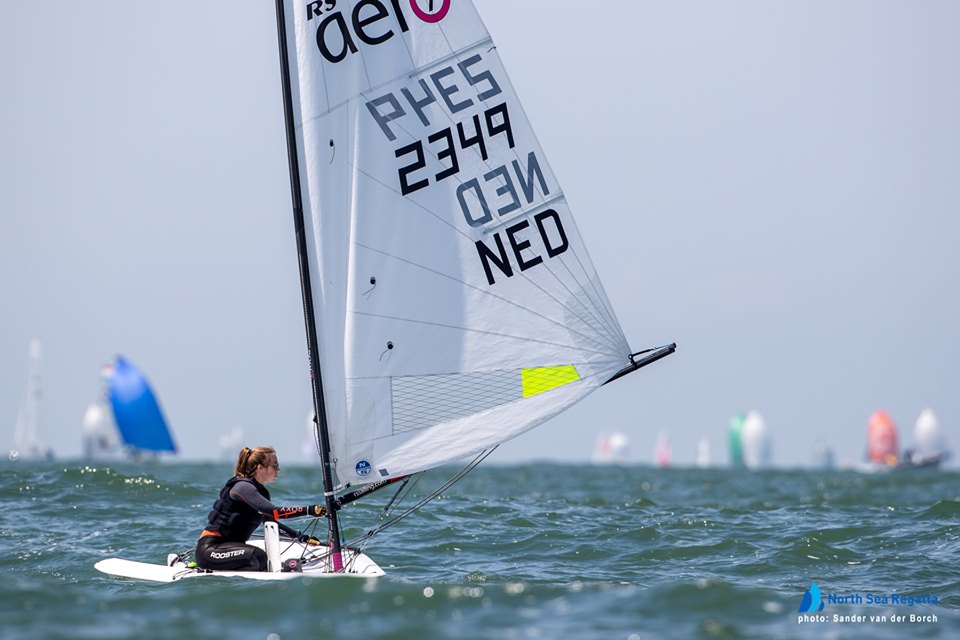 North Sea Regatta, Scheveningen, Netherlands, 8/10 June
Thanks to Arwin Bos for his report as the Dutch RS Aeros visit the seaside to enjoy the North Sea;
This year we decided to join the NSR for the first time. The North Sea Regatta is a large three day event on the North Sea outside Scheveningen, with offshore and inshore races sailed by a fleet of large and smaller keel boats, catamarans and centre board boats. With a late notification to our local class we wanted to try out this event to see if this should be an event for next year’s calendar. In total four RS Aero’s signed up, but one couldn’t join, so Karlijn NED2349, Tine NOR1431 and Arwin NED2373 were excited to face some real waves!
On the first race day, Saturday, the winds exceeded 30kts with gusts well over 40kts with serious swells. The race committee decided to cancel all races for this day. Only one brave sailor, the Dutch Olympic and World champion Marit Bouwmeester, dared to sail out for an epic photoshoot. Thanks to the NSR race director and with help of House of Yachts we could store our boats on a sheltered spot safe from the stormy winds.

With wind forecasts for the next days between 6 and 20+ kts we had to choose a matching rig, will it be the 5 or 7? We decided to take the 7 and took the gamble.

Day two started with a light breeze 6-8kts, and sunshine! After launching our boats from the slipway we underestimated the current and tide and arrived too late for the first start. We shared the track with Finn’s, 49-ers/ FX’s and F18 cats each with it’s own start. Eventually we could start for an up-down course with a gate. With just two other Finn’s on the starting line it was so plenty of space there. It became clear that we could only keep up with the Finn’s for a short period. When passing the windward mark they were already out of reach. We all chose different tracks on both sides of the course, yet ended up close to each other at the following marks and finish line. A nice first race to try out the currents and to get in the rhythm of the waves. By race three we were fully on, which resulted in 4 boats crossing the line too early. Karlijn, Tine and a Finn returned, but Arwin thought he was ok. Happy to finish first this time, Arwin later that day learned it was an OCS after all.

Surprisingly after race five another signal sounded and our class flag was hoisted, another race! We still had some energy left for an eager start of our sixth and final race for that day. Result after 6 races: Karlijn 1, Tine 2, Arwin 3.

Day three started with more wind, around 10-12kts, more waves and showers in the forecast. And yes, now we were the first ones to the course! With wind from the north and currents 3-4kts going in the opposite direction, we had some good waves and challenging moments on the starting line. Tine was pushed over the line on race 7, but not aware and got an OCS. During the race the wind picked up, and by race 8 all controls were fully on and we were hiking hard! Arwin reached the upper mark ahead of Karlijn, but while going downwind he was so stoked, pushed it too much, and had a classic capsize. Karlijn took the lead again. With the winds going over 16kts and in combination with the 7 rig Tine capsized as well, and the conditions started to drain energy.

During the 9th race Tine capsized again, on the downwind mark, and decided to head back to the harbour. Arwin and Karlijn finished the race in the usual order. With the way back in mind, against the wind and the waves, Karlijn and Arwin also decided to head back and play with some nice reaching and surfing on the waves.

What a great international event, fantastic venue and how exciting it is to sail on the North Sea! We had a super time, the opportunity to show off our Aeros, and mingle in this setting with current and upcoming national pro-talents. We hope to see at least triple the number of RS Aeros next year!