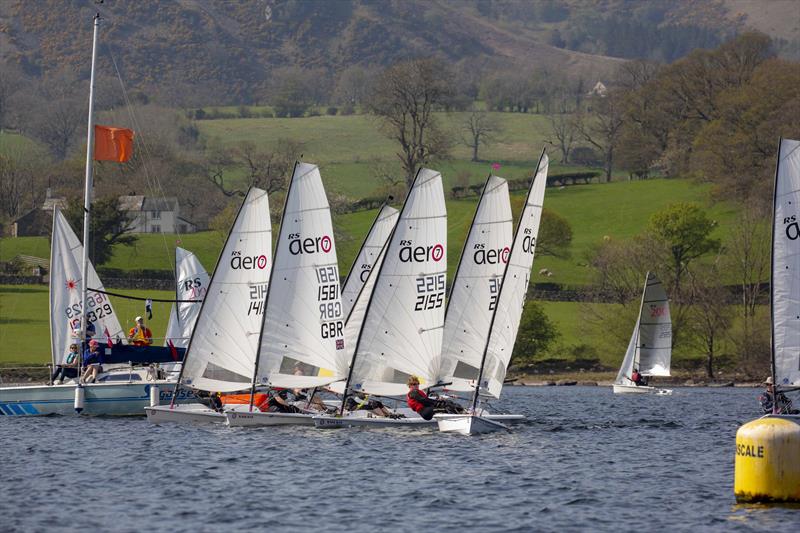 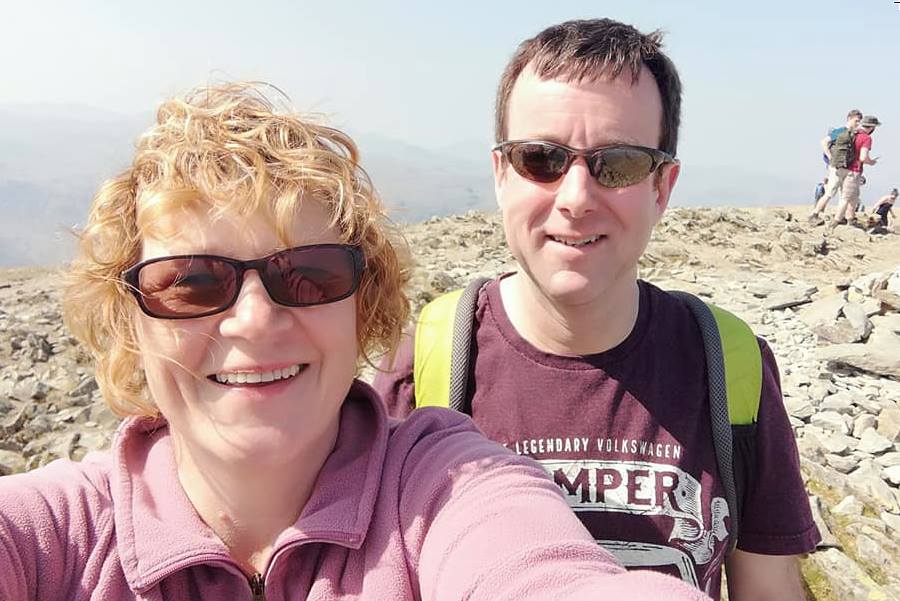 Thanks to Julie Archer for her informative and entertaining report!

This was an event planned for two days, with the RS Aeros having their own start (all on RS Aero 7 rigs) within the conventional fleet. In all, 72 boats attended this event, which included 8 RS Aero’s sailed by Jackie Craven, Iain “The Flying Scotsman” McGonigal, Keith Escritt, Steve Stewart, Nick Craven, Richard Butler, Julie Archer and trying the RS Aero for the first time, Sam Waller, an experienced RS200 sailor. The Aeros were their usual friendly crowd and happily helped Sam to rig his Aero so he could go out and practice, a tactic that paid well for him!

The plan was for 4 races on Day 1 and three on Day 2. However, the PRO’s were immediately challenged by the light wind forecast of less than 4mph so we were unsurprised to be postponed as the lake although beautiful, was like a mirror. We half expected it to remain like that for the day but the wind did arrive and continued to build to around 12 knots in the afternoon – What more could you want? Scenery, sunshine and a breeze.

Race One - commenced and as always, Nick Craven went for an early discard - does anyone know why his first race is always his worst? It was evident from race 1 that the competition was always going to be close, although Sam Waller made his mark by establishing a clear and early lead.

Race Two - and the breeze picked up a little, Steve Stewart had a determined look as he approached the line only to find he was OCS. Sam Waller kindly went back to keep him company. An interesting pattern began to emerge for The Flying Scotsman as he found himself challenged for position from an unlikely source -Julie Archer, who was being cheered on by her sparring buddy Jackie Craven “Go girl, go”. Another bullet for Waller, McGonigal 2nd and Archer 3rd.

Race Three - in which the special rule came in to play i.e.: everyone has to be in every position on the course during the race – Even Sam was beginning to be challenged as The Flying Scotsman began to get the measure of him and they battled for first and second place with Sam coming out on top. Keith Escritt had clearly understood the special rule as he slipped down the fleet from third to 8th giving Jackie Craven a dignified 7th. Actually we were all happy, except Keith. There is some Kudos in beating Keith Escritt and we may celebrate with new T-shirts at the next event. Keith’s Top Tip #1 of the day; “On the bright side - If you’re at the back you don’t need to sail defensively”

Saturday Night
As followers of the Northern Circuit will know, this is as important as the racing. There was beer, there was gin, there was dancing and singing and much merriment. See HERE a fine example of this and a hint of the joy you will experience when you come to the Nationals at East Lothian Yacht Club.

Interestingly, at our dinner table was the last man ever to be shot for being OCS at East Lothian Yacht Club - You can see the actual cannon on display when you join us in the bar at the Nationals.
There was also much discussion about just how close the fleet is - 2 years ago The Flying Scotsman was 5-10 minutes ahead in a race - he was to find out on Sunday what happens now if you make a mistake. We headed in to day two Waller 1st, Stewart &McGonigal = 2nd, Butler 4th, Archer 5th, Craven N, 6th, Escritt 7th and Craven J 8th.

Day Two Race 4 - Smiles all around with the breeze having picked up to 12-20mph for the day. Everyone settled back in and the fleet were close with positions changing at every mark rounding and if you missed a wind shift you were dropping down the fleet. On lap one with Archer and McGonigal in second and third place a down wind battle took place as McGonigal tried unsuccessfully to pass - until the leeward mark where an Archer fumble gave him the lead - the rest of the fleet took advantage and caught up. A wind shift behind the leaders, Nick Craven and Richard Butler were quietly battling race by race to see who came out on top – Nick’s turn this time with a solid 5th place. Waller took 1st again, Keith remembered how to sail his boat and took second, McGonigal 3rd.

Race 5 - Jackie Craven found her Sailing Mojo and after an awesome start she was at the windward mark with the leaders and then continued to attack any boats in front and defend those behind. Note to all, Top Tip #2; “Don’t mess with the Princess!!” When she’s on form she’ll give no quarter, unfortunately a missed wind shift dropped her back. Meanwhile, a few seconds ahead McGonigal, Waller and Escritt were battling for position, Waller miscounted his laps and continued up the course giving Escritt a huge grin as he sailed through to finish in first place. Meanwhile – Jackie Craven, Julie Archer and Steve Stewart were battling through the last seconds of the leeward leg trying to gain the advantage at the leeward mark. Archer came through behind but managed to sail above and over Stewart who was so surprised to find himself at the rear he forgot how to luff and was almost beaten by Jackie as she seized the moment to make gains.

Race 6 – Possibly the most eventful, with an OCS at the start – Waller kindly went back but yet again it wasn’t him – the flag was still flying and Steve Stewart & Julie Archer debated which one of them it was - too late to go back now - C’est la Vie! Mild Mannered Richard Butler showed another side and the first AERO-ASBO was subsequently awarded to Basher Butler. Nick Craven, who had been steadily improving all weekend finished in third position (he always peaks at the end) despite a little twirly dance after a brush with a leeward mark. Now, another interesting thing happened at the leeward mark in Lap 1 - a tightly packed fleet of 8 RS Aeros approached, - as always with Nifty Nick nipping up the inside - and some how (he’s not sure how) The Flying Scotsman went in at the front and out at the rear and his tartan cries were heard up the lake “Ooh Noo I’m last, how did that happen?”. He gritted his teeth and carried on and placed 4th in the end. Meanwhile as the race unfolded the recurring image of Julie & Jackie playing cat and mouse down the last windward leg appeared, as they rounded the mark Jackie tried valiantly to go up and over Julie to no avail, and Julie crossed the line ahead only to find there was only one beep - For Jackie , that OCS had caught up with Julie Archer!

The Flying Scotsman summed up the weekend with “I know where my happy place is and its not at the back”.
See you at the RS Aero UK Nationals at East Lothian Yacht Club 24-28th July, if not before!
PHOTO by Tim Olin