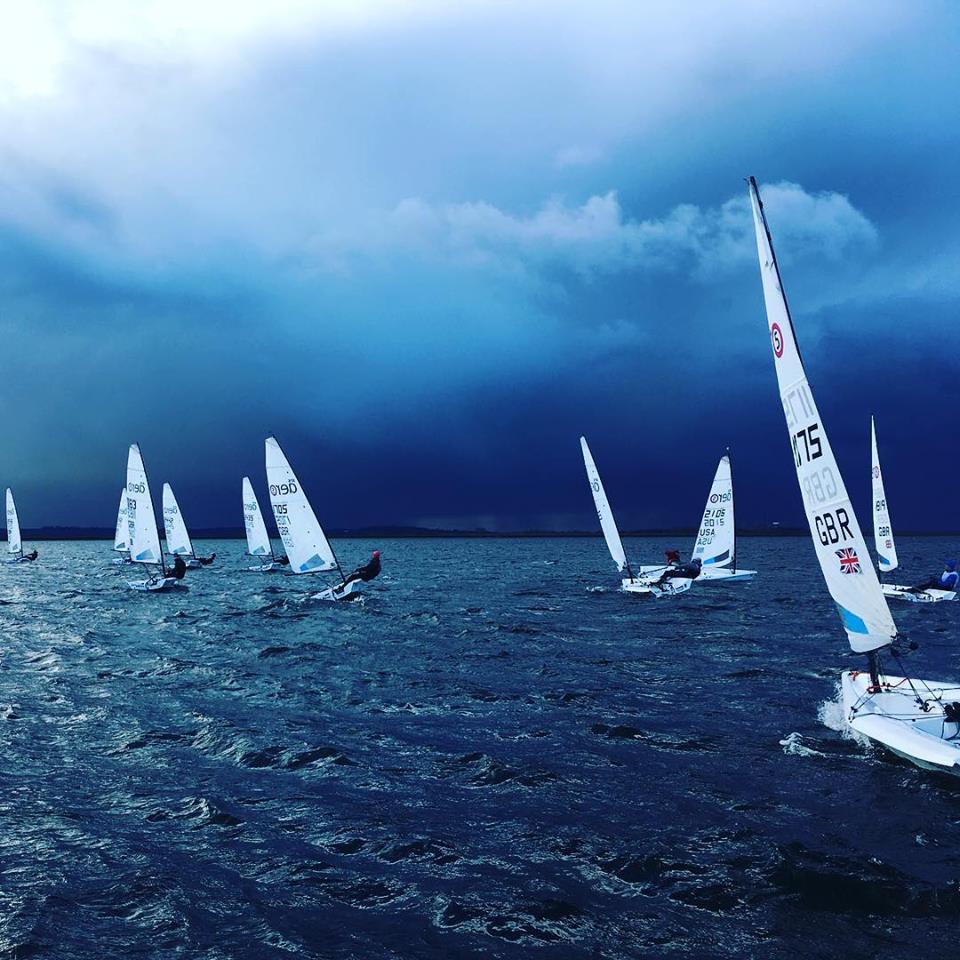 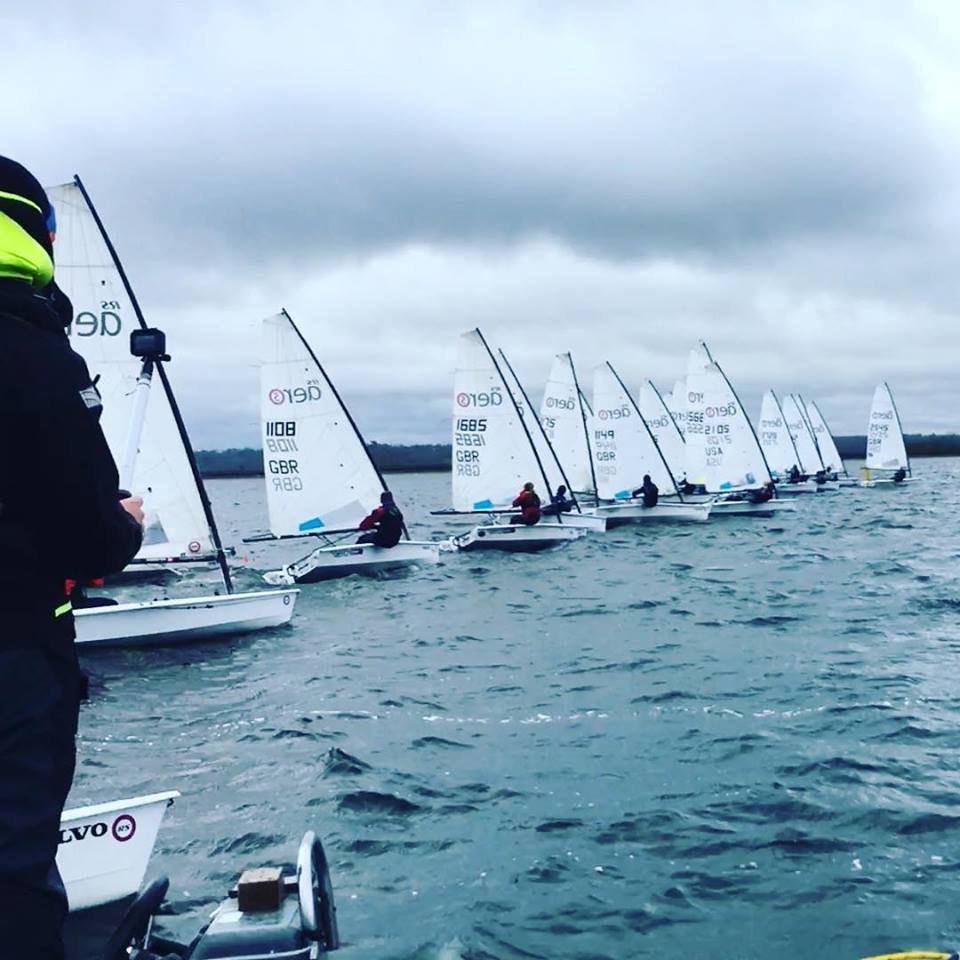 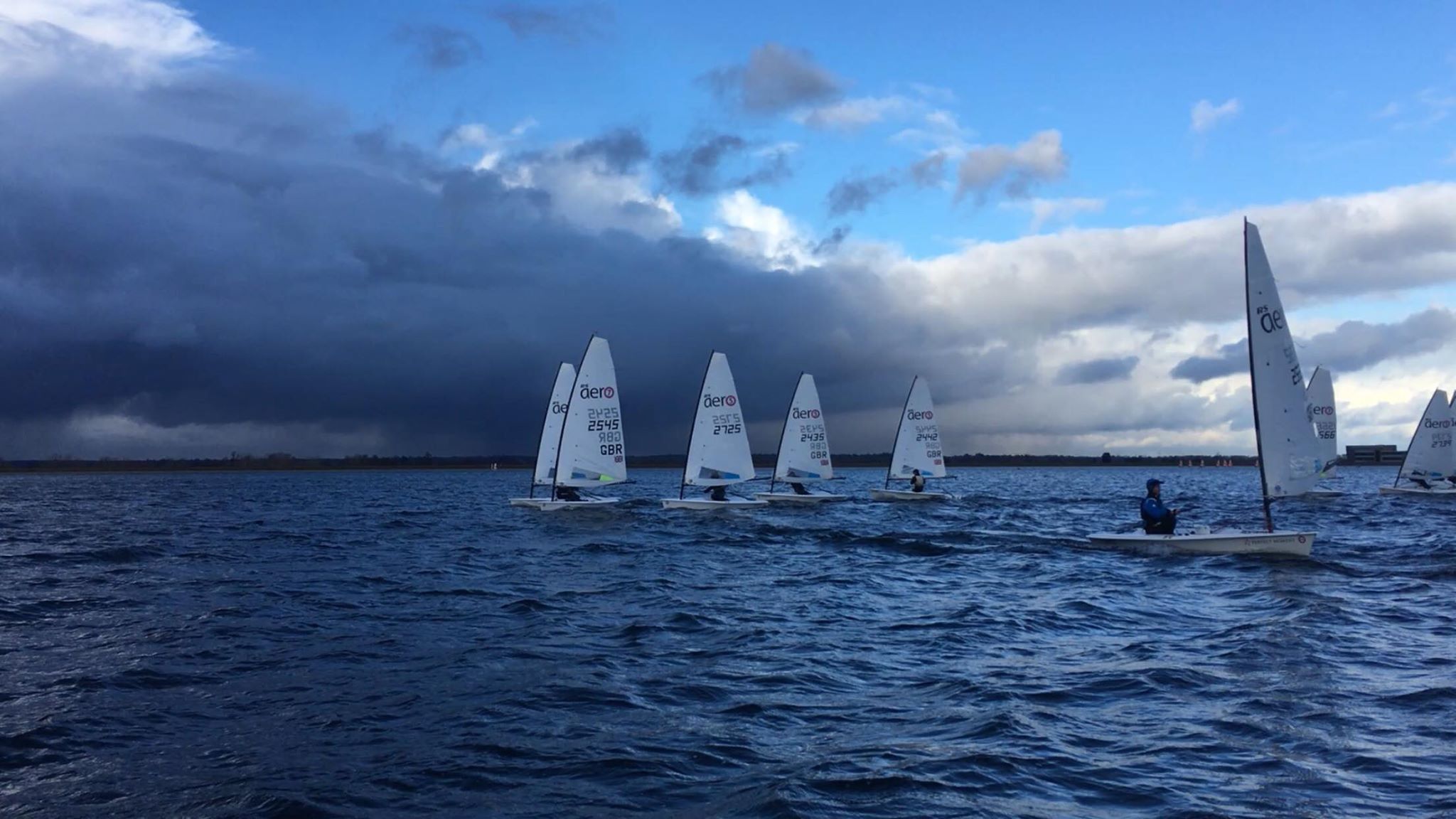 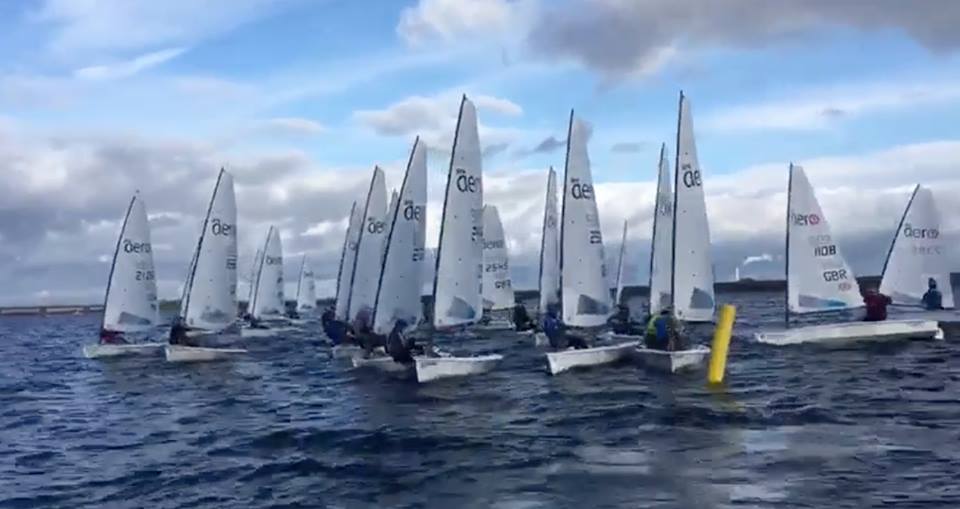 Thanks to Melissa and Josie Meredith for their summary;

On Saturday morning the conditions didn't look promising with gusts of 35knots; so while we waited for the wind to calm down, we used this opportunity to put Sammy and Noah to work showing us how to 'pimp' the boats out for the coming season. We learnt how to splice and different ways of setting the boat controls. The fitness session run by the coaches was a tough one! It included squats, lunges, plank and the dreaded Bring Sally Up Challenge.

The wind finally dropped after lunch and we managed a great session out on the water. Launching was made easier by the massive teamwork and help shown by the whole squad and especially Phoebe's dad who was waist deep in water most of the time. The focus was on upwind speed control and a slalom downwind with our rudders tied to our main-sheets emphasizing minimal rudder movements. This was a great exercise as it really showed how easy it is to over-steer.

On Sunday, it was a prompt start, with a quick briefing and getting straight out on the water to make the most of the sailing time. The focus for the morning was straight line speed with rabbit runs, tacking on the whistle and a big focus on having a flat boat. The video footage showed in the briefing helped understand at what point the boat is really flat.

After warming up over lunch, the afternoon session focused on penalty turns. What started off as rabbit runs with 360s and 720s on the whistle, turned into racing, which put all this together. However, the second race got interesting when the sky turned black and only a few boats started the race with Coach Liam scooping up boats. Soon most sailors were upside down with a squall of 30knots and hail. We promptly turned and made a beeline for shore. Again, everyone came together to make sure the RS Aeros and sailors made it safely to shore.

The debrief really highlighted the key learning points for the weekend with video footage of the penalty turns showing some great tips and common mistakes that were being made. The formula for straight line speed and the importance of a flat boat was a key learning point to take away from the weekend. Thank you to all the coaches for braving the cold!

The next Youth Training weekend on 9/10th March at Weymouth is one of two this winter that are open to additional sailors, facilitated by the addition of an extra coach. A few places still remain and RS Sailing have provided three charter RS Aeros to enable non owners to get involved. Full details are on the Event Page.
In the meantime many of the RS Aero Youth sailors will be putting their new skills from the winter training programme into practice at this weekend’s RS Aero Winter Championships within The Oxford Blue SailJuice event with an incredible 46 RS Aeros now entered!
Photos & Video by George Cousins
COMPETING FOR THE PORT END - video by George Cousins, analysis by Peter Barton;
Lots of gems for analysis here; Decision making, pro-activity, positioning, risk/reward, position holding, transits, bailing out, trigger pull, acceleration, lane holding...
- 1312 showed good pro-activity. Initially sailing out of a likely OCS situation. Could he have stopped a couple of boat lengths earlier (in front of 2552) to remain able to lay the pin? Then trying to double tack up when he realised he was not laying the pin. Ultimately he got stung from being out of position twice late in the sequence.
- 2552 might have had good positioning and won the pin if there had been no other boats there. However with 5 sailors to leeward of him trying to make it work there was always a good chance that someone would take him out. Too much risk for the chance of a little extra reward? Ultimately he suffered a touch of Frost.
- Good positioning and holding of position by 2442 and 2725, who just escaped the pin melee.
- Great acceleration by 2442, 2725 and 1809 at 0:37, just as the gun went.
- 2442 wins the start with 2725, 1809 also up there on his shoulder - just behind due to the line bias but with good speed and lane holding, avoiding falling into a lee-bow effect.
- 2105, and likely 1568 too, appear to be OCS, Ladies first! The advanced mid line position that 1312 was seeking to avoid.
- 1705, 1108 and 'No Numbers' - need to be instigating their escape strategy as soon as it is clear they are not going to be able to sail off the port end. You need to know how long that takes and plan accordingly. 2545 is the first to bail out and you can see his advantage from doing it before the others.