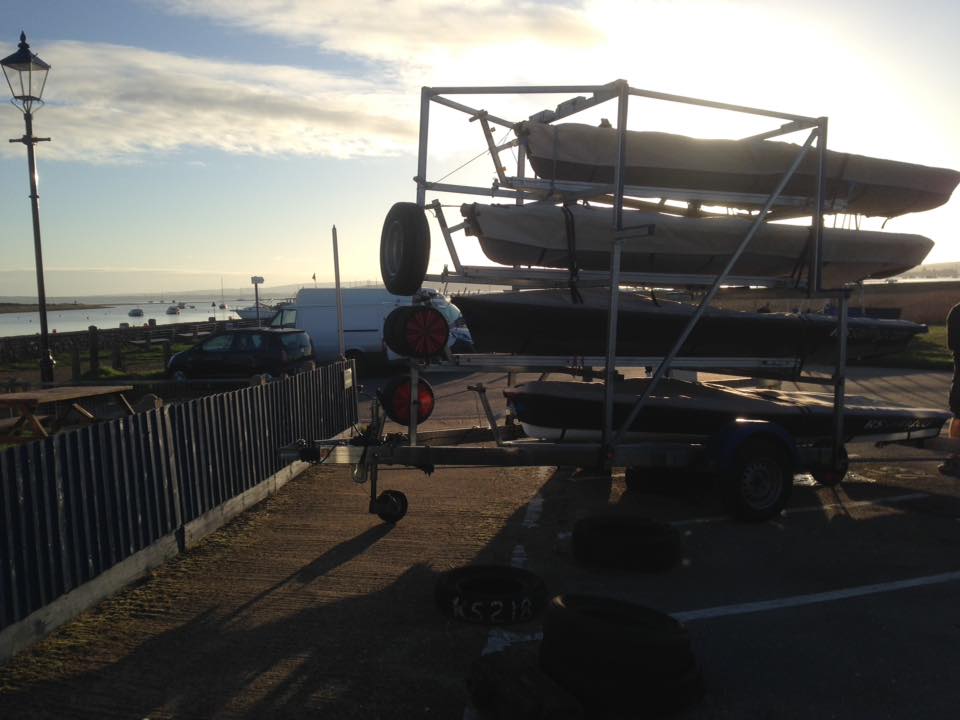 Keyhaven New Years Day Rum Race - Keyhaven YC, 1st Jan
HAPPY NEW YEAR!
The new RS Aero year started promptly with the Keyhaven YC RUM RACE early on 1st Jan.
A mixed fleet of 25 assembled for the PY race, a quick dash around the marshes punctuated by a splash of rum before and after - plus a bottle for the winner! The RS Aeros were in good attendance with 7 boats and all 3 rigs represented.

There was just enough wind for good racing with about 8kns and the glorious blue skies and mild temperatures provided a fabulous start to the year. The direction was perfect providing a square run down to Hurst Castle and beat back. We didn't need any more breeze as it was an early high tide this year and we all did a bit of bouncing off the mud as the tide dropped!

Keen to kick off the 2019 season Peter Barton jumped the gun only to be called back against the tide as the fleet cruised away off the downwind line. Tom Ehler and David Ellis had sailed their RS Aeros on a delivery race from Lymington with a early start, unfortunately however Tom was just a couple of minutes late for the start. He is going to need to sail his deliveries faster if he wants to complete this year's Sydney-Hobart before the 2019 RS Aero Worlds start in Melbourne on the 30th Dec!

The lead pack stretched away downwind with Nev Herbert leading in his RS Aero 9. David Ellis was looking good for the PY victory on his tail in his RS Aero 7. Joe Gallivan and Karl Thorne were there in the mix ready to pounce too.

As the fleet turned at Hurst for home the real challenge began - a long beat against the current and a narrow channel. The 9s started to show pace over the 7s with Nev sailing well to extend a good lead and Peter Barton slowly pulling through. Approaching the Quay to finish Nev then found and extra sticky bit of shallow mud and lost valuable time to be beaten by the H2 by just 4 corrected time seconds. In an attempt to get all his misdemeanours out of the way in the first race of the year, Peter, in addition to his OCS, took a 720 penalty for a collision and then capsized whilst gyrating!

Well done to Ian Sanderson on his win in his H2. This is the 2nd consecutive year the winners bottle of rum has escaped the RS Aeros after the Finn's victory last year. Maybe next year...for those not at the AUS Worlds.