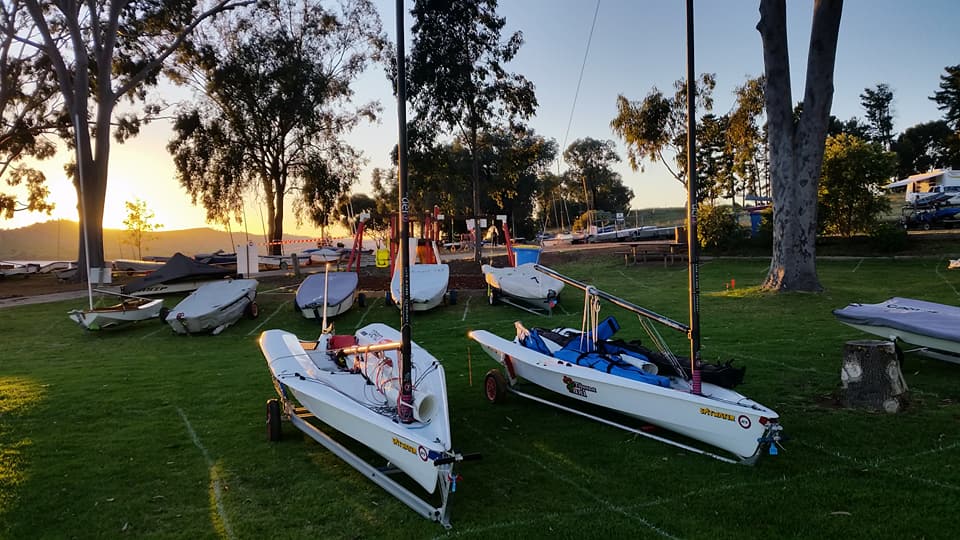 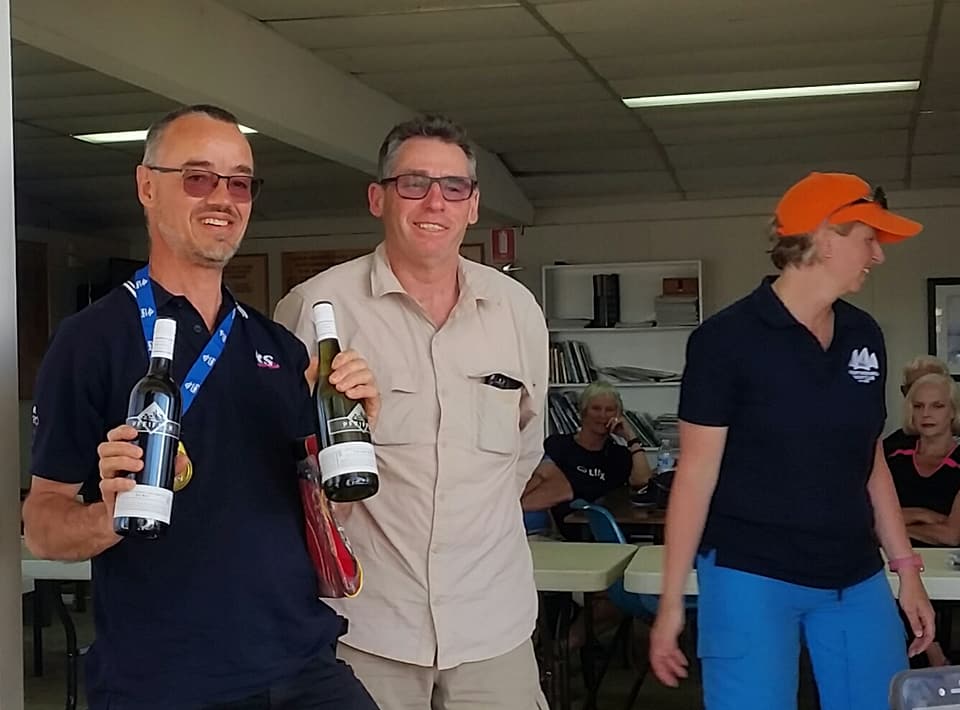 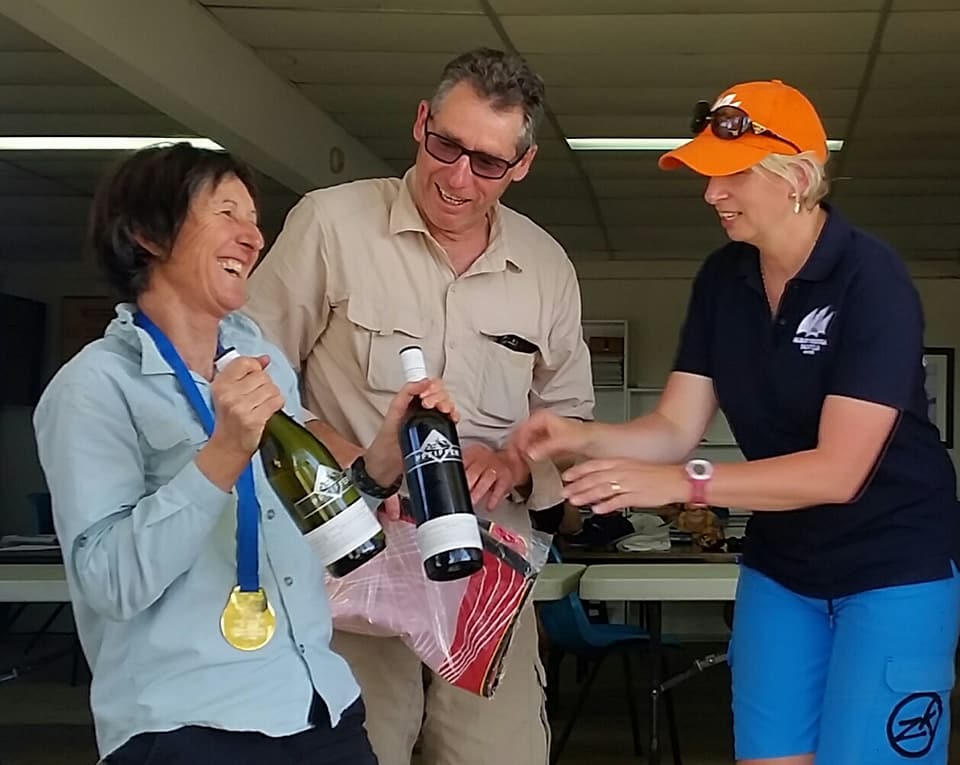 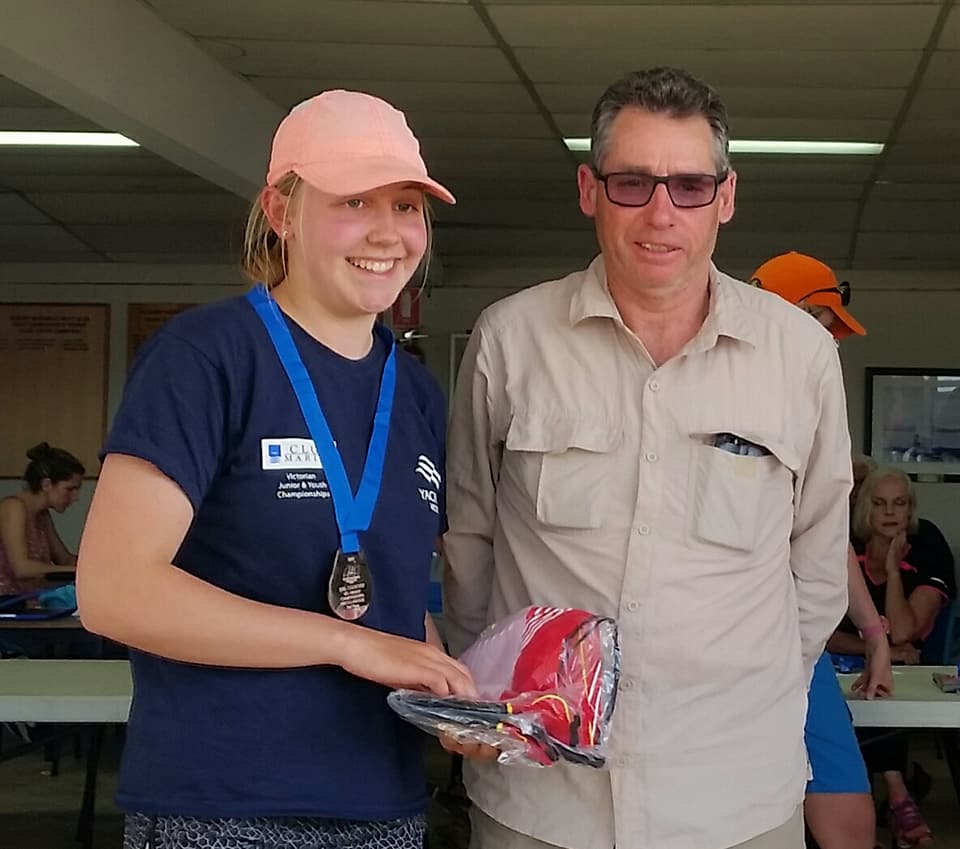 Sail Country 2017 - Albury Wodonga, VIC, Australia, 4/5 November
Three RS Aeros visited Sail Country 2017 to kick off the new Australian RS Aero season. Each rig size was represented and Ron Fergusson in his RS  Aero 7 pulled off the win for the Aeros in the Mixed Class fleet. Beautiful Lake Hume is located on the border of Victoria and New South Wales, midway between the fleets at Melbourne and Sydney.
Thanks to Ron Fergusson for his report;
Day 1
Light winds saw 1 race only in our mixed miscellaneous fleet.
Andrew Tijuana Taxi Giles correctly picked the port end start but was there so early that he attracted our attention so we slowly beat our way up the line to join him. Plenty of room and manners in our small mixed division, so Andrew got away cleanly on port, I tacked after him about 10 metres to leeward, Philippa Danks in the Aero 5 and Susannah Gillam on her Sabre (had a chartered Aero at Carnac) decided not to mix it and started down near the middle of the line.
I shadowed Andrew up the soldier beat to the top mark as we cleared out from Susannah on the Sabre and Philippa Danks in the Aero 5, and we got into the tail of the preceding fleets pretty quickly (Tasers & Contenders). Andrew cleared out on the return which started as a shy reach and then a barely perceptible creeping run.
The second beat started about 20-30 degrees off true and came round. Andrew kept mostly on port, while I watched him from afar and took every little short knock to work to windward. Managed to sneak in to the top mark not 50 metres before Andrew who had to take a second tack to the mark, we suspect due to a small current coming down the middle of the Hume Dam from the Mitta Mitta (River).
Thought I might manage to get away on the first reach leg of the Trapezoid (now a shy reach), but Andrew in the 9 quickly got way up to windward and over the top of me, taking a 420 with him for good measure. They were getting away with their hulls rippling while it was all quiet for me just 50-100 metres behind and to leeward, before the breeze then filled for me and I climbed up to them to round a little way behind .
Another dead quiet run /reach /whatever, down the next leg, except I was about to head off towards the wrong set of marks while Andrew was sensibly following his course notes taped to the deck. So I swung back behind him and rounded the next mark close behind, the 420 creeping in on their angles not far behind.Last mark and Andrew still just ahead.
Andrew now tells me if I'd looked up the lake to the farthest mountain tops, I would spot the last bits of snow, so I must look tomorrow.


Day 2
4 races, started with a good 15 knots just after 9 am, dropping gradually to about 8 knots when we finished racing about 12:30 pm. Wetsuits beanies and slickers on the course, surprisingly cold that katabatic wind coming down the valley from Mount Hotham! If there were any shifts, they were tiny, the breeze was very steady and true.
And now 6 pm we're sitting on the lawns drinking and chatting, wearing tee shirts and shorts, listening to more fine music, so very relaxed and cruisy. For those camping next year, be warned that the nights are cold (e.g. 4-5 degrees C).
Racing highlight: Philippa Danks in the Aero 5 beat us all to the top mark on the first beat of today's first race (R2) , and we only just edged past her on the runs and reaches, so a first on yardstick for her in that race.
Forgettable incident with good recovery: Andrew Tijuana Taxi Giles didn't spot the windward mark, but with remarkable long distance eyesight did spot another mark way up the valley that may have belonged to one of the other fleets. We did wonder where he was off to, he didn't look over his shoulder and when he finally tacked on a knock off the shore finally saw that we were long gone the other way. Was overstood about 20 degrees ABOVE (!!!) the mark, and hadn't tacked since the start, so a long long way away. Reached back and down the waves (best reach he had all weekend he says!) and must had had an amazing run back down the course (once he was back on course) to catch Philippa on the second beat, and start to worry me on the run to the finish.
My bad: first race this morning tried to squeeze the top mark inside Andrew, ended up head to wind dead alongside the mark while Andrew squeezed over the top, and then I had to gently back out and away for another go, while both Philippa and Andrew disappeared into the distance.
Closing race, all three Aeros within 45 seconds on corrected time, plus our ring-in Susannah Gillam also there, and overall Andrew, Susannah & Philippa each separated by one point.