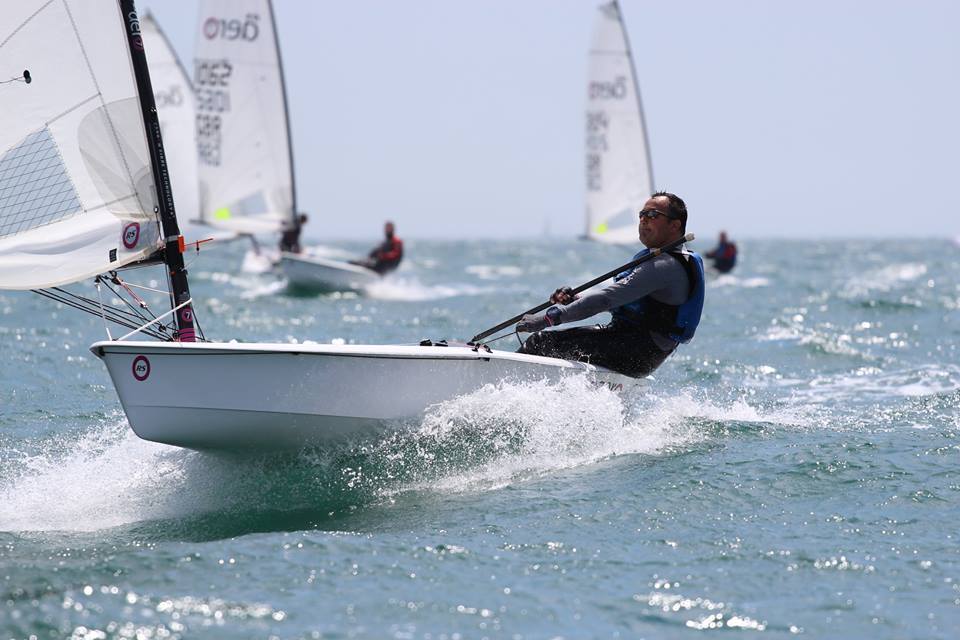 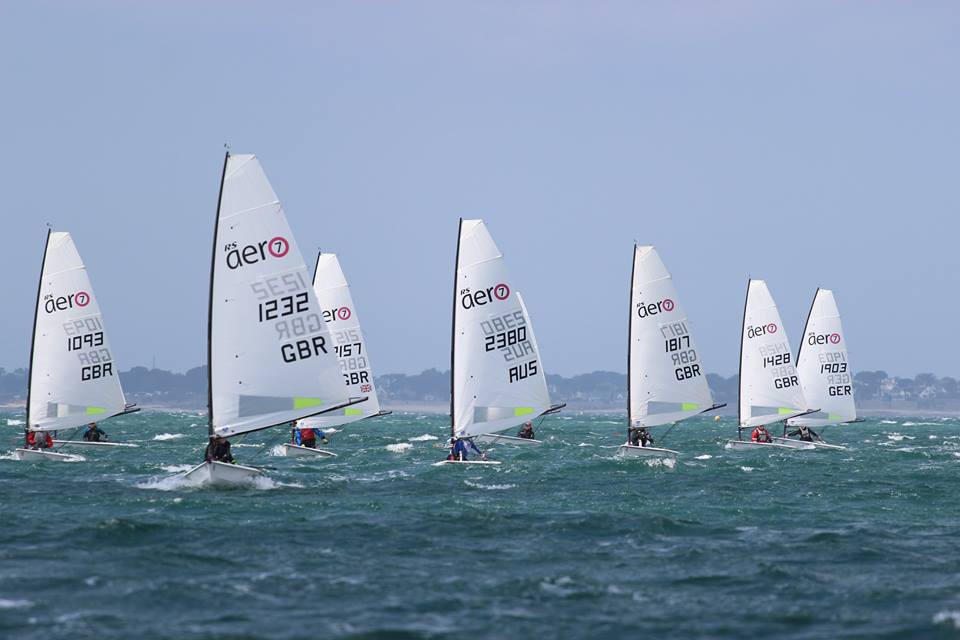 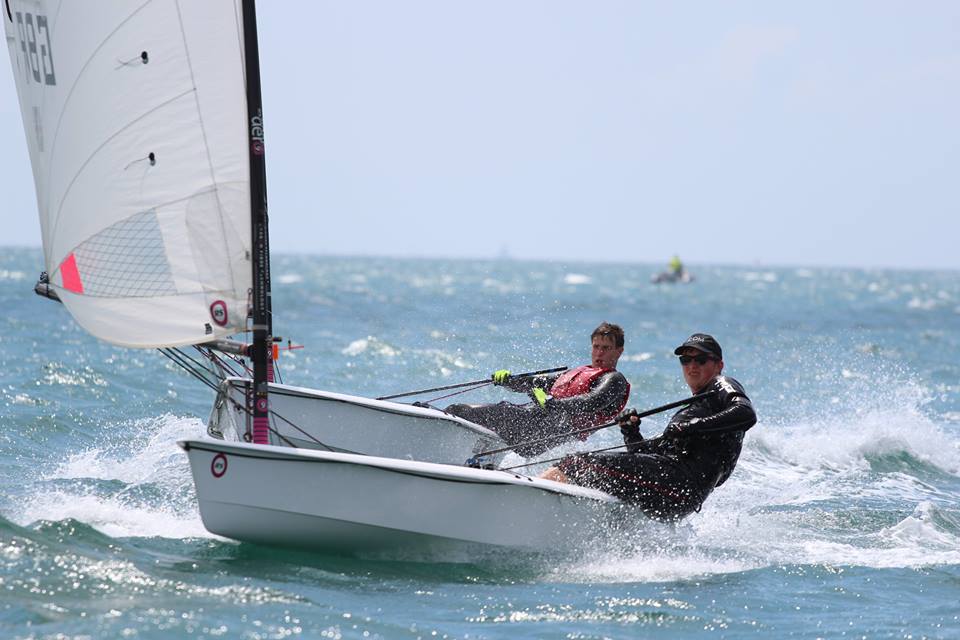 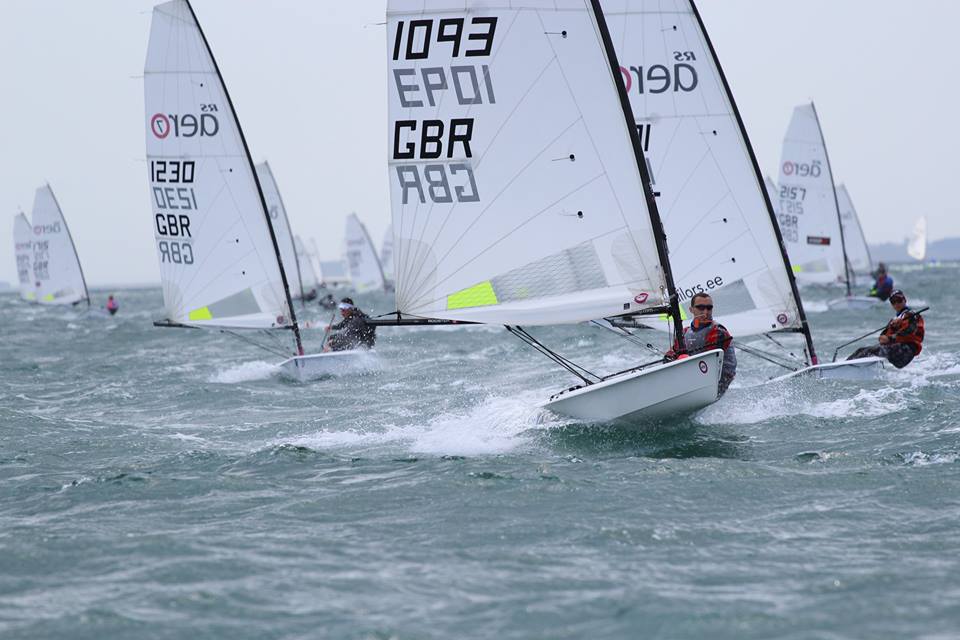 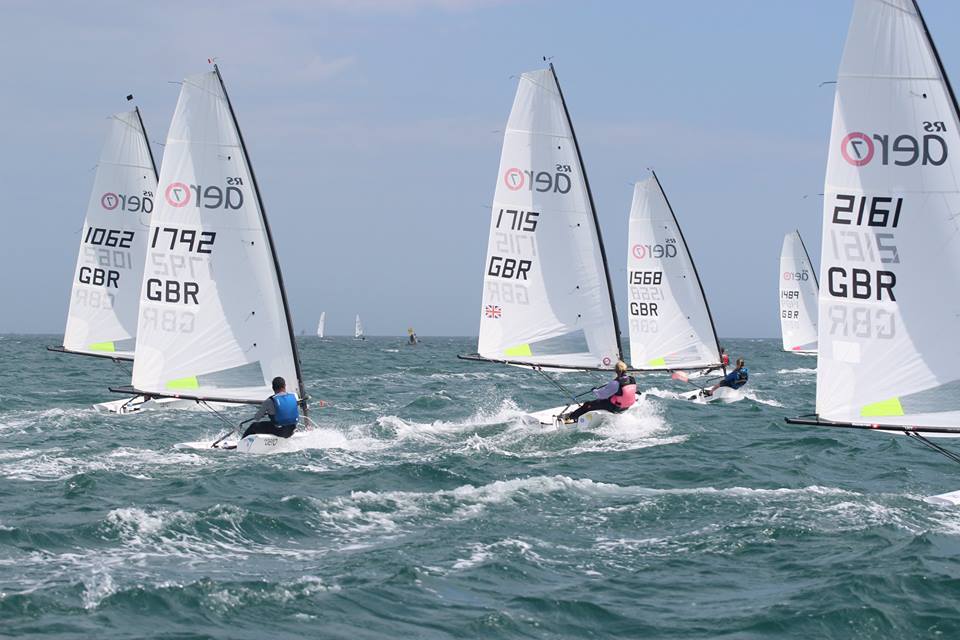 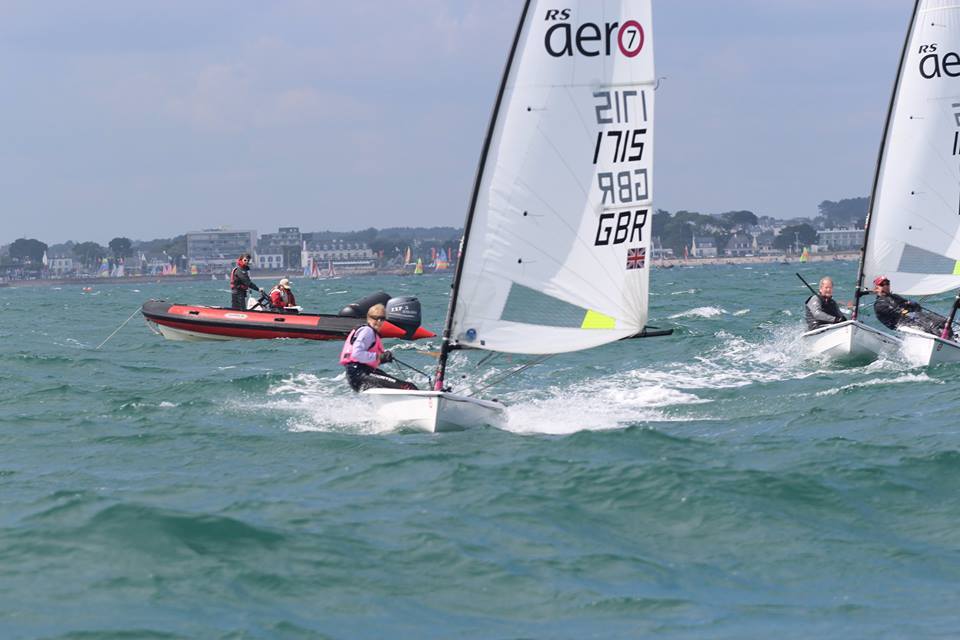 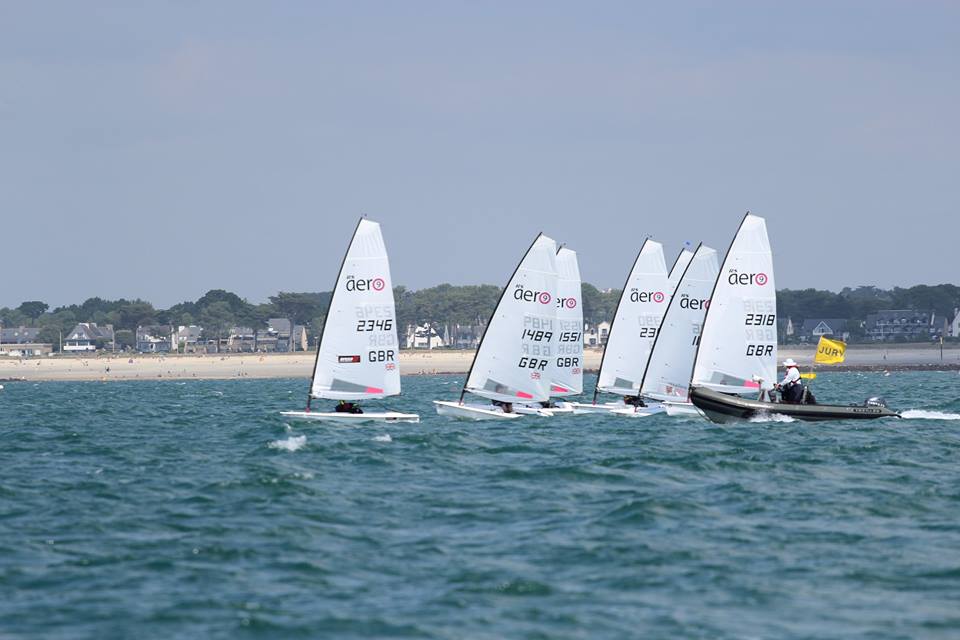 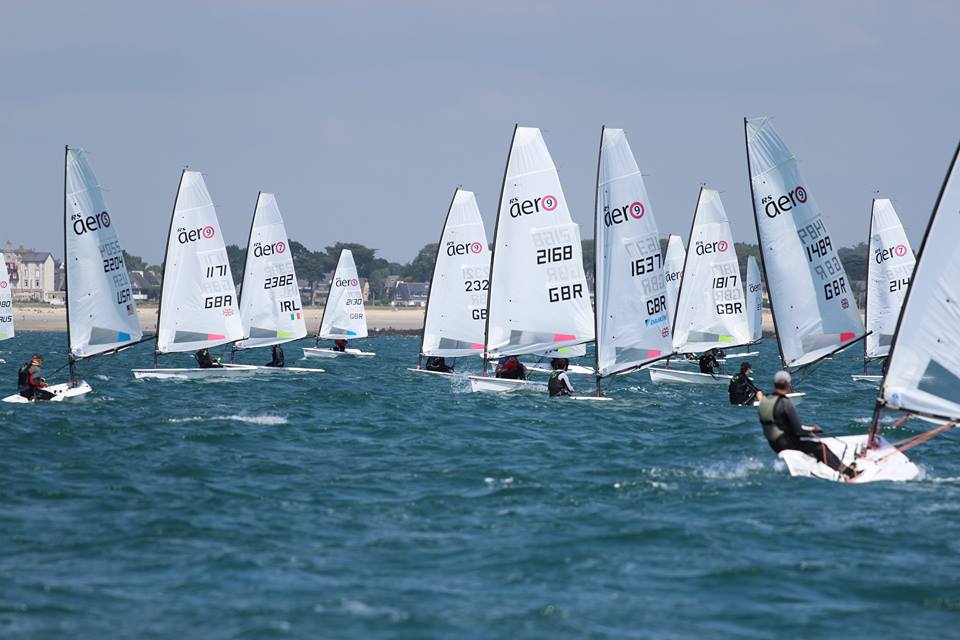 Rooster RS Aero World Championships
Carnac, France, 23rd-28th July 2017
by RS Aero International Class Association
A good fresh breeze greeted the RS Aero fleet again on Day 5, the deciding day of the 1st RS Aero Worlds. This was the sixth day in succession, ever since the new breeze arrived for the practice race. Whilst a fantastic time was being had bouncing over the waves off Carnac there were definitely some jaded legs in the dinghy park.

From the 21 boat RS Aero 9 fleet Marc Jacobi USA just needed one counter on the final day and he did that with style nailing the first race of the day to become the first RS Aero 9 champion. Liam Willis, GBR went on to take the next two wins to secure Silver and first RS Aero 9 Youth (U19) too. Greg Bartlett GBR defended his Bronze with two 3rds.

Similarly in the 22 boat RS Aero 5 fleet Andrew Frost GBR just needed one counter. However a DSQ for a start line infringement on the first race left him considering his risk exposure, before a safe result in race 2 secured him the title and first RS Aero 5 Youth (U19) too. Sander Puppart EST won all three races on the final day to take Silver from fellow Estonian, Andrias Sillaste EST.

The closest tussle on the final day was in the RS Aero 7 fleet with Rooster’s Steve Cockerill GBR two points ahead of Peter Barton GBR. Peter needed to win two more sailboat races than than Steve to have a chance of taking the title on tie break and the two had been trading 1-2s all week.

The first race saw Steve tacking to leeward of Peter on the start, keen to stay close. Peter pulled a low fast trigger off the line to roll Steve, but then made the error of continuing low and fast which cleared Steve’s breeze. He should have tightened his course and maximised his wind shadow for longer on Steve off the start line, to send the Rooster back into the hen house. Ultimately, Peter had a good lead at mark one, which Steve could not crack downwind.

The second race saw Steve ahead up the first beat with a good shift on the left with Ben Rolfe GBR. After lap one Ben still had a lead with Steve 2nd and Peter 3rd. Had Steve pushed forwards and taken the win he would have sealed the title there. However with a concern of having risked an OCS from his pin end start he looked back to slow Barton and avoid a chance of him taking a second bullet. Ben Rolfe took the win with Kristo Ounap EST in 2nd with Cockerill and Barton scoring discards.

So it was all on for the final race with Barton needing a 1st to win the Championship on tiebreak. A little lefty off the start saw Barton cross out on port and steadily extend a lead to be a ‘comfortable’ 1st at mark 1. Steve blasted through to 2nd on the downwind quadrilateral. Throughout the week Barton had been getting closer to Steve’s speed downwind and Cockerill faster to match Barton upwind. The second lap actually saw Barton extend a little downwind. The the final lap, the 38th breezy upwind leg of the week, and the gladiators were giving it their all! Neck and neck for speed and following each other out to the left Barton misjudged his moment to tack and a small shift saw his lead diminish. Another small shift, and perhaps a lull line, saw Steve take the lead, which he safely defended, downwind to the finish and become the first Rooster RS Aero 7 World Champion (and first Master (55). Peter took silver and Paul Bartlett GBR Bronze.

After some frenzied loading of 96 RS Aeros onto trailers of all sizes to travel home across Europe the Awards Ceremony followed. Celebrating an incredible week a splendid array of prizes were provided by Rooster Sailing and the three huge boxed replica trophies provided by RS Sailing were awarded to the Champions.

Straight from the awards the much anticipated sponsored Ron Abuelo Panama Party kicked off with nautically themed rum cocktails for all involved, to head what was to be a long final night in Carnac!

Many thanks to all at YC Carnac for being such excellent hosts, our hard working Jurors and to RS Sailing for such a large commitment to provide the charter fleet allowing our long haul competitors to easily compete. Thanks to all our sponsors who made the first RS Aero Worlds such an enjoyable occasion; Rooster Sailing, RS Sailing, Selden, Harken, SpeedSix, Ron Abuelo, Brittany Ferries and YC Carnac.
PHOTOS above are by Steve Greenwood and a full album of 12 pages can be found HERE, for downloads of those please contribute to the Andrew Simpson foundation HERE.
Photos by YC Carnac are HERE.
Prize giving photos by Gerard Vos are HERE.
DAY REPORTS and INTERVIEWS on Yachts and Yachting and Scuttlebutt;
Preview,  Day 1,  Day 2,  Day 3,  Day 4
Interview with Steve Cockerill of Rooster, RS Aero 7 World Champion
Interview with Marc Jacobi, RS Aero 9 World Champion
Marc Jacobi's Daily Blog
The RS Aero Facebook Group - for Chat and News from competitors
MOVIES
Below; Tension mounting after Day 2 and a Tour of the YC Carnac dinghy park with 96 RS Aeros!
More RS Aero Worlds Movies