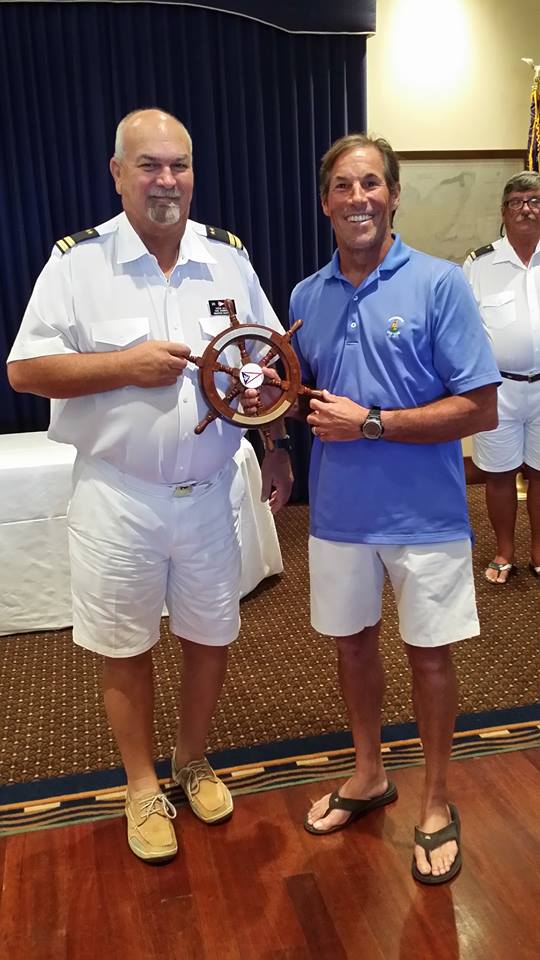 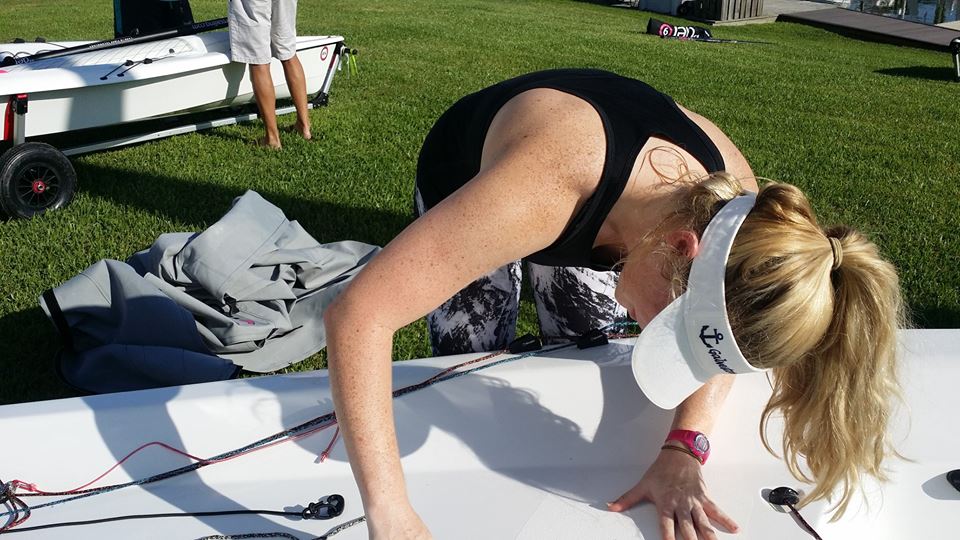 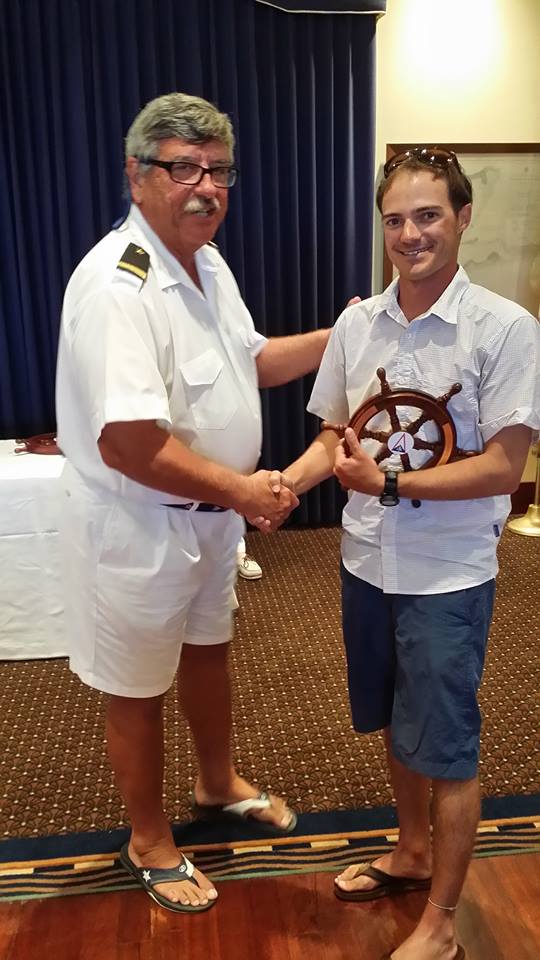 Houston Yacht Club, Texas, was the gracious host of the 2016 HOOD (Houston Open One-Design) Regatta, September 17-18 in Shoreacres, TX. 10 Aeros entered to contest 6 races in light, variable and extremely hot (90+ degree!) conditions. RS delivered the demo trailer from New England for this, the first of three Texas events on the 2016 North American Aero Tour. A number of people came over to talk about the boats and possible fleets in Corpus Christi, Austin and elsewhere--the curiosity and positive energy were great to see! We also had a few people try the boat out and come back grinning.

Mike Lindstrom sailed his brand new boat in its first regatta. Local sailor, Ash Beatty, missed a few races on Saturday but schooled us all in the last race with a runaway win. An acorn who didn't fall far from the tree, his 50+ years of local restaurant knowledge led me to enjoy a delicious dinner of shrimp and grits--definitely something one doesn't see on the menu in New England!

Ryan Murphy is a recent graduate who is determined to not be one of those millennials who stops sailing after college. Sailing a 7 rig on one of the charter boats, she handled the boat like a champ, and at the trophy presentation told me she couldn't wait to turn her sailing friends onto the boat.

A hugely pleasant surprise was the appearance of the Keeldude himself, Fred Schroth. A Thursday chat on Facebook inspired Fred to drop everything and make the four hour drive from Austin to Galveston Bay to try the Aero. Conditions weren't the most conducive to enjoyment for a fellow on the other side of 200 lbs, but Fred was his usual, ebullient self, regaling us with tales of derring-do acquired over decades of sailing.

Jon Larson is a fit lad who works for KO Sailing. He quickly found pace and was duking it out for top positions in Sunday's races, only to be let down by dying breeze downwind that let others sneak ahead. In more steady, moderate conditions, this guy's a threat. A focused, no-nonsense guy who did yeoman's work loading the trailer up in 95 degree heat--thanks Jon.

Someone forgot to tell Jamie Gilman that 7 rigs are supposed to be slower than 9s. Without that knowledge, he proceeded to battle for the lead in a number of races on-the-water, winning one on handicap on his way to Third Overall. Another knowledgeable KO Sailing person, who also helped with the trailer and fielded a number of inquiries throughout the weekend.

Clearly, Hank Saurage is a fine sailor who is used to sailing in light, variable conditions. In Race 1 he snaked ahead of me upwind on a left shift and walked away to a 2+ minute margin of victory. In Race 2 I covered him the entire race before breaking off toward the finish line about a quarter of the leg from the finish. Hank worked up a bit to windward and rode a building breeze over the top for another win. I was quietly cussing a blue streak, but had to admit the guy outsailed me.

The shift Hank played marked the arrival of a more typical, Southerly breeze that built to about 7 knots. This wind was less patchy, allowing the committee to set two more races which I was fortunate to win. After such a long day, Aero sailors were happy to retreat to Houston Yacht Club's air conditioned bar for some much needed refreshment before a yummy chicken dinner!

Going into Sunday's first race Hank and I were tied on points with 2 firsts and 2 seconds. Race 5 started in a 5 knot Northerly, in which I managed to get a good start and pinch off Hank to lead at the top mark and first gate. Having learned my lesson about giving Hank *any* leverage, I stuck to him like glue, and STILL he snuck ahead on the second beat. Lucky for me, a bigger boat got between us near the top mark, allowing me to stay ahead. While Hank and I were duking it out off to the right, Jamie Gilman tacked onto starboard after the leeward mark and sailed well left before hooking into a shift that brought him right up to Hank and me by the top mark, a 20+ boatlength gain on the one leg! I managed to leg out a bit on the final run but it wasn't enough to save time on Jamie, with Hank coming in third.

As cloud cover built up over the racecourse the wind began its retreat--if the committee was to get another race off, it would be the last of the day. With no throwouts, it seemed that between Hank and me, whoever came out ahead in Race 6 would win the regatta. Game on!

Hank started a bit to windward of me at the boat and tacked off right away. I tacked a little later, then tacked too soon for the new right shift and stopped dead. Realizing the error I tried to tack again and got caught in irons, and while trying to get out of *that* my tiller extension came off. All this while Hank merrily sailed away, with Jon, Jamie and the rest in hot pursuit.

I managed to chip away and gain a bit upwind, and think Hank and Jon had to make two tacks right at the windward mark which helped. I was really focused on trying to catch Jon and Hank, who were sailing on starboard downwind, closely overlapped. As I gained they both said I was being too aggressive with my body movements--they didn't protest, but let me know their displeasure. Annoyed but acknowledging the situation, I over trimmed my main until I was astern of them then resumed racing. Concentrating very hard (to now stay still as much as on where the wind was) I managed to pull out a bit of a lead on these two, and thinking my over trimming earlier might not have been enough, I also did a 720 before rounding. To our far right, wily local Ash Beatty let us contend with each other while he caught some pressure that pulled him waaaay out front!

Following Ash, I gybed around the favored left gate onto starboard and headed left. Soon after rounding Jon split right as did Hank, and Ash and I tacked to cover. Jon went well right and got a big shift, Hank got into it too and took off. Ash had enough of a lead that he easily had those two, but I lost them. Then I hit the weather mark while trying to get around before a J70 and had to do a spin!

Jon and Hank were once again right next to each other on the run, this time with a J24 to leeward. I rounded the final, offset mark 10-12 boatlengths astern of them, but with a clear lane was able to sail by-the-lee directly after rounding. From there I played every little puff and shift, reaching up when possible to get closer to Hank and Jon, going by-the-lee in the really light stuff to maintain pace, and sticking the boat dead down in minute puffs. Because of the J24 to leeward, Hank and Jon didn't have those options and were stuck sailing a slow angle, allowing me to eventually pull ahead on this long run to the finish, with Ash still way out in front. Exciting stuff!