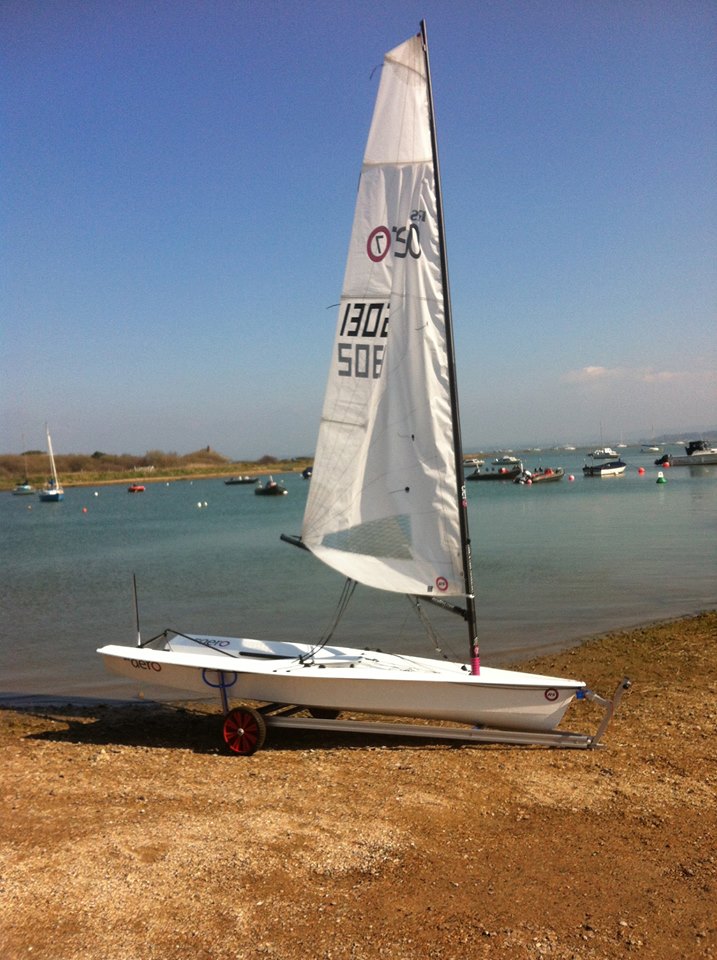 A fleet of 25 gathered for a relaxed one race per day series over the four day weekend with an extra Easter Egg race on Easter Monday. The fleet largely consisted of a good Finn turnout and a variety of Lasers so it would be interesting to see how the racing would unfold between the similar boats during the 4 days over a variety of wind strengths and angles. Both the RS Aeros were used their 7 rigs.

David sailed all four days and won the regatta overall with a 1,4,1,4. As he is at the light end of the scale for the 7 rig it is interesting to read his account;

“Only being 59kg and in a 7 rig I was very quick downwind as would be expected. I found it very responsive and it paid to work the boat and hunt the angles to keep it planing. On a run working it hard with big angles meant you got waves others didn't.
Upwind was hard work when I was overpowered at over 15kn but it is far more rewarding to sail than a laser and the rig more adjustable. However, I am sure that if there had been a fit 70kg person there they would have thrashed me in over 15kn!
Compared to Finns I was quicker all round under 15kn and much quicker downwind. Over 15kn I was overpowered and slower upwind but quicker downwind.”

Karl only managed the Monday, which was 10-12kts on a simple trapezoidal course. Here is his account;

“Most of the fleet initially started the wrong course which gave a couple a head start and hence the final results. Dave was blisteringly quick, managed to break the pack by the second mark and was launched. He was especially quick on a run by really attacking the boat – it would definitely be worth getting some video of him doing this, sitting still is no longer an option!

I was up front behind Dave by the second mark but lost stacks on the run by getting tangled with the Finns at the gybe mark, this put me deep in the pack but did give me the chance to race the Finns close-up. My feeling was that I could match them up the beat and enjoyed a bit more pointing in the flatish water, easily quicker on the reaches and slightly slower at times on the run, but I suspect this was down to my technique. At the end I finished just behind the first two but pipped them on handicap. The moral here is make sure you have a clear first reach to get clear of them and know where you are meant to be going afterwards! Against the Lasers we were just quicker all-round as you would expect.”

On the Monday there was the extra Easter Egg race with 19 starters. David managed 3rd behind an RS Quba in 2nd with a Lymington River Scow sailed by Jon Harvey taking 1st. Jon takes delivery of his RS Aero later this month - if you cant beat them, sign them up!