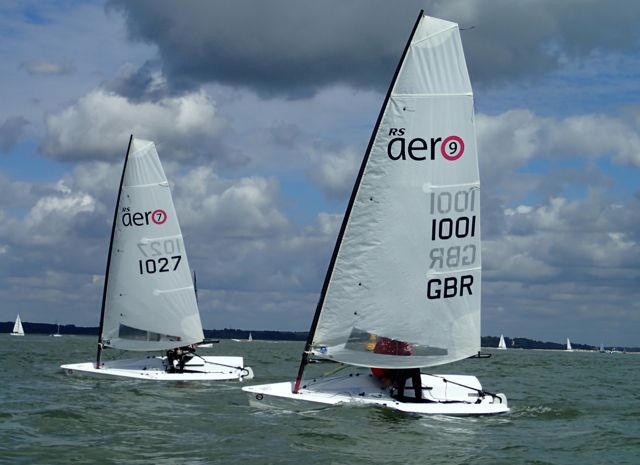 With twelve RS Aeros having so far arrived at Gurnard Sailing Club, a Mini Regatta was held last Saturday with nine Aeros taking to the water in perfect sailing conditions, the entry fee being one cake! With the sun shining and the wind a gentle Force 3, Race Officer Chris Symons was able to set the start line within 100 yards of the Club Slipway. Following a briefing at 1.30, the first start at 2.00 had just enough port end bias for Paul Blowers to cross the fleet on Port, but he was eventually passed by Brett Aarons who took the first race. The second and third races were won by David Rickard down from Queen Mary, but becoming a regular at Gurnard. With the wind building, the spreader leg was lengthened to increase the reaching and enabled all to revel in some fast planing. The fourth and fifth races were again won by Brett who was enjoying the change from his usual RS100. David took second overall, with Paul taking a break from his Finn Masters Circuit coming in third. This gave a sweep of the podium to the '9' rigs beating the '7's on handicap.
The afternoon was a great success with us being back ashore by 4.30 indulging in coffee and cake.
With at least three more Aeros due by February, we expect to be holding several similar events next season. A rib escort can be arranged for visiting mainland boats to park at Lepe Beach and enjoy the short sail across what is the narrowest part of the Solent.
Report by by Phil Wright