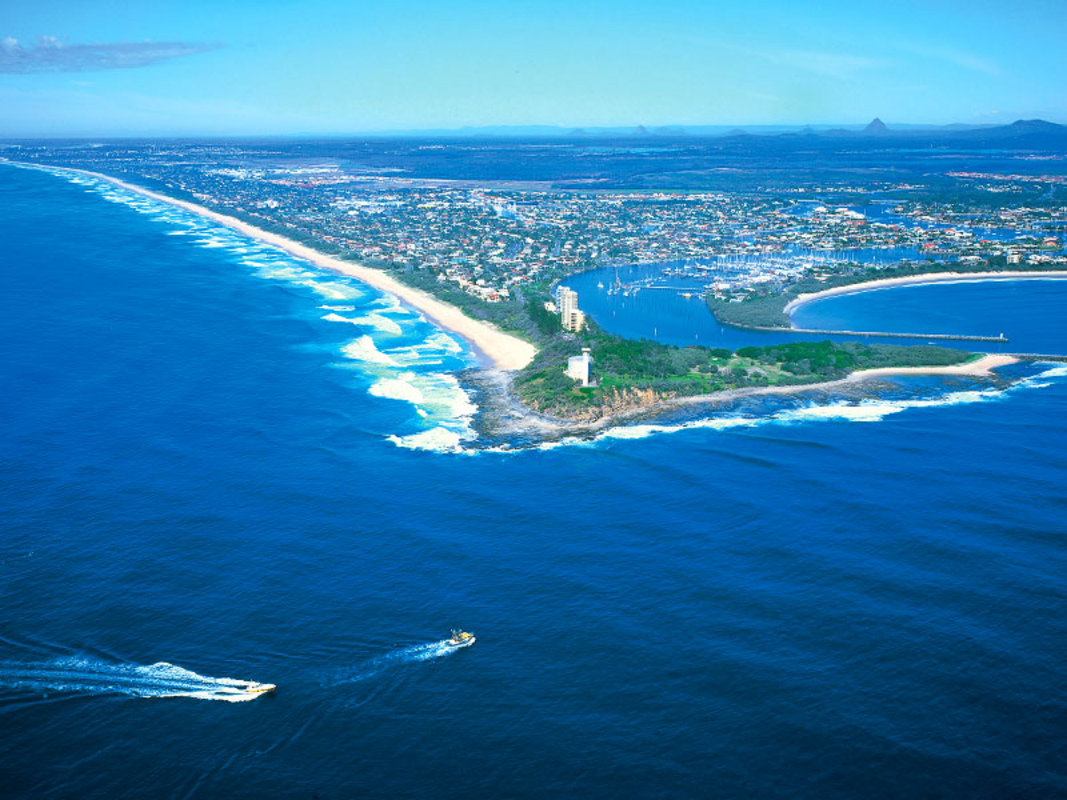 After two previous opportunities where the wind was either 25 knots plus, or barely able to register 5 knots; the forecast for this coming Saturday is looking very favourable:

1. An early morning high tide; meaning we will benefit from tidal currents running up the coast to Mooloolaba; and

3. an innocuous 2 metre swell from the East with an 8 to 10 second period between peaks, meaning exciting surfing conditions with little to no risk of rogue rollers that can frequent the sailing course being taken.

4. Mostly sunny with occasional showers, meaning that we won't be hidden from the vision of container ships cruising at 30 knots, or from whales that have their sonar systems in sleep mode whilst attempting a breach (whales frequent the area north of Cape Moreton).

We have a very fast ocean-going rescue boat shadowing - I hope I'm not called upon to rescue them - there is little room for passengers on a 13 foot skiff/ RS Aero 7.

The voyage plan will see a departure from Royal Queensland Yacht Squadron at Manly @ 0700 on Saturday; reaching Mooloolaba Marina @ no later than 1600. There is a chance I could make it for lunch if I sail like a 20 year old (my wife wishes).

We have a GoPro cap-mounted video camera that will capture as many exhilarating segments as possible – yes, watching an RS Aero 7 running up and down 2 metre swells at a healthy pace through salt spray, occasional waves over the gunwale, all whilst dodging container ships and humpbacks heading north for the winter, has to be exponentially more exciting than a Joe Hockey economics lecture, or a Julia vs Kevin documentary.

One of my generous sponsors this week sent me a GoPro video clip of his exploits kite-surfing in some exotic location that I could not pronounce, let alone afford. The second leg of Harpers Challenge in Nov 2015 may be expanded from a solo windsurfer making the trek, to a match race from Manly to Mooloolaba against a very capable and high profile finance industry identity that has a passion for kitesurfing and exotic locations (no, it is not Richard Branson).

For those Brisbane/ Sunshine Coast locals with Marine VHF radios, channel 77 will be the encouragement channel this Saturday. VHF radio etiquette applies.

There will be a few glasses raised in Mooloolaba on Saturday afternoon if all goes to plan, but there will also be a number of SEQ kids that will be needy beneficiaries of your donations to Student Care Welfare QLD .... Sharon, Charles and team will be working the phones from Monday, contacting pledgers to convert pledges to a donation.

Yours sincerely,
Mark Harper
www.harperschallenge.com
CONTINUED...
What a day it was....but the day did not go to script!

The wind was much lighter, and more from the south than the east – that meant I spent the best part of 5 to 6 hours on my knees* due to having to square run. Square running means a slower pace, and much more balancing from the skipper. I didn’t contemplate the consequences of this combination on my body, apart from the fact that I knew I wouldn’t make it into Mooloolaba until around 4pm.
(*ED; always better to sit on the inside edge of the cockpit rather than kneel, more comfortable and more manouverable)

Half way down the Spitfire Channel, it got quite hairy – the wind had a SW bias making me take a port tack to Caloundra. That was fine apart from what built to 3 metre seas with the occasional rogue even bigger coming amidships on my starboard side. My balancing skills had to lift a few notches, given that the wind pressure in my sail was increasing and reducing with every wave/ swell.
I elected as planned to cut the corner (not round the final shipping beacon at Caloundra) which was a wise decision for me. My safety boat opted to round the shipping beacon due to their deeper draft, knowing that I was still in sight. I was offshore about 3nm from Kawana when my legs started to cramp severely – end result was a capsize and my inability to continue with the cramp. I made 90% of the journey under my own steam, and the final 10% to Mooloolaba in the back of our rescue boat.

It was somewhat emotional to have to motor into Mooloolaba having come so close to finishing as planned. But I knew I put in 100%.

Regardless of your decision, I sincerely thank you for your interest in Harpers Challenge 2015 and for what I hope is your ongoing support of Student care Welfare QLD.