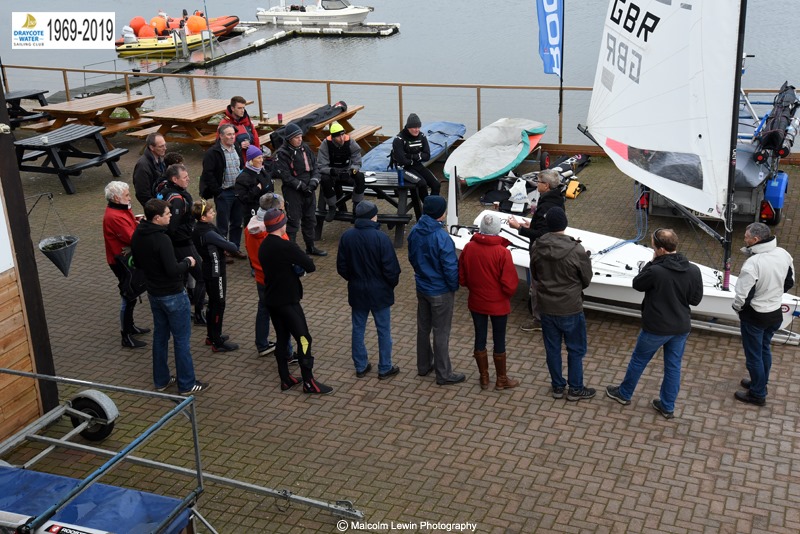 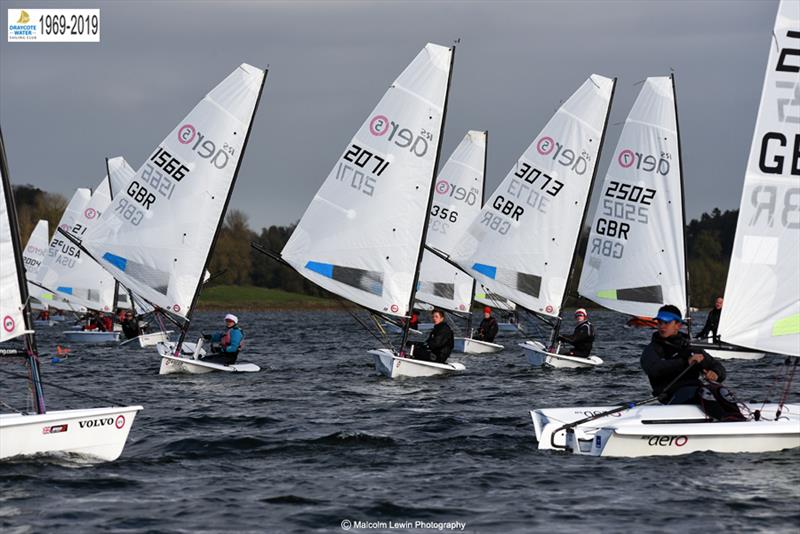 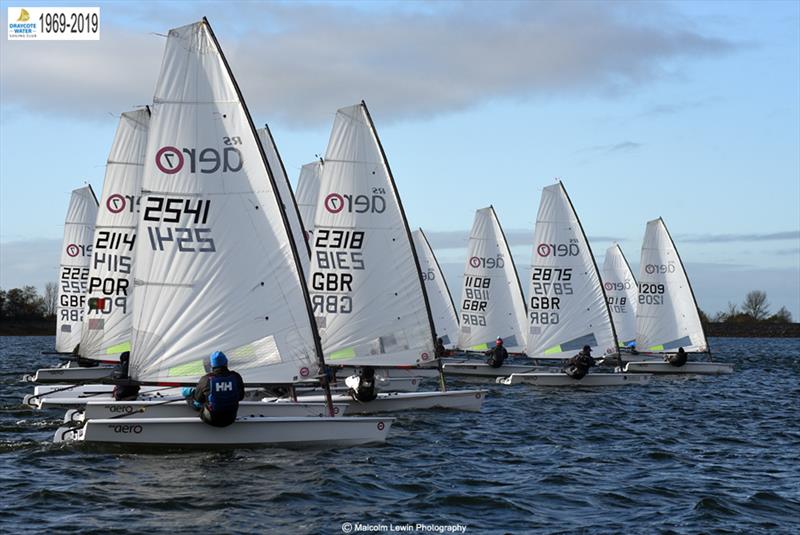 Saturday started with a quick pre event coaching briefing to help prepare the new and rapidly expanding RS Aero fleet at Draycote to be ready to race. Medium breezes provided excellent racing although the first bite of winter was felt and sailors wrapped up warm for the 7 race series. A very welcome Aero Hot Chocolate was provided at registration together with Aero bars to take afloat - perfect for a chilly weekend!

A wonderful touch for Remembrance Sunday was RS Aero sailor, Will Gifford, playing The Last Post on his horn from the committee boat after Sunday’s first race. The fleet then observed two minutes silence to remember our fallen heroes.

RS Aero 5
The RS Aero 5s saw an entry of 21 and several sailors keen to test themselves before the upcoming World Championship in Australia. Jonathan Bailey (Grafham) took the series by a point from local RS Aero sailor Fergus Pye (Draycote). Ben Millard (Emsworth) was 3rd and Sam Blaker (Thorpe Bay) 4th. Alice Lucy (Rutland) had a great weekend opening her series with a couple of 2nds to take 5th overall and first Lady.

RS Aero 9
The small but competitive fleet of RS Aero 9s raced tooth and nail all weekend with all the sailors very closely matched in the medium breezes and flat water. Any gains made were really hard earned! Chris Larr (Northampton) made the early running but a win in the final race gave the series to Peter Barton (Lymington Town) with Chris 2nd and Greg Bartlett (Starcross) 3rd.

Race 1 started with light winds, a long square line and a nice long beat. Coming into the windward mark from the right Nigel Rolfe (Burghfield) took an early lead which he extended. The second beat saw another right hand shift which allowed those who chose the unfavoured port gate mark to actually make up some positions on the next beat. The final run saw a first penalty from the Jury boat to Will Gifford (Whitefriars) and some warnings after the race for those on a ‘yellow light’. Nigel held on to the win followed by David Ellis (Lymington Town) and Chris Jones (Sutton Bingham). Ellie Craig (Draycote) picked up 4th after claiming 3 positions on the final run.

Race 2 saw a slight committee boat favoured line and another right hand shift up the beat. Noah Rees (Torpoint Mosquito) went back thinking he was over, though later found out he was not. This allowed Chris Hatton (Bowmoor) clean air off the line and to the windward mark first followed by Nigel Rolfe. Nigel was quick downwind and managed to close on Chris. The wind was beginning to pick up, Chris worked hard to keep the lead and the race finished Chris, Nigel then David.

Race 3 saw the first general recall and straight into the Black Flag. Everyone went a tad line shy as a result, with Chris, Noah and Mark Riddington (Emsworth Slipper) starting a boat length in front of the rest of the fleet allowing Chris to make the windward mark first again with a healthy lead to Tim Hire (Royal Lym). Despite being 15kg heavier than Chris, speedy Tim ate up the 30 metre gap and sailing straight into the lead on the first run. Tim was able to keep the lead in the increasing breeze, Chris followed up in 2nd with Noah 3rd.

Race 4 was the windiest race of the weekend. It was also the coldest with sleety rain and about 3 degrees! The line was still committee boat favoured for this race, however, Noah and Chris started near the pin and made the windward mark 1st and 3rd with Tim in between. An intense battle ensued between the three of them, with the trio ending up pulling out an immense lead over the rest of the pack by the finish. Despite the battle and constant changing off positions, they ended up in the same order they went around the windward mark.

After day 1, it was looking close. Chris had a small lead, but Tim, David, Mark and Noah were all easily within striking distance.

Sunday morning looked like it may be a breezy day but by the time of Race 5 it was dying off a little. This time the beat was shorter and a few boats overlayed the mark, coming in hot and fast. With the remaining beats quite short and biased in the wind shift, there were very few opportunities to make up positions. Noah lead most the race with Tim second and Simon Geyman (Datchet Water) 3rd. Simon rounded the windward mark 1st, 3rd and 1st in races 5,6,7 coming of the pin end and waiting for the shift from what was a committee boat bias end every time.

Race 6 had Mark leading most the race followed by Chris, Tim and Noah. However on the final beat, Chris boldly went right when left had paid every other lap, and ended up with a healthy lead at the finish. On the final run Noah got an overlap on Tim and was able to pinch 3rd.

Race 7 was now the decider for the event. Chris was leading with 13pts, from Tim on 14pts and Noah on 15pts. Chris was looking good if there was to be a tie break. Chris went midline, with Tim and Noah at the committee boat end. Early on the fleet all got lifted on starboard, looking like Chris was behind. However, all day left had paid and later on up the beat Chris was able to cross Tim and Noah and be second round the windward mark with Tim and Noah in 5th and 6th. Noah ended up doing 2 sets of 720's putting him in the mid teens. Chris then focused on covering Tim and lost ground, dropping to 4th and after a shift also allowed Tim through into 3rd but managed to grab the position back on the run. Someone flicked a switch for the final beat as the wind dropped. Chris knew he just had to sit on Tim closely and not let him by. The lighter breeze paid into Chris' favour and he actually popped into the lead whilst still covering Tim. The wind then went right and from absolutely nowhere, Noah appeared not 15 metres down on Chris after banging right. Noah briefly got through nearing the line. Albacore World Champion, Nev Herbert (Lymington Town), came charging out of the left having passed wind near the shore, as he claimed the lead just before the line with a shortened course at the windward mark. Noah was now second and Chris had lost a vital position to David Ellis. The event was going to Noah, until another shift got Chris back in front of Noah. An intense tacking battle took place between Chris and Noah. Noah clipped Chris' transom on a tack and took his 3rd penalty of the race. This gave Chris the event and Top Youth too. Dropping down the 8th Noah ended up 3rd overall. Despite finishing 15th Tim held onto 2nd overall. David took 4th and Mark 5th. Top Lady was Ellie Craig in 12th and Top Master was Nigel Rolfe in 7th.

Huge thanks to Draycote Sailing Club for being excellent hosts and providing excellent racing , master minded PRO Matt and local RS Aero sailor Richard Pye. Thanks to Ellie Craig for cooking curry for 40 odd on Saturday and to National Judge, David Battye, for helping to improve the fairness and quality of our racing including educate the fleet with his excellent debrief and tutorial pre dinner. Rooster provided a generous spread of excellent prizes to help keep sailors warm and comfortable during the winter ahead!