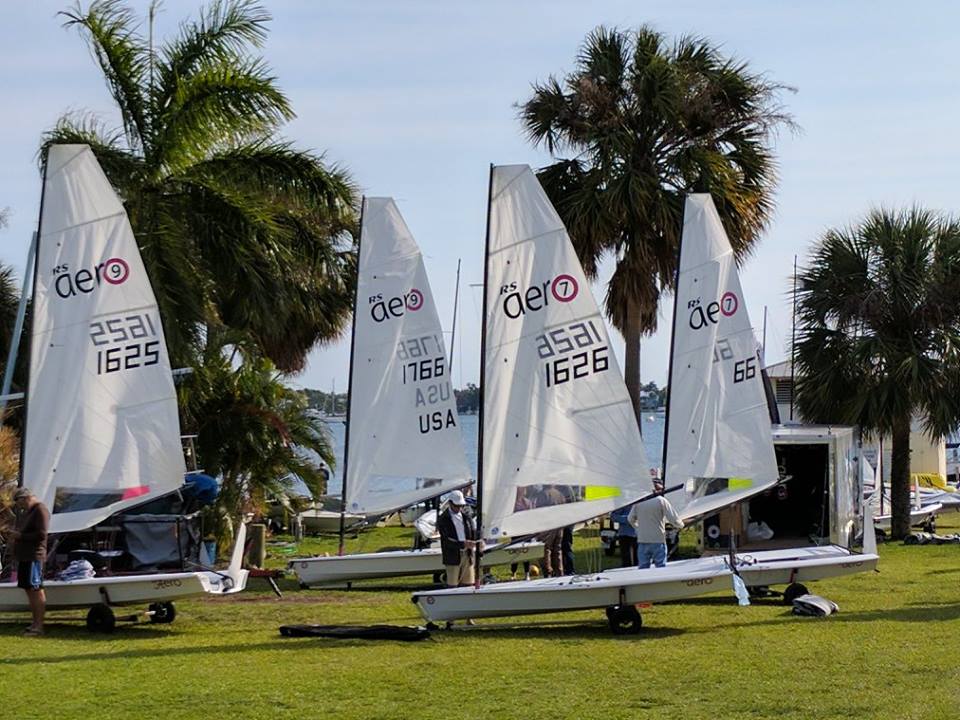 08/02/2017 22:24:55
RS Aero Florida Winter Series a Success!
Many thanks to Greg Popp for his in depth account of all the Fun in Florida...
Regatta Number One
RS Aero North American Midwinters - Palm Beach, Jan 27-29
Highlight movie
The 2017 RS Aero Florida Winter Series has concluded, and by all accounts it was a roaring success. Initially there was a single regatta, the RS Aero Midwinters, conceived by Paul Gingras of the Sailfish Club of Florida (where Paul has been the catalyst for development of an Aero fleet now numbering eight boats) and his other local club, the Palm Beach Sailing Club, as a jointly sponsored event. Recognizing that the expense and logistics to travel from distant venues to sail one regatta was a tough call, a movement to pair another regatta with the Midwinters took hold and was championed by Greg Popp, an avid Aero sailor from the Halifax Sailing Association in Daytona Beach. The concept was to offer two regattas on consecutive weekends bracketing a week of fun in the sun for racers and their families. The concept worked fabulously for those who took in both events.
The RS Aero Midwinters took place January 27-29 out of the Palm Beach Sailing Club in West Palm Beach. The RS Aero charter boat trailer arrived early that week followed by Marc Jacobi, Aero North America Class Manager with a trailer full of boats owned by fellow New England Aero racers. Some Thursday arrivals assisted Marc in getting the eight charter boats rigged and ready for Friday’s training sessions while Paul Gingras and some of his Sailfish Club team relocated boats from their fleet across Lake Worth to the Palm Beach Sailing Club. The stage was getting set for a great weekend. 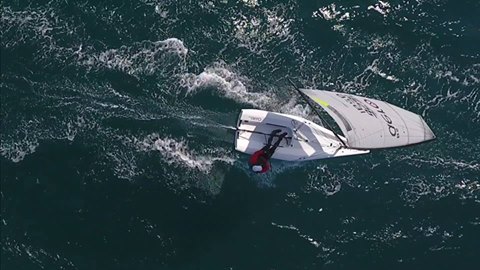 Friday dawned with partly sunny skies and a brisk north breeze moving in with a cool front passage. More arrivals for the regatta began filtering in and the lawn at the PBSC filled with Aeros of all three divisions, Aero 9, Aero 7 and Aero 5. Marc went through the charter boat assignment routine then late morning moved to his shoreside training session. For newbies to the Aero, Marc’s guidance is invaluable, as he has accumulated a wealth of Aero knowledge in addition to his many years of sailing expertise in Lasers. He shares these insights willingly, and on this day the sailors were all ears and eyes to learn from him. This included the existing Aero sailors who pick up more valuable hints and tricks from Marc at every training session.
Following a brief lunch break the boats were launched into Lake Worth lagoon for a series of on-the-water drills and exercises under the watchful eye of Marc. This proved to be a challenge of multiple proportions as the winds had filled to a brisk 12 to 18 knots with higher gusts. Capsize recoveries were an unplanned part of the drills but for some now included. Follow-the-leader “conga lines”, practice starts, tacks and gybes, and several practice races were the order of the day. RS North America Marketing Manager, Todd Riccardi, engaged professional sailing photographer McKenzie Wilson of Miami to capture the sailing both in stills and video, including drone shots from above. McKenzie was also offshore for Saturday’s racing and caught the action there. She assembled a really great video of all of this that can be found on YouTube. 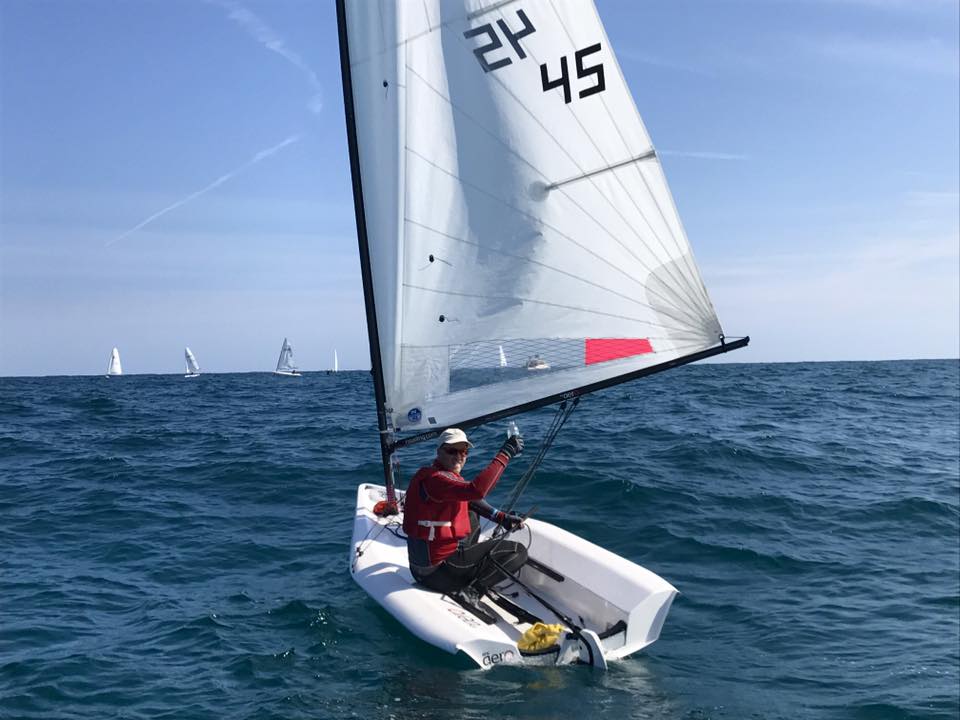 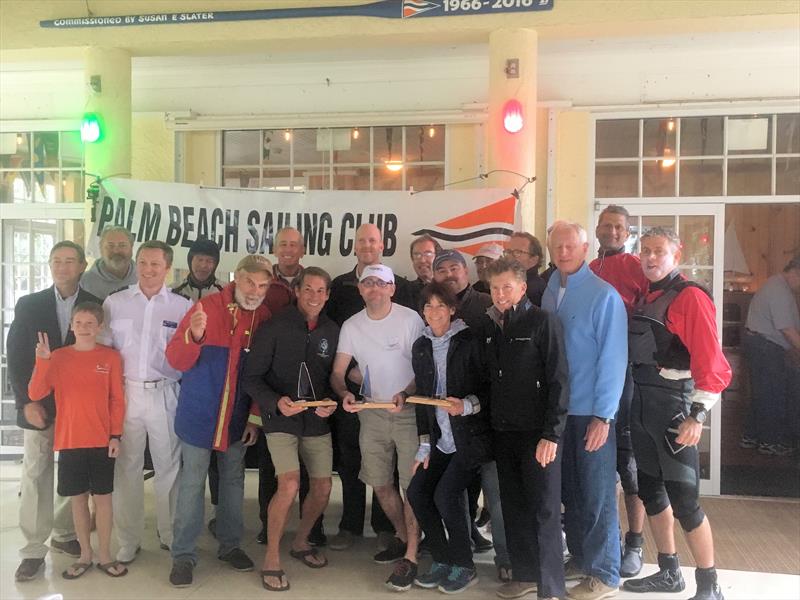 The Regatta and day ended with a tired and wet, but happy group of sailors convening for the presentation of awards to the champions in the respective divisions. Warm appreciation was extended to the host organizations, the Palm Beach Sailing Club and the Sailfish Club of Florida, the organizers headed up by Paul Gingras, the Race Committee and other volunteers, and to all the competitors, especially those who had traveled far to participate. RS donated a new Aero sail for auction with bidding at the Midwinters and the Florida State Championships to decide the winner, the proceeds from which will be given to the hosting clubs.
As a first time event, the RS Aero North American Midwinters exceeded expectations in terms of entries, 26 being a record for the East Coast of the United States, and in excitement for the venue and gracious hospitality and professionalism shown by the host organizations. By acclaim it was agreed this is an event that should become a continuing part of the Aero regatta scene for the future.
Results and the Tale from the British tourist
Regatta Number Two
RS Aero Florida State Championships at US Sailing Center of Martin County, Feb 3-5 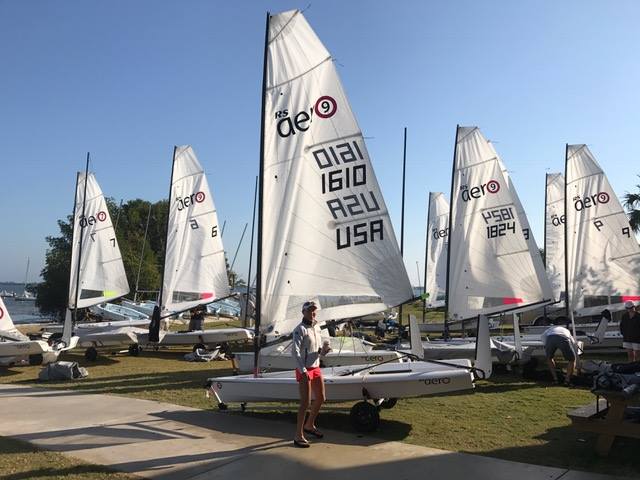 The second event in the Florida RS Aero Winter “Series” was the first ever Florida State Championships held February 3-5 at the United States Sailing Center of Martin County located along the Indian River lagoon in Jensen Beach, Florida. The setting proved spectacular in terms of facility, race management, hospitality, location and weather for the eighteen racers that signed up for this second largest US East Coast RS Aero event. The mix of sailors that registered included several that had competed the weekend prior in Palm Beach, Marc Jacobi, Eric Aker, Tony Corkell, Madhaven Thirumalai, Paul Gingras, Micahel Housely, Danielle Chandler, Bill McKenzie, and Greg Popp. There were several competitors new to the Aero to include Olympic level sailors Monica Wilson and Dave Chapin. For those who made the trip to Florida for a sail, vacation, and sail, they were treated this weekend to Chamber of Commerce weather with azure skies, warm temperatures that reached into the 80s, and delightful winds of 8-15 knots for the majority of the event.
Friday offered ideal training conditions for Marc Jacobi’s shore side and on the water introduction to the Aero. More follow the leader, tack and gybe, practice starts on very short lines, and practice races including the moving mark boat, made for interesting sailing for the contingent on the water. The last activity was a one by one sail by for photos of the sailors for a later surprise. 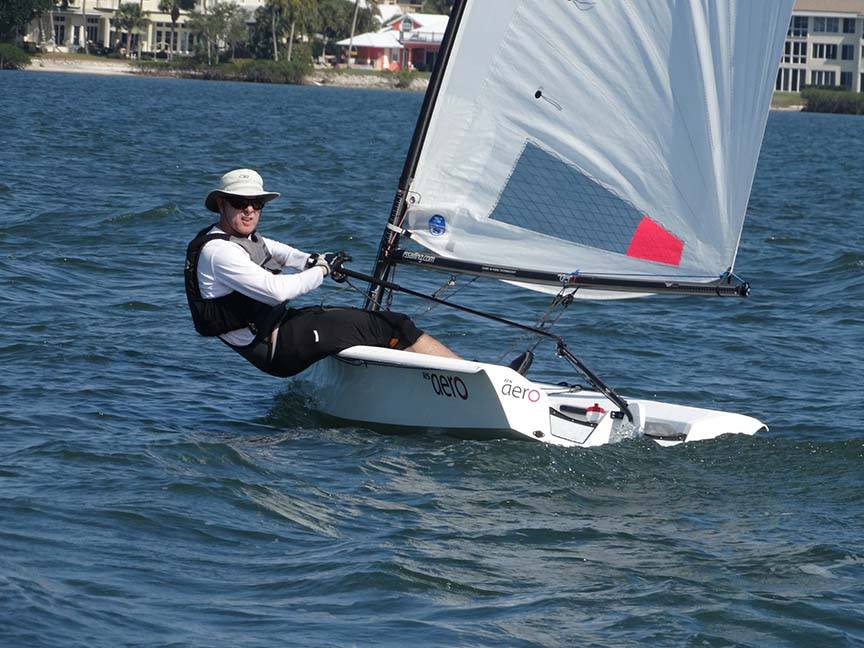 Saturday was a picture post card perfect day with abundant sunshine and a 10-15 knot northeast breeze. Following the competitors meeting on the upper patio of the Sailing Center, the fleet launched off the beach and sailed to the race area north of the Stuart Causeway. There the Race Committee set the course of two windward, leeward legs with a starboard broad reach to a gybe mark followed by a port broad reach to the leeward mark and a short beat to the finish. The winds stiffened through the course of the racing leading to planing conditions and rigorous weather work. An additional race was added to make for five for the day and an opportunity to run only three the following day so that all might get in early on Super Bowl Sunday.
The racing was extremely competitive in both the 9 and 7 divisions, no 5 rigs were sailed in this regatta. The sailors tuned into the conditions recognized the presence of an increasing tidal current that favored the west side of the course aiding the beat to the windward mark. For day one, in the 9 rig group, Marc Jacobi continued to demonstrate his prowess in the Aero with straight bullets. First timer in the Aero but very talented racer Dave Chapin gave Marc a contest but was also challenged by Madhaven Thirumalai, exchanging positions in several of the races. Additional newcomers Bill McKenzie, Brian Gilcher, and Jerry Sliwinski, were always close and giving the leaders much to think about in all of the races. Favoring a troubled back, Greg Popp stuck out the five races but trailed the group for most of the day. He kept new to dinghy sailing but pluckey Michael Housely company encouraging him to not be reluctant to “mix it up.” 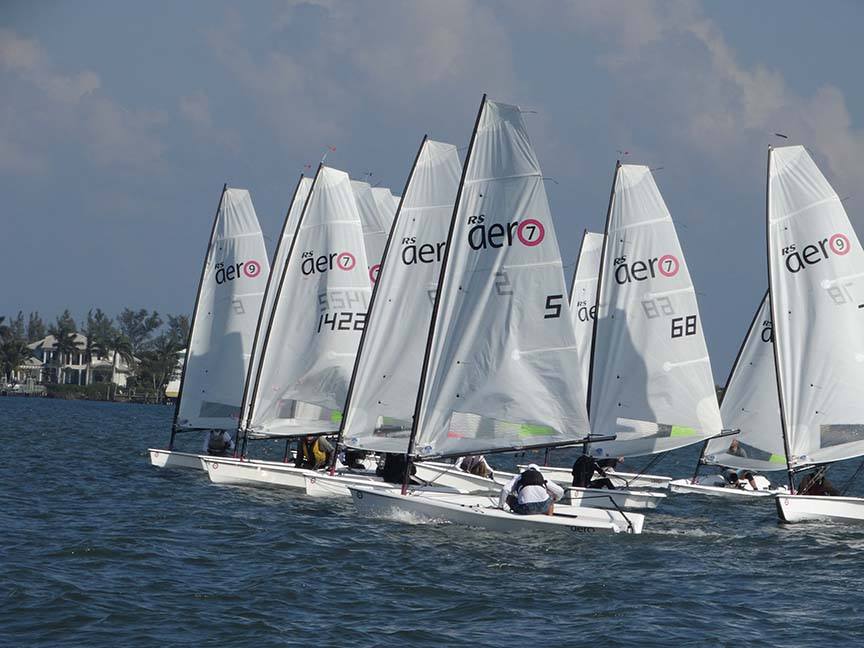 In the 7 rig group the lead was exchanged repeatedly between most of the sailors. Brand new to the Aero but a skilled Laser sailor, Peter Hansen, sailing in his home waters, finished the day in first place closely followed by Aero veteran Eric Aker, and Olympic sailor, Monica Wilson, who was also sailing out of her home club. In the mix early was Simeon Thomas who made the trek from Colorado to sail and enjoy a warm weather respite. Always in the running were Dave Solnick, an Aero and RS 100 sailor from NYC, and new to Aero and dinghies sailor, Ross Martin. Persistent with her commitment to learn the Aero but probably having the most fun based upon the degree of laughter heard by all was Danielle Chandler.
As the racing ended the fleet made their way back to the Sailing Center, secured the boats and went off for the evening. About twenty folks made their way for a group dinner arranged by Greg Popp at Tony Roma’s restaurant dining al fresco under the stars while serenaded by what some described as a wounded duck. Notwithstanding the painful renditions of popular music, the food and drinks were almost as good as the camaraderie and the night grew long with stories and laughter. 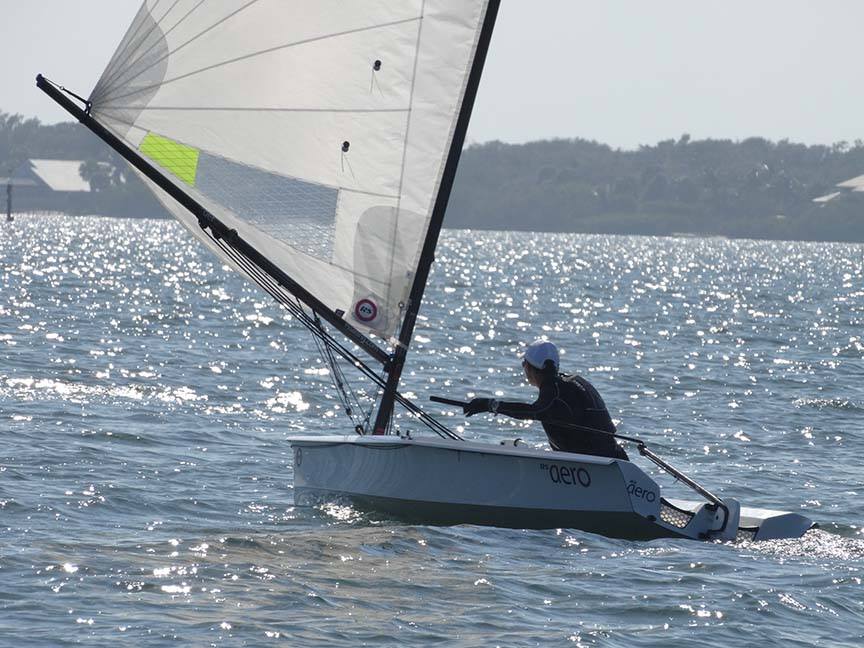 Sunday brought with its arrival more warm temperatures and sunny skies with lighter breezes offering opportunity for those skilled in lighter air to advance. In the first race the disappearance of the breeze resulted in an abandonment much to the dismay of Paul Gingras who was in a leading position amongst the 7 rig division. As the wind filled back in changes in lead positions occurred amongst the 7 rig group with Monica Wilson and Tony Corkell moving up in the standings. However, Peter Hansen retained his first place position with strong finishes ending the regatta as the leader. Monica and Eric vied for second but Eric won out as second overall and Monica came in third. Tony showed improvement in his finishes for each race of the event and ended in fourth with the rest in trail.
In the 9 rig division, the battle between Marc Jacobi and Dave Chapin continued with the finishes ever closer including one bullet for Dave. Madhavan pressed both of them and was in turn pursued by Bill McKenzie who finished in a tie with Brian Gilcher, both new Aero sailors but accomplished Laser sailors. Jerry Sliwinski was so taken with the Aero that he made the decision to join the Aero owner family and pulled the trigger on acquiring one. 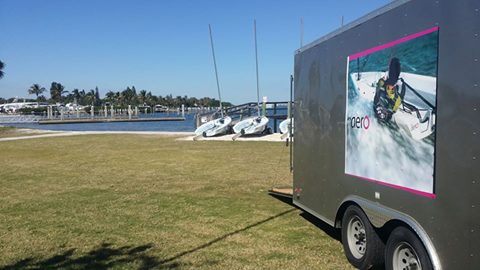 Back at the Sailing Center, the fleet began the process of getting ready to depart but took time out to join in the closing ceremonies and awards presentation. Thanking the host US Sailing Center of Martin County, the Race Committee, other volunteers, Sandy Point and Masthead for the morning snacks, RS for the donation of the auction sail, and all of the competitors for making the first time Florida State Championships a resounding success, Greg Popp polled the group on the two regatta series and interest for the future. The response was a resounding, let’s do it again next year! Greg then proceeded to present to each participant a surprise, a framed photo of them sailing the event with those finishing in the victory positions receiving recognition of their accomplishment. Each sailor had something more to take away then just a memory, a treasure of the experience to hang on the wall or to rest on a desk. For those out of the ”money” it was particularly special without detracting from the achievements of the winners. The auction of the Aero sail was won by Dave Solnick who was the top bidder and the proceeds going to support the two events, a win for all.
With the series concluded, the boats were packed up, trailers and racks loaded, and farewells conveyed with all looking forward to the next opportunity to once again sail the Aero.
Results and Photo links
Peter Hansen, Danielle Chandler, Dave Chapin, Monica Wilson and Simeon Thomas with Greg Popp. 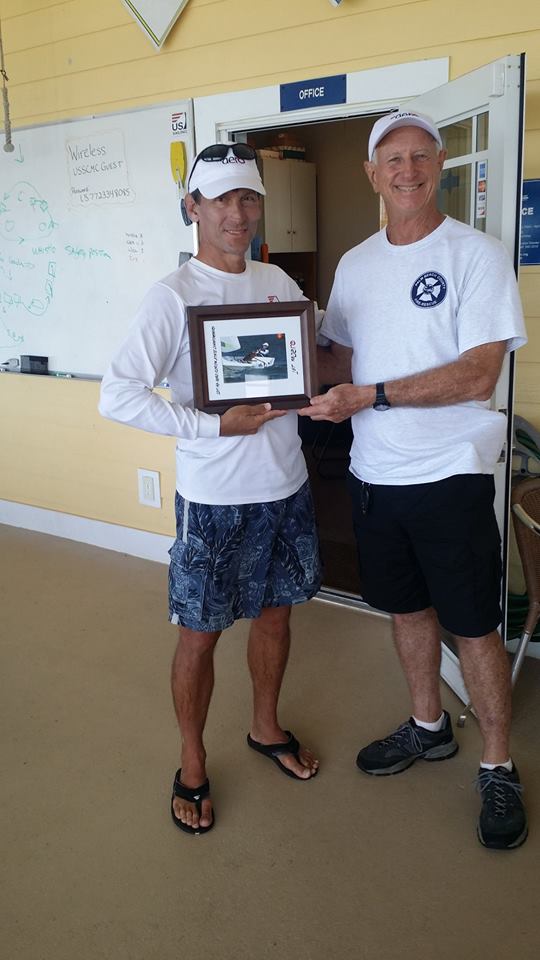 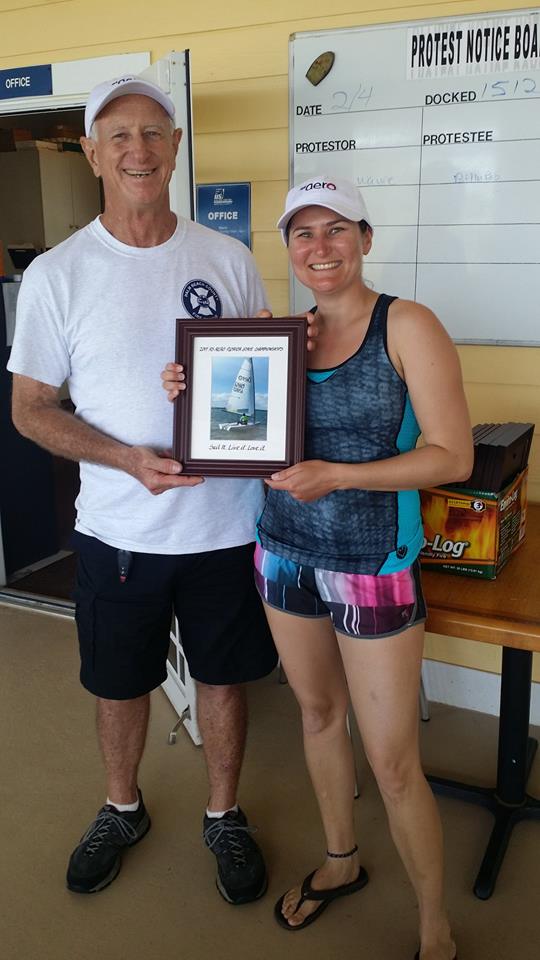 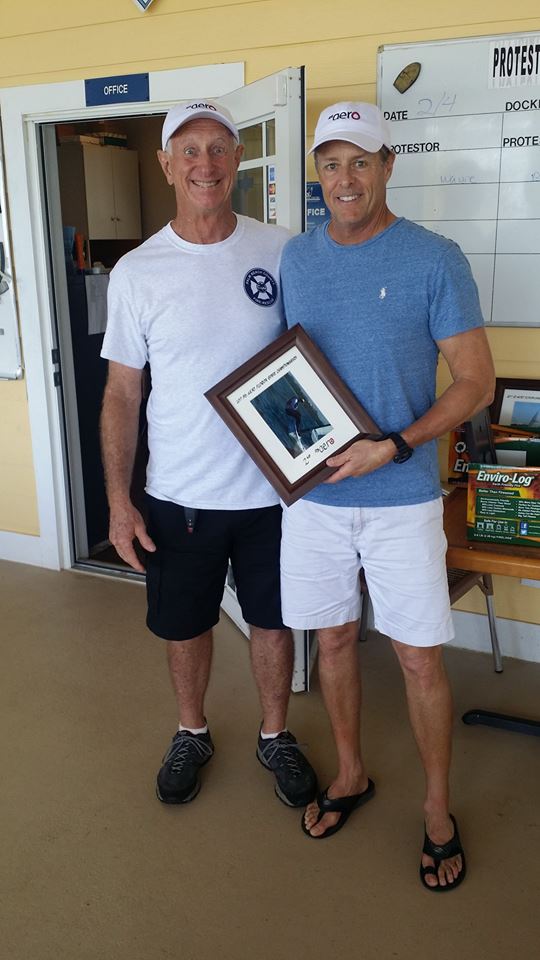 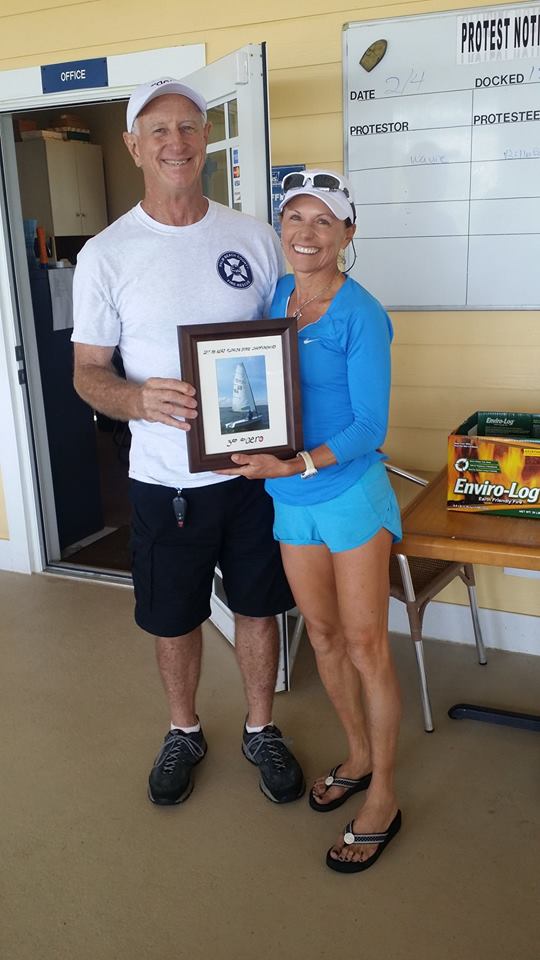 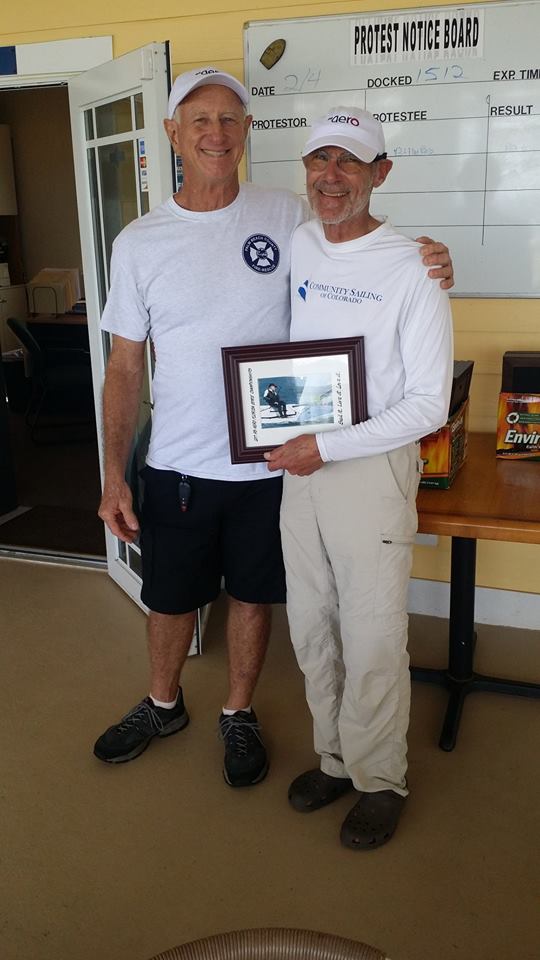